Shots of a Lifetime

Share All sharing options for: Shots of a Lifetime 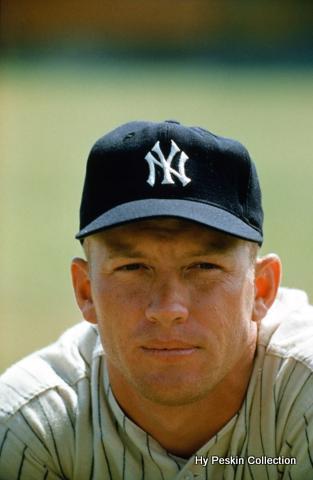 Via Mike Scioscia's Tragic Illness and UniWatch, check out this this sumptuous archive of portraits and action shots from former Sports Illustrated shutterbug Hy Peskin. Hired as the first staff photographer for the magazine in 1954, Peskin shot more than 40 cover photographs, including some of the most iconic in the magazine's history. Prior to coming to SI, he'd made a name for himself by seeking out unusual vantage points and covering the action from ground level rather than the press box, and some consider him the greatest sports photographer of all time. Oddly enough, Peskin left the field in 1964, choosing not only to devote himself to philanthropy but to change his name to Brian Blaine Reynolds. Go figure.

In any event, his work still stands on its own merits. Full of saturated colors typical of the era, Peskin's baseball shots include the requisite famous names — Hank Aaron, Willie Mays, Frank Robinson, Ted Williams, Mickey Mantle, Stan Musial, Whitey Ford, Casey Stengel and so on — but some of the most striking photos in the collection are of scrubs like Rocky Bridges and Lou Skizas who just happened to find themselves in the middle of a well-composed shot. Even in the low-res digital versions of these museum-quality shots — prints of which you can purchase via the site — you can see uniform details you might not have noticed before, not to mention color shots of ballparks consigned to a dusty sepia-toned corner of collective memory. Ebbets Field, anyone? 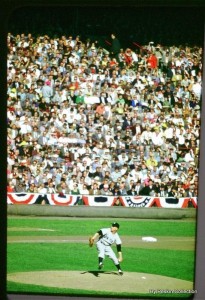 Whitey Ford pitching Game Five of the 1957 World Series in Milwaukee, as photographed by Peskin.

Check out the compact Rickey Henderson-like batting stance of Phillies catcher Stan Lopata, the high leg kick of Juan Marichal, the grace of Mays chasing down a ball in center, Williams' gift of gab whether he was talking about hitting or fishing, Herb Score bringing it, Duke Snider staring off into the distance, Aaron wagging his bat, Sal Maglie glaring like a guy who'd earned his nickname, "The Barber," Roy Campanella watching the ball fly off his bat. Even if you can't afford a print for yourself, dig into this feast!