Liriano: the One the Yankees Have Been Waiting For?

Share All sharing options for: Liriano: the One the Yankees Have Been Waiting For? 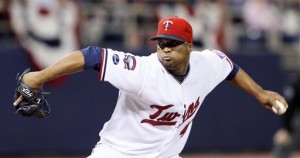 The Twins may look to trade Francisco Liriano, providing the Yankees with another opportunity to acquire a frontline pitcher. (AP)

According to a report from the Minneapolis Star Tribune, the Twins may consider trading Francisco Liriano. The 27-year-old lefty, who after three years in the wilderness following Tommy John surgery went 14-10 with a 3.62 ERA and 201 strikeouts in a career-high 191.2 innings last year, is eligible to become a free agent following the 2012 season. His trade value may never be higher, as the Star Trib's Joe Christensen writes:

One thing is clear: The Twins don't plan to sign him long term. Last weekend, they avoided arbitration with a one-year, $4.3 million deal. From what I've heard, their long-term talks went nowhere, with Liriano's camp hinting it wanted a three-year, $39 million contract.

... Liriano might look like a blue-chip stock again, but rather than investing big, the Twins seem content to maximize his current value. They can tap him for about 65 starts over the next two seasons and collect two draft picks if he leaves as a free agent. Or they can trade him.

Christensen notes that the Twins are concerned about Liriano's injury history (he made just 58 starts from 2006-2009), his violent delivery, and his tendency to rely heavily on his slider. At a time when they have five other healthy starters and a coming top prospect, he reasons, it may make sense to move Liriano.

The irony is that with their payroll already nearing $100 million for the second straight year — a justifiable expenditure given that they moved into brand new Target Field last spring — the Twins just created this glut for themselves by re-signing Carl Pavano, a pitcher with less upside and an even spottier injury history than Liriano, to a two-year, $16.5 million deal. If the reports are accurate, general manager Bill Smith and company appear to prefer the unpredictability of Pavano to the unpredictability of Liriano, with whom the Twins brass clashed several times over communication issues, both before and after his elbow injury. It's not a choice I'd make as general manager, particularly if my team were able to mint pitch-to-contact strike-throwers such as Pavano at will; while the Twins have had some success going that route, Liriano's the closest thing they have to a true ace, and those kinds of electrifying pitchers only come around so often.

Of course, the last time one did come around the Twin Cities, the team preemptively decided to trade him as well once free agency approached, and it didn't work out very well. After fielding offers for two-time Cy Young winner Johan Santana — a southpaw with a much cleaner bill of health — in the winter of 2007-2008, the Twins finally came away with a very meager return. None of the four players they received from the Mets (Carlos Gomez, Philip Humber, Kevin Mulvey and Deolis Guera) were of much use in the long run. Gomez hit a meager .248/.293/.352 in two years with the team, then was dealt to Milwaukee for J.J. Hardy, who gave the Twins a decent year and then was flipped to Baltimore. Humber and Mulvey combined for just 23 innings in Minnesota before moving along to other organizations and fading even further into oblivion. Guera went 2-13 with a 6.36 ERA split between Double-A and Triple-A last year. While the latter's just 21 years old and may still have a future, so far that's a big sack of nothing for an ace, and while things haven't turned out happily ever after since the Mets signed Santana to a long-term extension, the Twins couldn't have done much worse if they tried.

Then again, Santana had just one year to go on his deal, where Liriano has two, and as the Star Trib article points out, recent deals in which the Royals traded Zack Greinke (who has two years of club control still to go) and the Rays did the same with Matt Garza (who has three years to go) provided stronger yields. One would expect the Twins to have learned from their mistakes and the successes of others; putting Liriano on the market now would seem to indicate exactly that.

For the Yankees, who failed to restock their rotation this winter — you may have heard something about that, both here and elsewhere – the news of another frontline pitcher coming onto the market should certainly pique their interest. What's appealing about Liriano is that he misses bats (his 9.4 K/9 ranked fifth in the majors among ERA qualifiers), generates a ton of groundballs (his 53.6 GB% ranked eighth among same) and avoids the longball (his 0.4 HR/9 ranked fifth as well).

That the Twins already have catcher Joe Mauer and first baseman Justin Morneau locked up long-term means that they may favor a package which doesn't include Jesus Montero, though of course they may be wary of his receiving skills and envision him as a DH in the short term, content to worry about his position down the road. Even without Montero, the Yankees do have the prospects to make a deal, particularly when it comes to pitching. On the other hand, this is a pitcher with just one 30-start season under his belt, and between his injury and his other issues, he's got a bit of baggage, so there may be a point where the price for the Yankees becomes too steep. We'll see if Smith and Brian Cashman can find any common ground to make something happen.