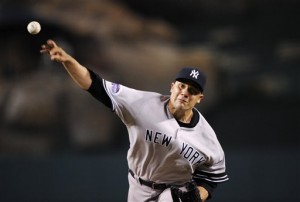 Now that he's signed with the Red Sox, the Yankees will get a different view of Alfredo Aceves then they had before. (AP)

In the annals of the Northeast Corridor's most famous baseball rivalry, the signing of former Yankee reliever Alfredo Aceves by the Red Sox isn't likely to rank high on the list of impact moves. It won't count as revenge for the transfers of Babe Ruth, Herb Pennock, Waite Hoyt and so many others from Boston to New York from 1919 to 1923, moves which shifted the AL's balance of power for decades and carried symbolic power for even longer. It could hardly have less impact than Billy Traber's one-and-done stint with Boston in 2009, but it almost certainly won't have more than David Cone dignity-salvaging stint in 2001 following a dreadful finale in the Bronx.

And it almost certainly won't help the Yankees as much as when Ramiro "Covert Operative" Mendoza signed with Boston as a free agent in December 2002 and gave the Sox 97.1 innings of 5.73 ERA ball for their $6.5 million over the next two years. Nonetheless, Mendoza is the player who always comes to mind when discussing Aceves, an effective swingman who could spot start or pitch effective middle relief, a guy who could come in with men on base and extract the Yankees from a jam in a high-pressure moment. Though he's a flyballer where Mendoza was a groundballer, Aceves showed signs of being That Guy during his 2008-2010 stint with the Yankees after they plucked him out of the Mexican League.

After rocketing through three levels in their minor league chain, Aceves joined the Yankees in September 2008 and helped to patch a rotation that had been decimated by injuries. He followed that solid showing with a strong season out of the bullpen in 2009, going 10-1 with a 3.54 ERA, 3.44 Fair Run Average, and 2.5 WXRL, third on the team. He missed most of 2010 due to a herniated disc; his problems began in spring training and ended his season at the big league level in mid-May, after he'd given the Yanks just 12 innings. Further troubles during his rehab in August led to his being bypassed when the September callup invitations came.

Aceves probably would have remained a Yankee had it not been for the broken left clavicle he suffered in a bike accident in Mexico in late November. The fracture was serious enough to require surgery, and because the Yankees felt it likely he'd miss at least part of spring training, they nontendered him in early December, and would only offer him a minor league contract. The Red Sox offered Aceves a major league deal worth $650,000 plus another $100,000 in incentives; the Mets made a major league offer as well.

What exactly the Sox will get for their money is an open question. Aceves is reportedly throwing bullpen sessions already and is ahead of schedule in his rehab, but in February, hope springs eternal, and nearly everybody says they're ahead of schedule. While it's true that fractures tend to heal more easily than strains or sprains, when surgery is involved, it's a different story, and even if Aceves' arm is sound, there's always his balky back — which wasn't surgically repaired — to contend with. Presuming that the Red Sox are smart enough not to push him in the early going, if he's healthy they'll find themselves with a pitcher who can fill in for a short stretch if one of their starting five goes on the disabled list, or throw long and middle relief if he's in the bullpen.

PECOTA, which knows nothing of Aceves' injuries but recognizes his uneven workload, projects him for 61.2 innings of 4.18 ERA ball, split between the bullpen and the rotation. Coming at it from a different angle based upon his major league stats and the so-called Rule of 17, Baseball Prospectus addition R.J. Anderson estimates that Aceves can provide a 3.16 ERA out of the bullpen and a 4.16 ERA out of the rotation, with strikeout, walk and ball-in-play rates in the neighborhood of the A's Dallas Braden. That said, a modest strikeout rate and flyball tendency plays better in the spacious Oakland Coliseum than in cozy Fenway. The Sox don't have a rotation vacancy at the moment, but given the injury histories of Daisuke Matsuzaka and Josh Beckett and the shakiness of ageless knuckleballer Tim Wakefield, their ranking rotation reserve, they could use the depth.

Of course, it's tempting to wonder whether Aceves could have filled one of the back-rotation vacancies the Yankees currently have; Aceves' projections and his level of experience certainly trump most of the other candidates. Then again, the Yanks are more acutely aware of his medical situation and his limitations, and that they decided to pass on him even past the point of Andy Pettitte's retirement is somewhat telling. At the very least, this is something of a challenge signing, with one rival daring the other to squeeze more out of Aceves than they themselves thought he could give. We'll see how that pans out.