Chavez: Pulling Mussels from an Empty Shell (or "Cruz was a Bernie, But We Never Knew It")

Share All sharing options for: Chavez: Pulling Mussels from an Empty Shell (or "Cruz was a Bernie, But We Never Knew It") 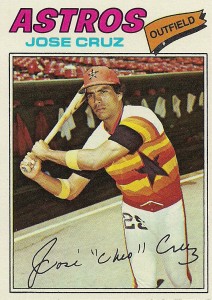 Jose Cruz: Lost in Houston, Not Rescued by the Yankees

Looking back at Cliff’s post on the signing of Eric Chavez, I was reminded of Jose Cruz, the father of the Jose Cruz who played in the majors from 1997 to 2008. Jose Jr. was just an okay-player for most of his career, but Senior was brilliant. This fact was largely lost for most of his career for three reasons: he got a late start on wonderfulness, not breaking through until he was in his late twenties; he did it as a member of the Houston Astros; the offense-suppressing nature of the Astrodome, combined with the generally low offensive levels of the 1970s and early 80s meant that his numbers rarely leaped off the back of his baseball card.

Baseball had a well-kept secret in Cruz, who made only two All-Star teams in a 19-season career, and it would have been wonderful to see him in a major market in a ballpark that would have helped instead of hurt him. Put that same player in last year’s Yankee Stadium and you would get some .350 /.420/.510 seasons.

Or was it? The Yankees decided to give him a try as a reserve. At last, Cruz would have the audience he deserved. Not that the Yankees had anywhere to play him—Rickey Henderson and Dave Winfield had iron grips on the corner, and although Cruz had been an overqualified defensive left fielder in his prime, teams generally don’t ask 40-year-olds to run around center. The Yankees went with Claudell Washington and a collection of platoon partners that included a young Roberto Kelly and an old Gary Ward. They had also signed Jack Clark to be the regular DH. When Clark missed a few games in April, Cruz got in some playing time, but otherwise he was primarily a pinch-hitter in a league where pinch-hitters aren’t much in demand. The Yankees’ shortstop that year was Rafael Santana, so the team had some special needs that, say, the current model generally doesn’t in needing to get a bad bat out of the way in the late innings.

This is a hard way to make a living, especially when you’ve been playing every day for close to two decades—Cruz had entered the minors in 1967, Lyndon Johnson time, and here he was in the last year of Ronald Reagan, trying to learn new tricks with a diminished skill set. He hit .158 in 19 plate appearances as a pinch hitter and .286/.362/.333 as the DH. His Yankees career climaxed on July 16, Old Timer’s Day. The Yankees trailed 6-0 going to the bottom of the seventh with Melido Perez pitching for the White Sox. Winfield opened the inning with a ground single, Washington doubled him to third, and Wayne Tolleson drew a walk to load the bases and bring Santana to the plate. Manager Lou Piniella called for Cruz, who promptly lined the first pitch he saw down the right field line for a grand slam. It proved to be New York’s only offense of the day.

Cruz made one more appearance three days later, a start in right field in which he went 0-for-4. On July 21, the Yankees made the infamous Jay Buhner-for-Ken Phelps deal. Cruz was a casualty of the deal, as he was released to make room on the 25-man roster for Phelps. His major-league career was over.

Once upon a time, Eric Chavez was an excellent player. The 10th pick in the first round of the 1996 draft, he latterly proved to be the best player selected in the round. A left-handed power-hitter who could not be held even by Oakland’s unforgiving ballpark, he also won five Gold Gloves. Just as he should have been reaching his prime, the injuries set in and robbed him of both his ability to stay on the field and to do anything useful while on it.

As with Cruz, it would be wonderful if the Yankees got the guy he was instead of the guy he is. We can dream of Chavez rediscovering those skills, but just as it was too late for the Yankees to see the Astros star of the 1970s and 80s in pinstripes, it seems a near certainty that whatever made Chavez a special player was sluiced down the drain the last time the Oakland trainer’s room was cleaned. There is no harm in giving him a try, but ah—what we might have seen.