You Get What You Pay For

Share All sharing options for: You Get What You Pay For 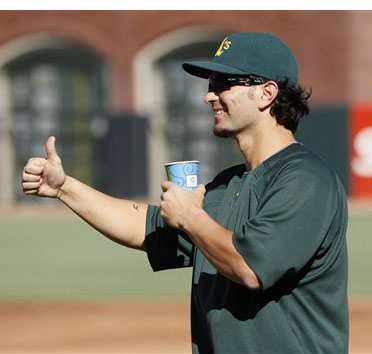 Eric Chavez has been a cheerleader more often than an active player the last three years. (AP)

Pitchers and catchers report a week from today, but we're still waiting for the Yankees to announce their full list of non-roster invitees. The Yankees did sign two veteran infielders to minor league contracts on Friday, however, which means that eventual list of NRIs, which I'll break down in full a week from today, will include Eric Chavez and Ronnie Belliard.

Chavez, who hit 20 home runs and won the Gold Glove at third base in six straight seasons with the A's from 2000 to 2006, is the sexier name in that duo, but he's no longer the player the Yankees often coveted before they acquired Alex Rodriguez. A litany of shoulder, back, and neck injuries and surgeries have completely derailed the 33-year-old's career to such a degree that its an open question whether or not he has anything left to contribute to a major league team. Over the past three seasons, Chavez has hit .222/.265/.330 in 249 plate appearances over 64 games, while spending 459 days on the disabled list, according to the Baseball Injury Tool. The 33 games Chavez appeared in last year were his single-season high during those three years, but he spent just five innings in the field, all of them at first base. At this point, Chavez looks like a designated hitter who hasn't hit a lick since 2007 and hasn't been meaningfully above average since 2004 (from 2005-2007 he hit .253/.331/.451 for a 105 OPS+). I want to draw a comparison to Nick Johnson here, but that would be unfair to Johnson, who was both healthy and productive in 2009.

As for Belliard, he represents an offense-first utility infield option, or would if he could play shortstop (he can't). Belliard was never a star like Chavez, but from 2004 to 2009 he hit .282/.336/.433 (103 OPS+) for the Indians, Cardinals, Nationals, and Dodgers, reaching double-digits in home runs every year. That's not much, but it's more than the Yankees could expect from Ramiro Peña or Eduardo Nuñez. The combination of Peña's glove and Belliard's bat would be preferable to having both Peña and Nuñez on the bench, or it would if the Yankees could be confident that Belliard can still hit. Unfortunately, the player whose attitude, appearance, and 5-foot-10 frame once earned him the nickname "Mini-Manny," will turn 36 during the first week of the season, is coming off a Chavez-like .216/.295/.327 season for the Dodgers, and has never been known for keeping himself in shape.

One can transfer those doubts about his bat to his fielding as well. Belliard's defense has always been a bit of a puzzle, with advanced metrics varying wildly from year to year. In the past he has shown some flare at the keystone, but one wonders how much those nifty glove flips distract from a lack of range. His lack of exposure at shortstop and increasing deployment at the infield corners the last three years says a lot about how his managers have evaluated his work in the field. I can't call him a liability out there, but I can just as easily see the 36-year-old Belliard being a disaster on both sides of the ball as I can see him being a useful right-handed bat that won't kill you in the field.

Because of their limited defensive profiles, the Yankees can't carry both of these men. They need someone who can play shortstop on the bench behind the 36-year-old Derek Jeter. However, I imagine Belliard has a leg up on Chavez, because he can play three positions and has hit at some point during the Obama administration. Of course, I wouldn't be surprised to see the Yankees head north without either man. After all, you get what you pay for.