Share All sharing options for: Pick a Peck of Pinstriped PECOTA Palookas 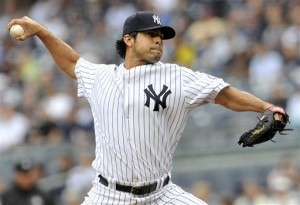 This morning, the first build of the 2011 PECOTA forecasts was released to Baseball Prospectus subscribers. For many of BP's readers (not to mention our writers), this glimpse of the coming season's projections is the equivalent of Christmas Day thanks to the built-up anticipation.

The PECOTA projections are based on a huge set of data consisting of tens of thousands of historical player-seasons dating back to World War II, incorporating not only major league stats but also minor league ones, age, position, player height and weight, and other variables. In their full form, BP presents the PECOTA projections across a range of possibilities — best and worst-case scenarios, select increments between those, and weighted mean projections — but at this point, all that's been released are the latter. Those numbers will undergo minor tweaks over the next several weeks via various refinements of the system, adjustments for playing time, changes of team and the rooting out of anomalies which worked their way into our numbers (take the under on J.P. Howell's 101 appearances, kids).

I tend to take a very cautious approach when looking at the first-run projections, but nonetheless, it's fun to peel back the paper and see what's in the box. So today I wanted to offer a glimpse at the pitchers in the mix for the Yankees' back-of-the-rotation spots, both the less-than-inspiring veterans and the various prospects who could work their way into the picture. Alas, since he didn't pitch in the majors or minors last year and wasn't in the forthcoming Baseball Prospectus 2011 — if that stops you from purchasing the book, then we were never really friends anyway — Bartolo Colon has yet to be projected, though I'm sure he'll get caught up in the next dragnet of notable non-roster invitees in need of some numbers.

Those aren't tremendously comforting numbers, but then, did you expect them to be? It's important to remember that these are really a shorthand way of expressing the average of a much wider range of possibilities, a range we won't be able to see until the PECOTA player cards, which contain all kinds of bells and whistles, are published sometime later this month. For now, this will have to do. If any of the names are unfamiliar, most of the prospects were discussed in Stephani Bee's Top 10 Prospects list back in August, and/or in Cliff Corcoran's more recent rundown of the in-house rotation options. The numbers above are their rate stats, with the last column the pitchers' Wins Above Replacement Player expressed on a per-100 inning basis, because the raw totals in the PECOTA release are based on more widely varying inning totals.

Collectively, the numbers say this is a wide-open race among various pitchers who project to be somewhere between below-average and replacement level, though there is at least safety in numbers. Because NuYankee Stadium is such a homer-conducive environment, the system expects all of these pitchers to struggle with keeping the ball in the park, with the flyballers — particularly the guys with the lowest groundball percentages such as Noesi and Garcia — understandably affected the most. It does see Betances, Banuelos and Noesi as having the healthiest strikeout rates, while it also sees all three "Killer B's" (Brackman being the other) as battling control issues. Which makes sense, given that none of that trio has much experience at the upper levels of the minors; Banuelos and Betances both have three appearances at Double-A for their high-water marks, Brackman 80.2 innings in 15 appearances. None of them is likely to jump to the big club's rotation without significantly more seasoning, which is why the raw PECOTA forecasts call for relatively few innings from the younger guys (Betances 58, Noesi 68, Banuelos 69.2) than from the older Brackman (119).

The biggest surprises have to be seeing the journeyman Mitre and the prospect Noesi atop the list. Mitre will turn 30 later this month, and to borrow a phrase from Casey Stengel, in 10 years he's got a chance to be 40. His lifetime 5.27 ERA in the majors is awful, but it also lags far behind where it should be based upon the combination of his pedestrian peripherals and a gaudy .315 BABIP; his lifetime 4.72 FIP suggests some room to grow if he gets better defensive support. Note that the superficially healthy-looking 3.33 ERA he posted in his 54-inning stint with the Yankees last year owed much to a .228 BABIP; his FIP was 4.69, so it wasn't like he was selling anything new. In any event, PECOTA seems to like his penchant for groundballs enough to suggest he may yet emerge as a somewhat competent pitcher.

Noesi, a nondrafted free agent from the Dominican Republic, is an intriguing candidate in a stopgap sort of way. He rocketed from High-A to Triple-A over the course of last year after being slowed by Tommy John surgery and a suspension for performance-enhancing drugs earlier in his career, tossing 160.1 innings across three levels, and putting up stellar peripherals (0.6 homers 1.6 walks and 8.6 strikeouts per nine) en route to a combined 3.20 ERA. Echoing Baseball America's view of him as having the best command in the system, PECOTA does like his control, seeing it as the key to overcoming his extreme flyball tendency in such a potentially inhospitable environment. As for his repertoire, his fastball generally ranges from 89-93 MPH but can touch 96; his changeup is his best secondary offering, and both his curveball and slider remain below average.

Note that Garcia, by far the most experienced of the bunch, doesn't offer a projection that's significantly more optimistic than most of the kids, because his flyball penchant makes him an uncomfortable fit for Yankee Stadium, and his lack of strikeouts doesn't help matters either. Because of his long track record, there's more certainty attached to his forecast, but I suspect once we see the full range of projections, we'll also see that he has a whole lot less upside than some of the youngsters. Likely the same holds true for Colon, though if I recall, the system is particularly wary of guys who miss full seasons. Kevin Millwood, whose name has surfaced in the past couple of weeks as another potential palooka, is projected for a 4.98 ERA, which is a nice way of saying, "don't bother."

The full PECOTA spreadsheet offers more projections for other Yankee farmhands like Steve Garrison, Adam Warren, D.J. Mitchell and Romulo Sanchez, but at the moment, those guys have to rate as longshots even among the longshots. I'll dig their projections up if they become relevant to the discussion, and I'm sure my fellow Bible Studiers will find ways to sprinke PECOTA dust into their entries here as well.