This Belated Day in Yankee History

Share All sharing options for: This Belated Day in Yankee History 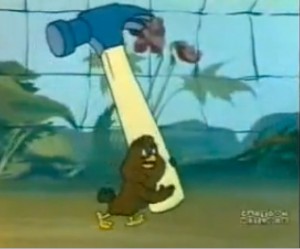 Like his animated cousin, Nelson "Chicken" Hawks was a pretty fair hitter.

While researching Wednesday's historically-minded entry — an exercise in slow-news-day-throw-it-against-the-wall-and-see-what-sticks-to-it-iveness — I wound up at the Society for American Baseball Research's Baseball Index, a tremendous resource devoted to tracking book and magazine articles about players and other personalities. I have to admit I did a major spit-take when confronted with the five-deep list of "Top Searches For This Month":

One of these things is not like the other... While wondering whether some prankster, pervert, or — pray to Jobu, please be the one — Looney Tunes fan was bombing the database, I finally stumbled across the logical reason for that outlying result: on February 3, 1896, future ballplayer Nelson Louis "Chicken" Hawks was born in San Francisco. Biiiiiig sigh of relief.

Like many a California ballplayer from back in the day when there were no major league teams west or south of St. Louis, Hawks got his start in the old Pacific Coast League, playing for the Oakland Oaks, whose future major league alumni would include Casey Stengel and Billy Martin. Hawks joined the team in 1918, played 62 games as their third baseman, and hit a thin .248 with one homer. He played just one game for them in 1919, then headed north of the border to the Calgary Bronchos of the Western Canada League, a short-lived circuit which also included the Edmonton Eskimos, Moose Jaw Robin Hoods, Regina Senators, Saskatoon Quakers and Winnipeg Maroons; sadly, the Medicine Hat Mad Hatters had ceased to be.

Though the statistical record is incomplete, Hawks won the league's batting title in 1920 with a .359 average, which must have brought him to the attention of some Yankee bird dog or another, because by the following season, he was in pinstripes, a reserve outfielder bearing witness to Babe Ruth's 59-homer season. Hawks played sparingly, but made the most of it, hitting .288/.333/.479 in 79 plate appearances, knocking his only two homers in a nine-day stretch in June when playing time was especially plentiful. Then again, the entire Yankee team hit .300/.374/.464, and the league hit .292/.356/.408, so it wasn't anything special, a 103 OPS+. Not surprisingly, he did not see action in the World Series, which the Yankees lost to the Giants, with whom they were still sharing the Polo Grounds.

Hawks disappeared back into the minors the following season, spending a year back in the PCL with the Vernon Tigers, where he was accompanied by Yankee teammate Ping Bodie, and two with the Nashville Volunteers of the Southern Association, where he was a teammate of future Hall of Famer Kiki Cuyler as well as obscurities with names like Lerton Pinto, Skipper Friday and Bevo Lebourveau. Hawks hit .339 in 1923, which ranked fourth among qualifiers; Cuyler was third at .340. After similar success the following year, he wound up back in the majors with the Phillies. This time he got a genuine opportunity, turning a few early hits off the bench into the starting first baseman job, getting blisteringly hot — he was hitting .402/.455/.625 through June 6, when he had 126 plate appearances — and finishing at .322/.387/.447, albeit in another high-offense environment. Those Phillies hit .295/.354/.425 as a team and finished third in the league in scoring, but with a league-worst 5.02 ERA, they went just 68-85 in the eighth consecutive losing season of a bleak streak which would reach 14 years.

Hawks apparently had better things to do than stick around for that. He spent the next five years knocking around the International League in places like Newark, Reading and Buffalo before heading back to California for one more year in the PCL. He was hardly alone in that regard; in those days, many a minor league masher, particularly a defensively challenged one — both FRAA and Total Zone put Hawks a few runs below average, enough to knock his WARP into the red given that his production with the bat was light for his position — spent only a short time in the majors and wound up achieving more glory or at least living more comfortably back in the minors. Ox Eckhardt (.192 in 24 major league games, .367 with 2,773 hits in 1,926 minor league games) and Buzz Arlett (.313/.387/.538 in one solid season with the 1931 Phillies, 2,724 hits and a .341 batting average in 2,390 minor league games) come to mind. Arlett was a teammate of Hawks and a fellow rookie with the Oaks in 1918; Bill James would later write that he was as good as marginal Hall of Fame outfielders such as Chuck Klein, Hack Wilson Heinie Manush. Anyway, there's not much additional information easily gleaned from the web when it comes to Hawks, other than the fact that he died in 1973.

So a day late and a dollar short, that's one interesting note about February 3 in Yankee history. Of bigger consequence is that February 3, 1998 marked the promotion of Brian Cashman to the general manager position, but even that anniversary is now trumped by the news of Andy Pettitte's retirement, though one supposes that future baseball historians will mark today's festivities, press conference and all, as the actual one.

About Pettitte, I've got the lead piece on today's Baseball Prospectus, repeating some of what I said here about Pettite's Hall of Fame case, and incorporating comparisons to Tom Glavine and several of Pettitte's pinstriped teammates. Glavine's JAWS score tops Pettitte's as well as the Hall of Fame standard for starting pitchers, not only because he pitched 44 percent more innings than Pettitte but also because of the wide disparity between the two pitchers when it came to balls in play. Glavine's BABIP was .285, while Pettitte's was .312, the highest among pitchers with at least 3,000 innings since 1977, and it's an outlier; 12 points separate Pettitte from the next-highest pitcher, Chuck Finley:

Glavine winds up in the middle of the pack, Pettitte dead last, and an outlier to boot. Some of that had to do with their respective leagues and time frames; the weighted average for the NL during Glavine's career was .294, while for Pettitte (who spent 13 years in the AL, three in the NL) it was .300. Those figures don't correct for ballpark or the quality of the defenders behind each pitcher, but we've got a tool for that, Delta-H, which can be found on the Davenport Translation cards (which are undergoing a facelift and haven't been unveiled yet, but if you know how to look...). Glavine had a delta on hits allowed of -54, meaning that based on the rate of his team's conversion of balls in play into outs over the course of his career, he still came out with 54 fewer hits allowed than you'd expect. By that same token, Pettitte allowed 149 hits more than you'd expect given his teams' BABIP rates. Thank you, Derek Jeter.

While subject to environmental factors as well as the two pitchers' styles, since Pettitte got ground balls a bit more often than Glavine, those BABIPs aren't just flukes that can be waved off at the level of innings we're dealing with. A better supported Pettitte would have saved himself a considerable number of hits and runs, trimming that ERA and likely adding some wins (and even innings) to his ledger, but Pettitte didn't quite have the stuff to dominate. He was a Clydesdale, not a Thoroughbred, and to paraphrase Billy Martin, no matter how much you beat that Clydesdale, he's not going to turn into a Thoroughbred when it comes to the Hall of Fame.

...Clydesdale though he may have been, Pettitte was an exemplar of his breed, and ultimately worth every heart-in-throat moment he provided. On a sweltering hot July afternoon, without his best stuff he might look like Granny Gooden, navigating a lineup with all the grace of an elderly woman on an icy staircase. On a frigid October night, with the brim of his cap pulled low and a season on the line, he was the coolest of customers. Over his last 17 post-season starts, from the 2003 postseason onward, he went 9-3 with a 2.93 ERA and 13 quality starts, with two of those losses coming in shutouts.

I'm sure there's plenty more to be said about Pettitte, but I'll clear the stage and let someone else take the mic.