Over at SI.com I take a look at the Yankees' 2011 rotation in the wake of Andy Pettitte's retirement. There's nothing particularly new there to regular Pinstriped Bible readers, but it puts it all in one place. To my mind, this is the key paragraph:

Most likely, the Yankees will scuffle along with their various patchwork solutions, then make a big splash trade for a starter mid-season. If so, the question becomes which, if any, of their top prospects -- specifically the three killer Bs mentioned above and slugging catcher Jesus Montero -- they'd be willing to part with in such a trade. The Yankees had agreed to trade Montero, considered one of the top hitting prospects in baseball, for Cliff Lee last year before Mariners GM Jack Zduriencik backed out and sent Lee to the Rangers for a package built around first-base prospect Justin Smoak instead. Lee might well have pitched the Yankees to another title, but if not, and if he had turned around and signed with the Phillies in the offseason, as he did, that trade could have proven disastrous. It will be interesting to see if that made Cashman and company any more reluctant to deal their top prospects for a short-term fix, which they have been thus far this offseason.

Meanwhile, with the Yankees still refusing to budge on Joba Chamberlain, it now seems that what could make or break the Yankees' season is the performance of these two men: 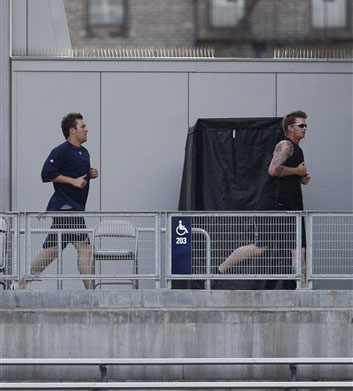 I'm cautiously optimistic about Hughes, who should improve for the simple reason that that's what talented young starters do once they get a full season in a major league rotation under their belts. Burnett pitched in some bad luck last year (.323 opponents' average on balls in play) and seems a good bet to bounce back at least to some degree from what was a career-worst campaign, but then the drop in his strikeout rate, from 8.5 K/9 in 2009 to 7.0 K/9 last year, his lowest mark since 2001, stands out as a red flag from a notoriously unreliable pitcher heading into his age-34 season. There's a lot of pressure on these two heading into the season, as well as on new pitching coach Larry Rothschild, for whom these two--one a major team-controlled asset, the other owed another $49.5 million over the next three seasons--will be among his top priorities. That work will start soon, if it hasn't already. Pitchers and catchers report a week from Monday.

Update: Good stuff here from YES.com's Jon Lane reporting from Pettitte's press conference, including Cashman's admission that the rotation is "incomplete," and Pettitte's thoughts on Burnett.