It's Over: Andy Pettitte Retires

Share All sharing options for: It's Over: Andy Pettitte Retires 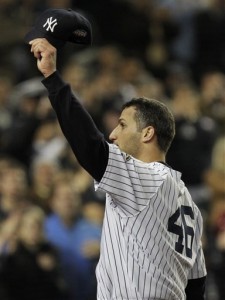 It shouldn't surprise anyone, but the word coming over the wire is that Andy Pettitte has decided to retire. YESman Michael Kay had the scoop, but I think we've all known since that shot of him, moist eyed, in the dugout during the late innings of the Yankees' final loss to the Rangers in the ALCS, knowing he wouldn't get another shot to put the team on his broad shoulders and lift them into another World Series. Pettitte is traveling to New York to meet with team officials and will host a press conference at 10:30 AM on Friday at Yankee Stadium to officially announce his retirement.

Here at Pinstriped Bible, we've spent the entire winter discussing the ramifications of Pettitte's potential departure, so there's no need to rehash it all again this minute, though as fate would have it, we've got a fresh batch of links in the form of my piece today (at ESPN Insider and Baseball Prospectus) devoted to the moves that the five AL East teams should have made this winter; I argue that the Yanks should have grabbed groundballer Jake Westbrook, who quickly returned to the Cardinals. Elsewhere at BP, Steve has a piece on the slim chances of mid-30s renaissances for Freddy Garcia and Bartolo Colon, who aren't likely to fill Pettitte's shoes.

As for the question of whether Pettitte's worthy of Cooperstown, well, I've been there and done that one recently. His gaudy 240-138 record is buoyed by outstanding run support (5.5 per game), his 3.88 ERA would be the highest of any pitcher, and while his 117 ERA+ is comparable to the just-elected Bert Blyleven's 118 — Blyleven being the first non-300 game winner elected in 20 years – the latter had 63 percent more innings and 64 percent more strikeouts. He's low in terms of All-Star appearances (three), never won a Cy Young, and comes up way short on the JAWS scale, with 58.1 career WARP, 30.8 Peak WARP, and a 44.5 JAWS, compared to 70.8, 47.7 and 59.2 for the average Hall starter.

As I wrote the day after what turned out to be his final start, up against Cliff Lee in the ALCS, Pettitte's best claim on Cooperstown is his October resume:

His case rests primarily on the willingness of the voters to grant him an enormous amount of credit for his postseason work. Reaching the three-tiered playoffs 13 times in his 16-year career has given him an inordinate number of opportunities that weren’t available to the players who preceded him, and he’s made enough hay with them to hold a suite of postseason record for pitchers via a 19-10 won-loss record, 42 starts and 263 innings en route to eight trips to the World Series and five rings won. At the same time, his 3.83 October ERA isn’t exactly Gibsonesque, and he’s taken his share of lumps, totaling seven disaster starts (more runs allowed than innings pitched), none more devastating than his 2001 Game Six World Series debacle, where everybody outside the Yankees dugout figured out he was tipping his pitches, and the Diamondbacks pummeled him for six runs in two-plus innings to force the fateful Game Seven.

To that bulky but decidedly mixed bag, one must add the questions about how Hall of Fame voters will look upon admitted PED users. Pettitte's managed to skate where others have been tarred and feathered, but if precedent is any guide, one must conclude that he's got an uphill battle ahead of him for Cooperstown.

But I'm not here to bury Andy Pettitte, I'm here to praise him. I've followed the Yankees closely for 15 seasons, starting in mid-1996, when I was new to New York City. Over that time, either in person or on television, there's no pitcher whom I've seen throw more innings, or for whom I've cheered, whooped and pumped my fist more often, or felt my heart beating in my throat because of more frequently, or come away feeling as though I'd watched a man leave every last ounce of effort out there on the mound — for himself, his teammates and his fans — any more than ol' number 46.

Thanks, Andy. We'll miss you.