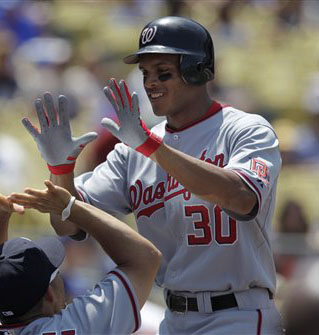 The Yankees made a slight upgrade to their fifth-outfielder situation on Wednesday when they acquired Justin Maxwell from the Nationals for Adam Olbrychowski, a 24-year-old, right-handed reliever who spent most of the 2010 season with High-A Tampa. Maxwell replaces Jordan Parraz on the 40-man roster, the former Royals farmhand who was claimed off waivers from the Red Sox in December was designated for assignment, and arrives as a superior version of Greg Golson, the team's incumbent fifth outfielder from last season.

Here's what I wrote about Parraz in December:

Parraz is a 26-year-old right fielder with limited power who has put up impressive on-base numbers in the minors thanks largely to the number of times he has been hit by a pitch. Parraz has been plunked 60 times in the last four seasons with a career-high of 19 in his first full season at Triple-A in 2010. A very athletic player with a fantastic throwing arm, Parraz is loosely comparable to Greg Golson as a player with more talent than on-field value. The differences being that Parraz is a year older and can’t play center but has a far better walk-to-strikeout ratio. Indeed, assuming the Yankees add a veteran bench outfielder between now and Opening Day, Parraz should be Golson’s primary competition as the organization’s right-handed fifth outfielder option.

Maxwell is also an athletic right-handed hitter, and 27 to Parraz's 26, but while Parraz is a right fielder who has yet to make his major league debut, Maxwell is a center fielder with 260 major league plate appearances under his belt in 122 major league games dating back to 2007.

Maxwell also has more legitimate on-base skills. Though his inability to hit for average undermines the end result, Maxwell has averaged 8.9 plate appearance per unintentional walk in the minors and has walked unintentionally once every 7.2 plate appearances in the majors. To put those numbers in context, a walk every 8 PA would result in 75 free passes over 600 plate appearances. Put another way, Maxwell's on-base percentage is typically 100 points above his batting average, which keeps him from killing his team even when he hits .144, as he did in 131 major league at-bats last year (yet still reached base more than 30 percent of the time).

That's important, because hitting for average has been one of Maxwell's primary shortcomings. He's just a .261 hitter in the minors and hit just .252 in his first 129 major league at-bats before cratering last year. His other big bugaboo has been health. Already bearing a reputation as for being injury prone, Maxwell broke his right wrist making a diving catch in May 2008 and missed the remainder of that season, and he joins the Yankees coming off October Tommy John surgery on his left (non-throwing) arm, another injury resulting from a diving play in the outfield. Fortunately, Maxwell reports that he's already back at full strength and participating in full workouts.

Parraz was an alternative to Golson as a fifth-outfielder option due to his inability to play center. Maxwell is more of a straight upgrade. Both Maxwell and Golson, 25, are athletic players who can field, throw, run, and hit for power, but Golson shares Maxwell's inability to hit for average (.263 on his minor league career) without a modicum of his on-base skills (18.6 UIBB/PA career and a similar rate at Triple-A Scranton last year) and only a fraction of his exposure to major league hitting (30 plate appearances, 23 of them coming with the Yankees last year). That all makes Maxwell a nice little upgrade worth the minimal cost of an unexceptional right-handed reliever from the low minors. It doesn't guarantee him a roster spot out of camp, however, as the Yankees may opt to take a second infielder rather than a fourth outfielder with Brett Gardner more than capable of covering center and Andruw Jones still an asset in the corners.