This Bleak Day In Yankee History

Share All sharing options for: This Bleak Day In Yankee History

February 2 is not a great day in Yankee history. The Yanks obviously don't have any big anniversaries of no-hitters or milestone home runs to celebrate, Yankee players being no more adept to frolicking in the slush and snow than any other major leaguers. And when you crack open the history books, there are uncomfortable reminders of the team's fallibility. 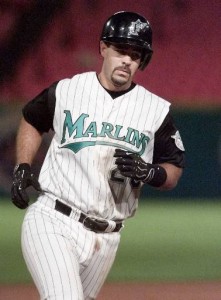 Mike Lowell was a fish who got away 12 years ago today. (AP)

For starters, this is the anniversary of the Mike Lowell trade, which still rates as one of the biggest blunders of Brian Cashman's tenure. The Yankees were just coming off their fantastic 114-win 1998 season, which they'd capped with a World Series sweep of the Padres. Incumbent third baseman Scott Brosius, who'd come to the Yankees from the A's during the previous offseason as the player to be named later in a deal that got Kenny Rogers the hell out of everyone's face, had rebounded from a miserable .203/.259/.317 line in Oakland to a .300/.371/.472 mark in the Bronx, accompanied by 19 homers and 98 RBI (the vast majority while batting eighth or ninth). He'd iced that cake with a World Series MVP trophy for his 8-for-17, two-homer performance with the Padres.

Overwhelmed by good vibrations, young Cashman gave the 32-year-old Brosius a three year, $15.75 million deal to remain in pinstripes. The move didn't work out so well in that Scotty B would hit a combined .254/.316/.411, though outstanding glovework — 52 Fielding Runs Above Average according to Baseball Prospectus – would mitigate that, making him worth 8.2 WARP over the life of the deal. That's not a horrible return, but signing blocked Lowell, who'd hit .304/.355/.535 as a 24-year-old prospect at Triple-A Columbus. So on February 2, 1999, the Yankees traded him to the Marlins for three pitchers — Todd Noel, Mark Johnson and Ed Yarnall — who would combine for 44 big league innings, a 6.54 ERA, and a 25/29 K/BB ratio. Of those three, Yarnall was the only one to even appear with the Yankees. Lowell would overcome a bout of testicular cancer to hit .271/.336/.451 in his first three years in the majors, play above-average defense, and be worth 9.8 WARP in that span; his next three years, when he was still under club control, he compiled 15.9 WARP and helped the Marlins beat the Yanks in the 2003 World Series. Good times.

Beyond that, there are several Yankee-related birthdays to celebrate, but they seem to belong to guys with dubious spots in pinstriped history. Here's Red Schoendienst (b. 1923), a Hall of Fame second baseman who never played for the Yankees but helped beat them in the 1957 World Series as a member of the Braves. Here's George Halas (b. 1895), who went 2-for-22 in a 12-game stint as an right fielder in 1919, spread out over two months. The MVP of the 1919 Rose Bowl hurt his hip and decided he had better things to do, like help found the National Football League.

Oh, hey, here's Scott Erickson (b. 1968), who after compiling a 6.35 ERA and a 139/161 K/BB in 335.2 innings strewn from 2000 to 2005 — a span during which he led the majors in Totally Washed Up — somehow resurfaced with the Yankees and was pounded for 10 earned runs over 11.1 innings in a four-week stretch in May and June. And here's Wes Ferrell (b. 1908), a great pitcher in his day — some have argued for him as a Hall of Famer, and his case is an interesting one; his brother Rick, a catcher, was more or less accidentally admitted via the Veterans Committee in what one can only assume was a case of mistaken identity — but one who was totally washed up by the time he reached the Yankees at age 30. He put up a 6.75 ERA in 49.1 innings in late 1938 and early 1939, and had just 18 similarly lousy major league innings left in the tank at that point.

And if you really want to torture yourself about dark moments in Yankee history, here's Dale Murray (b. 1950), a workhorse but otherwise nondescript righty middle reliever whom the Yankees traded for after a superficially strong 1982 with the Blue Jays (3.16 ERA, 111 innings, 11 saves, but just 4.9 K/9). He gave the Yanks 120 innings with a 4.73 ERA over two seasons and change, but only after the team sent minor leaguer Fred McGriff, Dave Collins, Mike Morgan and $400,000 to Toronto — an all-time, you-gotta-be-kidding-me howler of a trade. The Crime Dog, who had been drafted the year before and was thus years away from making an impact in the majors, would go on to hit 493 homers and make five All-Star teams, and while he eventually would have crossed paths with Don Mattingly on the Yankees' depth chart, he almost certainly would have been valuable enough to fetch something greater in trade. Sandwiched between Murray's two lousy seasons was his free agency; the Yankees re-signed the journeyman for a cool $350,000 after the 1983 season, only to lose him for three months in 1984 due to a sciatic nerve problem. They were on the hook for another $625,000 when they released him the following April, the day after Yogi Berra was axed for having the temerity to start the season 6-10; Murray had pitched two big league innings for the Yankees that season and would pitch just one more for the Rangers before splitting the scene.

There are at least a couple positives to report. On this date in 1936, the Baseball Writers Association for America announced that Babe Ruth would be among the five players in the inaugural class of the National Baseball Hall of Fame, joining Ty Cobb, Walter Johnson, Christy Mathewson and Honus Wagner. And on this date in 1989, Yankee broadcaster Bill White was named president of the National League, making him the first African-American to hold a high executive position in U.S. professional sports.

So there's that, along with the birthday of friend and loyal reader Nick Stone, a lifelong Yankee fan who has been my most frequent foil in barstool-based baseball arguments going back well over a decade, and a sounding board for many an article idea or witty quip. Don't blame him for this column, though.

All in all, it's a day that if you poked your head above ground to witness, you'd just as soon duck back into your hole and wait for a better one, shadow or no.