No Squatter's Rights for Posada

Share All sharing options for: No Squatter's Rights for Posada 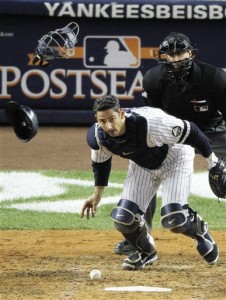 The Yankees have made it clear they don't plan to let Jorge Posada spend much time behind the plate in 2011. (AP)

Among Monday's news items from Yankeeland was a note regarding Jorge Posada coming around to the idea that he'll be serving as the Yankees' designated hitter far more often than he'll be catching in 2011. Sort of, at least, in that Posada still sounds confident that he'll see at least some time behind the plate, even given the fact that the team now has two experienced (if flawed) catchers in Russell Martin and Francisco Cervelli on its roster, not to mention two well-regarded prospects, Jesus Montero and Austin Romine, who spent 2010 at the upper levels of the team's minor league system and who are nearly ready for the majors:

"I'll catch, I'll catch. I'll catch this year. You know, I'll DH and then they're going to want me to catch one of those days," Posada said during an appearance at the Hillside Food Outreach benefit, hosted by Bernie Williams. "... I'm keeping open minded; I would love to catch. I'm training like I always do. And if I have to catch, I'll catch."

...[Yankees general manager Brian] Cashman said earlier this week that Posada would only catch in emergency situations. The fiery veteran said on Saturday that he didn't question Cashman's decision back in November.

"I can't complain. I like to catch, I always like to catch," he said. "I'm used to catching but if they want me to be a DH to help out the team, you have to do that."

At the very least, Posada sounds like he's moved beyond November's controversy, reaching the acceptance stage along the Kübler-Ross spectrum as he's faced his migration along the defensive spectrum. And not a moment too soon.

Lost in the conversation is the fact that players who combine the ability to switch between catcher and DH with some regularity are fairly rare, primarily because such an ability means moving from one of the smallest, most specialized talent pools to one of the largest. Catching is a difficult position requiring specialized abilities which only a relatively minimal number of players can handle at a major league level, whereas the pool of potential designated hitters consists of anyone who can swing a bat. From a practical standpoint, the lightest hitters aren't likely to be included in the DH pool because managers have better options; absent a full-time DH, your average fourth outfielder or backup corner infielder is a more productive hitter than your backup catcher.

Furthermore, even in the days of 12-man pitching staffs, teams generally have the depth to cover for an infielder or outfielder taking a turn at DH, but most managers are loathe to use a catcher in such a role except in an emergency because it requires carrying a third player capable of catching. Last year, that meant the Yankees carried Chad Moeller for a month when Posada returned from his broken foot in late May and spent the first half of June almost exclusively at DH. Moeller got into just four games in that timespan, a waste of a roster spot.

Such a problem helps explain why in the 38 seasons since the designated hitter was introduced in 1973, only 41 players have had at least one season where they caught at least 15 games and DHed in at least 15 games, criteria Posada met in both 2008 and 2010, so perhaps we should credit Cashman and Joe Girardi for being relatively open-minded about the topic in the first place. The 41 players in question met both criteria a total of 76 times, an average of two per year since the DH rule went into effect. Raise the bar to 20 and 20, and the list drops to 47 such seasons by 31 players; at 25 and 25, it's 23 seasons by 18 players, with Posada v. 2010 among them.

What quickly becomes apparent once you look such lists is that most of the players who did such a dance were younger players; the median age from those 76 player-seasons was 29 years old, the average (weighted by plate appearance) was 29.7. Only 17 of those 76 seasons came from players who were 34 or older, and just 10 of them got enough playing time to reach 300 plate appearances. As you might guess, most of those 10 were pretty good with the stick, because otherwise, why bother?

A couple names familiar to Yankee fans top the list. Stanley spent 1992 through 1995 with the Yankees, and returned in late 1997 via a trade with the Red Sox after Cecil Fielder was lost to an injury; his split season is represented above. Leyritz played for the Yankees from 1990 through 1996 and again in late 1999 and early 2000; he split 1998 between the Red Sox and Padres. He also fell seven PA short of making the list with a 128 OPS+ in strike-torn 1994, and made a solid showing (119 OPS+) in 167 PA in 1992. Posada, who played 60 games with the Yankees in 1997 while spending the entire year in the majors, more or less chased both out of the organization.

Right off the bat, we can say that if Posada were to catch 15 and DH at least 15 games apiece, make 300 plate appearances AND finish with an OPS+ above 100, he would be the oldest player ever to do so, not to mention the first player to do so twice from age 34 onwards. That doesn't sound like it's asking a whole lot, and perhaps even the Yankees would bet the under when it comes to Posada's donning the tools of ignorance, but simply the fact that such a role at that level of productivity is virtually unprecedented should give pause.

Then again, Posada's production last year is in short list territory as well. Since the dawn of the DH era, there have been just 23 player-seasons where a player 35 or older has caught at least 80 games and hit at a 100 OPS+ clip. Here's the leaderboard:

All of which is a roundabout way of saying that the Yankees have been fortunate to get as much as they have out of late-model Posada, and they'll be luckier still to do so as they move him into a fairly unique role. Enjoy him while you've got him.