Keeping Up With the Joneses

Share All sharing options for: Keeping Up With the Joneses 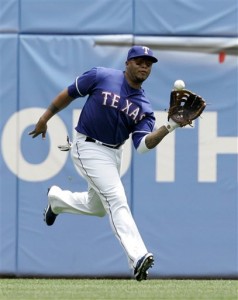 Andruw Jones is still a good enough flychaser to help the Yankees on both sides of the ball. (AP)

Word just came down that the Yankees have closed the deal with Andruw Jones to be their fourth outfielder. According to SI.com's Jon Heyman, the one-year deal calls for a $2 million base salary with another $1.2 million worth of performance incentives. While that base is four times what the soon-to-be-34-year-old Jones commanded last year with the White Sox, it's still quite reasonable. As I detailed before, Jones is a good fit for the Yankees' bench given his ability to hit lefties and play all three outfield positions at an above-average clip.

Jones will more or less fill the role vacated by Marcus Thames, who on the same day finalized a deal with the Dodgers calling for $1 million in base salary and another $800,000 in potential incentives based upon plate appearances and innings in the field. Thames, who probably carries around a leather wallet stamped with the words "Lefty Masher," hit .300/.352/.454 in 142 plate appearances against southpaws in 2010, and has hit .274/.333/.516 in 492 PA against them over the last four years. Over the same time period, Jones has hit a much weaker .222/.347/.435 in 556 PA against southpaws, and his line against northpaws (.207/.292/.400) isn't as good as Thames' (.243/.297/.493) either over that timespan, so on one level this would seem to be a downgrade for a team that has two outfielders — Brett Gardner and Curtis Granderson — who are vulnerable to lefties.

The difference is defense. Jones can still spot in center field; he played 17 games there in 2010, though none in 2009. He was four runs above average overall according to FRAA, and is 16 runs above average during his four-year decline phase. Thames made just 33 appearances in the field for the Yankees last year and was only one run below average, but that's in part because Joe Girardi was diligent about replacing him for defensive purposes; for the most part, he couldn't catch a cold. Baseball Prospectus' adjusted games stat, which accounts for actual innings, credits Thames for 19.2 games in the field, compared to Jones' 69.8. UZR and DRS both peg Thames at four runs below average overall in his limited 2010 duty, compared to one to four runs above average for Jones.

The bottom line is that thanks to defense, Jones was twice as valuable as Thames in 2010 (2.1 WARP to 1.1) and the advantage is even bigger (2.8 to 1.1) over the past two years, to say nothing of even longer time horizons. He's not the player he was during his heyday with the Braves, but he's a better complement to the Yankees' bench than Thames was, and while the stakes are relatively low, this rates as one of their best moves of the winter.