Soriano Strengthens the Pen, But Do Dominoes Fall? (Updated)

Share All sharing options for: Soriano Strengthens the Pen, But Do Dominoes Fall? (Updated)

Sports Illustrated’s Jon Heyman has tweeted (everything happens by tweet nowadays; if Congress ever declares war again, you know where to look for it) that the Yankees are "thought to" have signed reliever Rafael Soriano to a three-year, $35 million contract. Nothing is official until it’s official, as Yogi Berra used to say, but for the moment there is no reason to doubt Mr. Heyman.

Assuming, then, that Soriano is in the fold, what have the Yankees done? Let’s hit the positives first. Soriano is a 31-year-old right-handed reliever with a career 2.73 ERA. He was all but unhittable last year, allowing just 5.2 hits per nine inning pitched. Over the course of his career, right-handed hitters have batted a sub-anorexic .163/.226/.281 against him. If you’re going to spend money on a reliever, this is the kind of guy you want rather than , say, someone like Evan Meek who had a good year last year and maybe he’ll have one again and maybe he won’t. This guy put all the Es in Effective.

Having said that, there are some risks here. Perhaps the most visible one, so visible that even Brian Cashman had talked about it prior to the deal, is that the Yankees have now traded out of the first round of a draft that is supposed to be burgeoning with talent, handing their first-round pick to the division-rival Rays. Still, we shouldn’t overrate the draft issue: the Yankees were due to pick 31st in the round, and as good as the class is, were they going to get a player as good as Soriano all the way down there? Probably not. And again, Soriano is a very good reliever. If you’re going to blow a top pick on a player, it had better be a top player, and Soriano is clearly an excellent pitcher.

Now, the Yankees have bought very high on a guy who had a .199 batting average on balls in play last year—Soriano has always done well in that regard, but he hasn’t sustained an average that low, and he won’t. His strikeout rate was also his lowest since his rookie year, but he also had excellent control, so between the efficiency, the problems batters had making solid contact, and some good luck, he was very difficult to hit. When a pitcher has this interplay of factors, great things happen, but it’s a bit like hitting three bars on the slot machine—you don’t count on it on coming up on every pull. Soriano also has a checkered injury history, and there is a better-than-average chance that somewhere in the course of his deal the Yankees will pay him to soak up the post-surgical sun. Still, the worst-case scenario is that they have a very qualified eighth-inning pitcher who can close on the off chance that Mariano Rivera needs to rest/is injured/suddenly pitches his age.

What makes the move a bit perplexing is that it doesn’t necessarily address a glaring area of weakness. The Yankees had good bullpen resources and a lot of additional options for the pen in whichever of their many starting prospects they choose to demote from the rotation and groom for middle relief. Additionally, if the plan is to counter the apparent thinness of the starting rotation by somehow stacking the bullpen, that could work—I’m thinking of teams like the 1990 championship Reds—but clubs that get away with five mediocre innings from the starters and four shutout innings from the pen seem like outliers, even given the evolving dominance of bullpens over the last 20 or 30 years. As Soriano is, he’s only going to give you somewhere between 60 and 75 innings, and as bad as some of the incumbent relievers looked in the 2010 postseason, and as good as Soriano might make those innings, it’s not clear that the total, especially when yoked to a tenderly-used Rivera, will be enough for the Yankees to skate by.

Again, this isn’t a bad move—that Soriano can opt out after one year could someday make that forfeited draft choice haunt the Yankees, because then you would be balancing six years of team control of a prospect (if the Yankees drafted wisely) versus just one year of the reliever. Putting that aside, though, as with all moves, the Soriano signing must be viewed in the context of the team as a whole. For this addition to go from being a good one to a great one, another shoe has to drop. 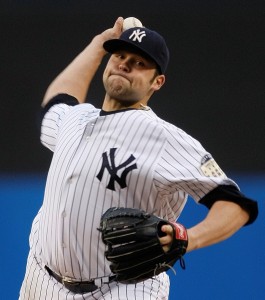 Joba Chamberlain: Soriano signs, so back to the future? (AP)

That shoe should belong to Joba Chamberlain. While there’s nothing wrong with having a spectacularly deep bullpen, the Yankees have better things to do in the seventh inning than waste Joba there—they can mix and match with Dave Robertson and Pedro Feliciano. Given the deficits in the team’s rotation, Chamberlain has to get another chance to start. It’s just logical: who is a better candidate for the fourth spot in the rotation—Jeff Francis? Sergio Mitre? Jeremy Bonderman? Justin Duchscherer? Or Joba Chamberlain?

If Joba isn’t going to be given a chance to win a rotation spot, then the Soriano signing completes his journey from top starting pitching prospect to ace reliever to setup reliever to generic middle reliever. That is a depressing devolution to witness and a true waste of talent. Maybe it was inevitable, but it sure doesn’t seem that way, and it’s not too late: if the Yankees don’t want to trust two kids in the rotation (Ivan Nova and someone else) and don’t want to gamble on a scrapheap pickup, then put Chamberlain in the rotation and let David Phelps or Adam Warren cut his teeth in the low-leverage role that Joba seems slotted for now. If that’s the case, they can address the team’s real weakness, it’s starting rotation, rather than gilding an already-strong pen.