The Pinstriped Hall of Not Quite, Part II

Share All sharing options for: The Pinstriped Hall of Not Quite, Part II 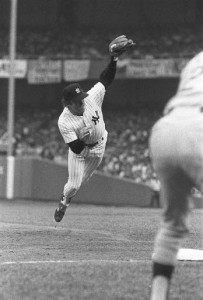 Graig Nettles' acrobatic play in the 1978 World Series, particularly in Game Three, helped the Yankees surmount a 2-0 deficit against the Dodgers (AP).

Picking up from where I left off a couple of days ago, with an all-star team of sorts focused on the best ex-Yankees who aren’t in the Hall of Fame using my JAWS tool.

To re-state the boilerplate in case you're new to this... the Jaffe WARP System was created with the stated goal of defining and raising the standards of the Hall of Fame after decades of haphazard selections. JAWS is a tool to evaluate candidates by comparing them to the already-enshrined players at their positions on the basis of career and peak performance (defined as a player’s best seven seasons). Both career and peak are measured in Wins Above Replacement Player (WARP), which values each player’s hitting, pitching, and fielding contributions relative to those of a freely available reserve or minor league call-up in runs, and converts those runs into the currency of wins. JAWS averages the career and peak figures; effectively, a player’s best seasons are double-counted because they have a demonstrably nonlinear effect of improving his teams’ chances of winning championships. JAWS doesn’t take into account awards, postseason performance or other more subjective criteria, all of which can shade a player’s case one way or the other but can’t overcome major shortcomings in the meat-and-taters department of regular season performance. For more, please see here.

The position standards themselves, the average scores of the already-enshrined players at each position, with the lowest scores — almost invariably underqualified Veterans Committee selections — dropped:

At each position, I'm making either one or two selections, the first based upon players who spent any amount of time with the Yankees (particularly those who passed through at the start or end of their careers), and the other based upon those who spent at least three years with the team; if the latter is higher, we'll skip the former. Active players will not be part of this discussion.

Picking up with the balance of the infield...

Randolph didn't have a Hall of Fame-caliber career, though he was a very good player for a very long time thanks to his outstanding on-base skills and above-average defense. He sports a .373 lifetime OBP, with four bating-title-qualified seasons above .390, and only three below .340, only one of them with enough plate appearances to qualify. He had six league top ten finishes in the category spread out over 14 seasons (1978-1991), and eight top ten finishes in walks as well, including a league-leading 119 for the Yankees in 1980. He had good speed and stole 20 bases per 162 games at a 74 percent clip, a bit above the break-even point. The only thing he lacked offensively was pop; he totaled just 54 homers in his career, and slugged a fairly light .351. Glovewise, he was 111 runs above average over the course of his career, about six per 100 games, which is a very healthy showing. He never won a Gold Glove, but those things are won on reputation; Bobby Grich, Frank White and Lou Whitaker — all outstanding defenders in their own right — combined to win 15 straight in the AL from 1973 through 1987, freezing Willie out.

At his best, Randolph was worth a bit over 5.0 WARP per year; he never topped 6.0 WARP, but he reached 5.0 four times in his first five seasons as a Yankee (1976-1980), and three more times after that, two for the Yanks (1985 and 1987), and then in his second-to-last season, as a Brewer (1991). That's a damn fine player, and it's no wonder he played on so many playoff teams (six, though he missed the 1978 postseason with injury) and had a healthy number of All-Star appearances (six). He's well off the JAWS standard for second basemen, and he received just 1.1 percent of the vote in his lone ballot appearance, but he was certainly a championship-caliber building block.

Fernandez was an excellent two-way shortstop who spent about two-thirds of his 17-year career with the Blue Jays, who signed him out of the Dominican Republic in 1979, relatively early in terms of the booming impact that tiny country would have on the game from the Eighties onward. He was arguably the island's first great major league shortstop, and still ranks as its best according to JAWS; Miguel Tejada (51.7/38.1/44.9) no longer appears to be a threat to catch him. He played a pivotal role in the Blue Jays' ascent to respectability in the mid-Eighties, and averaged a strong 6.0 WARP for them from 1985 through 1990, before being traded to San Diego along with Fred McGriff for Roberto Alomar and Joe Carter in 1990, and missed out on the Jays' first World Series win (1992) but not their second (1993). He bounced around thereafter, with consecutive one-year stands with the Mets, Reds and Yankees, with whom he reached the playoffs despite a subpar year (.245/.322/.346, 1.1 WARP). He's perhaps more famous in Yankee lore for fracturing his elbow in spring training in 1996 and missing the entire season, paving the way for a rookie shortstop named Derek Jeter to make the team. The rest is history.

After Jeter and Hall of Famer Phil Rizzuto, the next most valuable shortstop to spend a substantial period of time as a Yankee is Roger Peckinpaugh, who manned the position from 1914 to 1921 in between stints with the Indians and the Senators over the course of his 17-year career. He wasn't a particularly strong hitter overall (.259/.336/.335 lifetime), but he had three strong years at the end of his term with the Yankees (.286/.375/.395 combined) after hitting just .241/.311/.314 through his first five seasons with them. He was more or less an average defender, so he wasn't all that valuable overall; he cracked 3.0 WARP just three times, in 1916 (3.6) and 1919 (6.4) with the Yankees, and 1924 (6.4) with the Senators. The 1921 Yanks won the first pennant in franchise history, but Peckinpaugh wasn't around to partake in the ensuing dynasty, as he was traded to the Red Sox in a six-player megadeal involving successor Everett Scott, then flipped to the Senators a few weeks later. He proceeded to help Washington to their first two pennants in 1924 and 1925 at the ages of 33 and 34, winning MVP honors in the latter year for numbers that don't look all that MVP-like (.294/.367/.379, four homers, 1.3 WARP due to below-average defense). He must have led the league in intangibles.

Robin Ventura reached the majors with the White Sox, having compiled one of the greatest careers in college baseball history at Oklahoma State, highlighted by a record 58-game hitting streak and the 1988 Golden Spikes Award. An outstanding defender and a patient hitter with plenty of pop, he enjoyed some very valuable years on the South Side, averaging 4.5 WARP per year across nine seasons, with monster years in 1992 (7.5 WARP) and 1993 (8.6) when he was a combined 53 runs above average with the glove while hitting .272/.377/.432. The White Sox reached the playoffs in the latter year. He had another huge year (7.8 WARP) after signing with the Mets in 1999, helping them reach the playoffs and collecting a hit that should have made my recent list, the Grand Slam Single, a bases-loaded home run that ended a 15-inning white-knuckle affair with the Braves, but which turned into a single after Ventura was mobbed by his teammates after rounding first base with the winning run having scored. Ventura was an ace (sorry) when it came to bases loaded situations; his 18 career grand slams are tied with Willie McCovey for fifth on the all-time list, with only Lou Gehrig (23), Manny Ramirez and Alex Rodriguez (21 apiece), and Eddie Murray (19) ahead of him. Those giants all hit at least 493 homers while Ventura totaled "only" 294 in his career, so he was disproportionately good at such situations even in the most select company.

By the time Ventura came to the Yanks in 2002 he had been slowed by injuries, but he enjoyed a nice rebound after moving crosstown, hitting .247/.368/.458 with 27 homers and 4.6 WARP in his first year, his best season since 1999. His power fell off the following year and he was traded mid-season to the Dodgers, replaced by one Aaron Boone. While the Yankees reached the World Series, Ventura played out the remaining year and change of his career in L.A. He finished with a JAWS score that was short of the average Hall third baseman but not by much; he was one-and-done on the ballot.

Nettles was the greatest third baseman I've ever seen, having witnessed his late-Seventies heyday and more specifically been crushed by his litany of leaping stops in the 1978 World Series, particularly Game Three (pictured above). Though he didn't hit for high averages, he had plenty of power (390 career home runs) and a decent walk rate to go with defense that stands up to the legend (+122, about 5 runs above average per 100 games); he won two Gold Gloves, having been frozen out by 15-time winner Brooks Robinson early in his career and then Buddy Bell later.

Acquired from the Indians in November 1972 at the age of 28, Nettles joined Thurman Munson and Roy White as the early pillars of the team which would be built into a three-time AL champion (1976-1978) and two-time World Series winner. He averaged 4.8 WARP during his first six seasons in pinstripes and was worth a high of 7.2 in 1976, his most valuable season, when he .254/.327/.475 with a league-leading 32 homers and defense which was 25 runs above average. His career took a decided downturn starting in 1979, at the age of 34, but he hung on all the way until 1988, reaching the World Serries again with the Yankees in 1981 and with the Padres in 1984. The memories of his defensive prowess kept him on the Hall ballot for four years, but he never even broke 10 percent.

Back with the outfield next time around...