Austin Kearns started the scoring in the 4th with a solo home run.

Robbie Cano's grand slam comes from one of the oddest sequences of the season.  Jeter walks.  A rare error by Ichiro allows Jeter and Swisher to take the extra base, and then Luke French opts to walk Mark Teixeira to face the lefty.  Except, this lefty hits lefties just as well has he hits righties, and if veteran egos weren't involved, this lefty would have batted third all season. Cano crushed the first pitch.

I'm generally apposed to the intentional walk, but I believe that a manager should never ask a pitcher to walk the bases loaded and then have to face the next batter; it's too hard to find the strike zone, and the pitcher winds up losing his rhythm or grooving a pitch.

Nick Swisher's work with Dave Eiland is apparently paying off- he made a great throw from RF to cut down Franklin Gutierrez at the plate.  And then, when he moved to first after the game became a laugher, he made a tough pick on a hard hit grounder to end the top of the 8th.

Kerry Wood rose to the occasion in relief, pitching 1.2 IP until a couple bloopers put runners on first and second.  With Wood's pitch count at 26, Joba jogged in and ended the threat.  Joba finished the 9th after allowing a leadoff double.

Play of the Game: This is a happy, no tension Sunday graph: 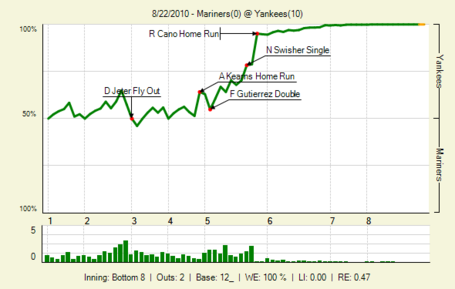 Comment of the Game: This one goes to YankeesNZ1 for his insertion of fact into the community dialogue.  Despite the huge number of double plays the Yankees seem to hit into, they actually have the second fewest GIDP in the AL.  That's especially impressive considering the Yanks have the second highest OBP in MLB (.348 to the Twins' .350).  The Twins lead the league in GIDP.