The Value of a Win.....With Pictures!

Share All sharing options for: The Value of a Win.....With Pictures!

The financial rules for the Yankees are different than for every other team in the game.  We are the biggest of the big market teams and we get to overpay for free agents and swallow bad contracts without too much of a hiccup.  But, with the way the current system is set up (team controlled years for young players) there is a massive disparity in the salaries that young players get.  This is why prospects are so incredibly valuable in today's game of free agency.

Free agency is basically an overpaying auction.  You overpay for an older player, they're worth it for a few years, and then you stomach the bad contract at the end of the deal and often end up making a "salary dump" type trade.  But a failed free agent might cost you $10-$15 million dollars a year, eating away at most teams ability to compete.  A failed prospect costs you $400,000, and you can usually just throw them back into the AAA pond.

Putting out a $200 million team every season makes it a lot easier for the Yankees to field a winner, there's no point in denying it.  For all teams, however, there are budget limits, and a need to cut costs (just ask Johnny Damon and Hideki Matsui).  But how is the money that is put into the team being spent?   And how does that money translate into results on the field?

After the jump is a chart and two pie (yes, pie) graphs answering those questions!

Alright, here's a table of the Yankees 2010 salaries (a few guys who have been up and down are left off, but it's most of them), and also their WAR up until this point in the season: 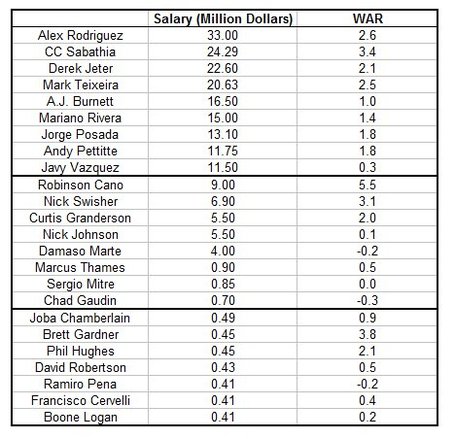 As you can see by the lines, I split the players into three sections, veterans who make over $10MM, veterans who make less than $10MM, and young players still under team control.  Here is the breakdown of how these three groups are paid, and how they have produced: 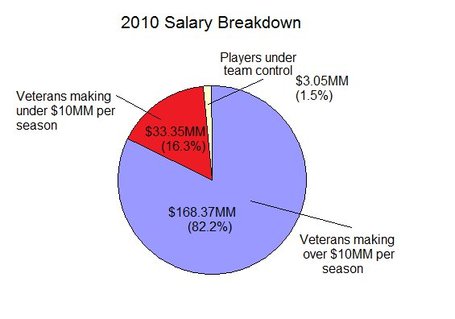 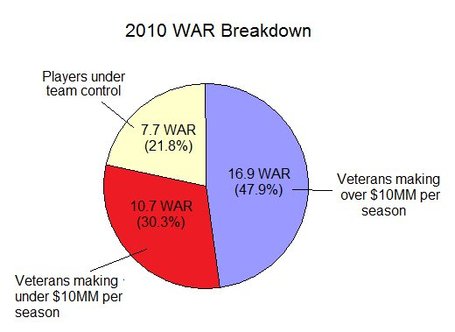 So, as you can see, young players make up an absolutely tiny fraction of the payroll, and yet, contribute over 20% of the production to the team, and that's even with an extremely veteran heavy team like the Yankees.  That's why they're so valuable, that's why you don't trade Jesus Montero for a rental, and that's why prospects are such a big deal.  And, if you hadn't noticed, the Yankees rise to the top has coincided with building back up the farm system instead of flipping every young player for aging veterans.

Your thoughts and comments are welcome.  Oh, and I got my info from the greatest baseball database ever, Fangraphs.

[Please no "WAR IS STOOPID" posts, it has nothing to do with the point of the article. It's just a quick and easy way to compare production]