How did that happen? Yankees come back to win thriller, 7-6

Share All sharing options for: How did that happen? Yankees come back to win thriller, 7-6

The game looked lost down 6-1 to Cliff Lee in the sixth. The Yankees inched back into the game and eventually took the lead in the top of the ninth against Neftali Feliz. Then Mo surrendered a leadoff triple to Elvis Andrus in the bottom half. It appeared to be another blown save, but a great shoe-string by Kearns in rightfield, a groundout to Mo and a groundout to A-Rod ended the nail-biting affair.

Let's start at the beginning.

Javy Vazquez (4.1 ip, 8 h, 6 er, 2 bb, 1 k) really wasn't as bad as his line looks. A walk to Bengie Molina with two runners on and two outs in the fourth was his biggest mistake. He had him down 0-2 and began to nibble. With Molina on first, Mitch Moreland (who?) singled off 1B Lance Berkman's glove (a play Tex probably makes), scoring two.

In the fifth, Vazquez again conceded two runs on one hit with two outs. The fault in that inning really lied with Posada, who fouled up a run-down. For who knows what reason he held onto the ball, watching Nelson Cruz run back to third.

Down 6-1 to The Artist Known as Cliff Lee was intimidating. He looked unstoppable (11 k, 0 bb). Eventually the hitters worked him enough to tire him - did the 99 degree heat have an effect?

What really gave the Yanks a sense of confidence was Berkman's RBI double off Lee in the seventh. Brett Gardner followed with an RBI single that knocked Lee from the game. However, with Berkman on third and one out, down by two, both Jeter and Swisher struck out. It looked to be another excruciating night when no one could get that one big hit.

In the eigth, Marcus Thames homered deep to left off Frank Francisco, who proceeded to strike out A-Rod and walk Cano and Posada. Up came Austin Kearns... GIDP on a 3-1 pitch. Pain. Again, one of those nights.

With the score 6-5 in the top of the ninth, Feliz entered and showed signs of fatigue, perhaps from throwing 21 pitches yesterday: walk, single, wild pitch, single (tie game), strike out. Thames came through again with a go-ahead single, sneaking a bouncer through the left side.

Then there was the bottom of the ninth. Andrus tripled to right-center on the second pitch, putting Texas into a prime position to at least tie the game. Due up were Michael Young, Josh Hamilton and Vlad Guerrero. Quite a scenario. Kearns snared a blooper off his shoe tops, Mo fielded a grounder and A-Rod grabbed a wicked bounce at third to retire Vlad. Game over, panic in Yankee-land averted.

- With Tampa's loss, the Yanks take a 1.5 game lead in the division.

- The Yankees struck out 17 times, tying a franchise record.

Play of the Game: Yet another from the losing side - Elvis' ninth-inning leadoff triple dropped the Yankees' chances of winning 38%. From the winning side it was Jeter's game-tying single in the ninth through a drawn-in infield (+19%).

Comment of the Game: Edgware, for all you need to know when Granderson steps to the plate with RISP. 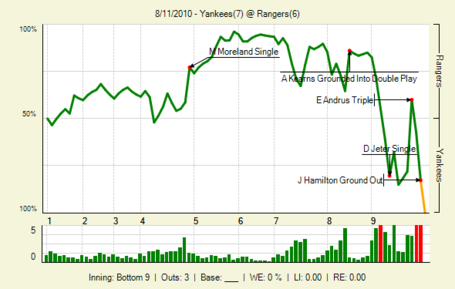