Share All sharing options for: Tampa Yankees Week in Review: Melk-man on fire

Coming off an 0-for-6, four-strikeout fiasco, Melky Mesa broke out on Monday and didn't let up through the week. He's lifted his average 10 points (from .264 to .274) through eight August games, including four-hit outings on Tuesday and Thursday. He homered and singled Monday, driving in three. One of Tuesday's hits was a two-run double, and he doubled again and scored a run Wednesday. His big Thursday featured a three-run homer, two runs scored and a walk-off single in the 11th inning. Mesa doubled, scored a run and stole a base across his last two games of the week.

He still isn't walking much (one walk last week), but that's his game: swing often, swing hard, and hope to make contact. After an 0-4 last night, his OPS dropped to .819. 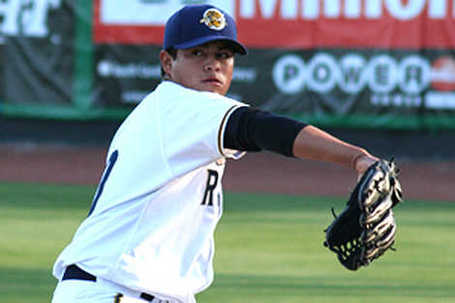 Mesa was the offensive star while the pitchers saw Manny Banuelos (photo) step up with the game of the week on Friday: 6 ip, 4 h, 0 r, 3 bb, 11 k, dropping his ERA to 1.89 (third best on the team). He will probably be the top ranked pitcher in the system this winter. Nothing against Brackman, Betances or Nova, but Manny is only 19 and a lefty - that goes a long way towards projection.

The Yankee farm-hands have played so well with so many players exceeding expectations that they may end up with a top 10 system-ranking this winter. It's been that kind of season on all levels.