First, I'm going to rule out father time.  The main reason I posted Jeter's stats from 2009 was to show how elite his numbers were so recently.  The dude's not just going to fall off a cliff in that short of a time period.  Is he slowing down, and will he have a natural age progression?  Probably (Unless he has Mariano like magical powers), but I'm not going to call him "too old" to play up to 2009 form yet.

Now, to establish that Jeter is hitting a disproportionate number of ground balls.  One of those colorful graphs will be shown post-jump: 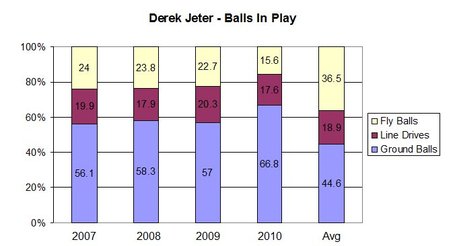 Here are Jeter's breakdown of balls in play for the past 4 years, and Avg is the 2010 average for Yankees batters.  So, while Jeter has always had a tendency to hit ground balls, this year he is doing it at an absolutely huge pace.  But this is just one piece of the puzzle, how do the rest of Jeter's peripherals look?

Per his career numbers, Jeter is walking at a similar rate, striking out at a similar rate, getting infield hits at a similar rate, and has not been victimized by any particular pitch (Jeet's Fangraphs page for ye of little faith).  However, Jeter's plate discipline has been somewhat troubling.  His pitches per plate appearance is at 3.55 this year, down from a career mark of 3.73.  And more troubling still, his out of zone swing percentage is at a career high (28.3% vs. 20% for his career), so Jeter has been expanding the zone considerably more than he usually does.

Swinging at more balls would lead you to believe that Jeter would be swinging and missing more, however, his swinging strike percent is at 6.8, compared to a career mark of 7.9 and a 2009 mark of 6.7.  In addition, his contact percent is at the second highest level of his career, at a very high 85.5%.  So Jeter is seeing fewer pitches, swinging more out of the zone, but he is still putting the ball in play.  Conclusion drawing time:

Derek Jeter is being too impatient at the plate.  The low swinging strike percentage convinces me that he isn't being fooled or having trouble picking up pitches, he's just swinging at too much junk.  And as he is an excellent contact hitter, Jeter is still able to get his bat on said junk.  Unfortunately, when you make contact with junk, the result is a lot of balls put in play weakly.  Ergo, the BABIP drops as the ball is being put in play with less authority, and you see a lot of weak ground balls.

Wait for your pitch, Cap!