The Yankees never held a lead in this one, tying the score in the 2nd, the 6th, and the 7th, until Robbie Cano (donchaknow?) continued his MVP year.  This time it was a class Bases Empty MVP blast, but it was as clutch as any hit all season.

Javy Vazquez was pretty good against one of the best offenses in baseball.  But Carl Crawford is a beast- he drove in a run, laid down one of the best bunts you'll ever see to set up runner on the corner, and he stole a base.

This is one of those games that flew by- tense, well pitched, and supremely important to the fate of the season.

Javy pitched into the 7th, and then Old Man Logan came in looking dominant. 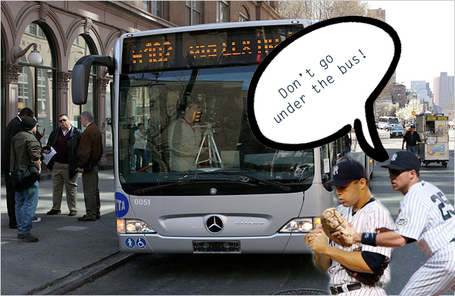 I'm pretty sure I'm not the only one whose noticed that D-Rob hasn't allowed a run since the 4th of July, striking out 15 in 10 innings of work.  Since May 8th, Houdini has pitched to a 2.22 ERA with more than a K per inning.

Tex and Swish did their parts, adding to Grand Central's sac fly to bring in the Bomber's runs.

There was a lot of pressure on Matt Garza following his no-hit performance last time out.  I give him all the credit in the world for pitching a great game; most pitchers drop the next couple of starts after a no-no or perfect game, either from fatigue or mental let down or trying to be too perfect.  This guy is good.

The Yankees' lead is back to 2 games, and tomorrow they go for the series win.

Comment of the Game: There were several good ones, but I love this pic from Kevin L.