Share All sharing options for: Yankees 4, Mariners 2: A-Rod the Destroyer

Mood music - Use Me by Bill Withers

CC Sabathia pitched a gem in the Yankees 4-2 victory over the Mariners, allowing only one hiccup, a 2-run, game tying single by Russel Branyan in the 8th inning.  Conveniently for the Cholesterol Consumer, The Centaur (Alex Rodriguez) delivered a 2 run-game winning home run.

And we had the lead going into the 9th inning, so Mariano Rivera, of course, did his thing (Mo's WHIP has now been lowered to 0.59.  Take a moment to reflect on how absurdly good that is.).

Other than that, the Yankees looked rather feeble on offense, against the less than stellar competition of Ryan Rowland-Smith, squandering several opportunities to make the game considerably more comfortable for the Big Man.  But, hey, a win is a win.

Comment of the game goes to Edgware for his flashing neon "ARDO" sign, and the A-Rod domination that ensued. 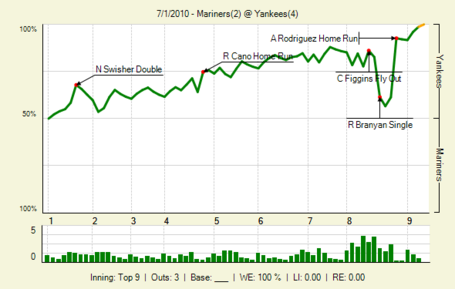 The Blue Jays roll into town for three afternoon games starting tomorrow at 1:05.