Mood music - Wish You Were Here by Pink Floyd

Well, Cliff Lee pitched very economically (helped out a lot by his defense) and gave up 4 runs in a complete game 7-4 victory over the Yankees.  For the Yankees, Phil Hughes looked much more hittable than we've grown accustomed to seeing, allowing 10 hits and 7 runs (6 earned) in 5.2 innings.

The defense was also somewhat shoddy with a costly bobble in center field by Curtis Granderson, and a missed tag by Francisco Cervelli, which allowed rallies to continue.  When your pitcher doesn't have their best stuff, it's hard to overcome defensive blunders as well.

But to get to the main event, as I'm sure is going to be the topic of discussion up until Hughes' next start, and will probably rear it's ugly head several more times before the end of the season, Hughes was not effective after his last start was skipped due to his innings limitation.  There are some among you who are probably ready to throw this plan under the bus and make some heads roll for "messing with Hughes."  Stop.

Hughes showed none of the signs of over-rest in today's start.  His fastball wasn't pumped up, he wasn't overthrowing, his curveball wasn't bouncing after 55 feet, and he wasn't losing the strike zone (2 BB and 67% strikes).  Hughes had a bad start, it happens, but I'm not pinning this one on a few days of extra rest.

And if we have intentions of using Hughes in the playoffs (which, between you and me, I think that we do), the day may very well come when we'll be glad that we don't allow Hughes to throw about 100 more innings than he threw last season.  Right now, Phil Hughes is a brand new racecar, and we'd like to win every race as soon as possible, but it makes sense to be careful and see how he handles before we just throw him in the fire without any restrictions.

From here on out, let the hating on Joe West commence!

A split comment of the game goes to Gelatin, Edgware, FreeBradshaw, and Jedi Master A-Rod, respectively, for their fine work in their Joe West playa-hatin'.  Their comments were:

Joe West recently tried out to become a ML Pitcher.  Sources close to him say he wanted to become a pitcher that "eats innings".

My hope is that Joe West mistakes Hughes' pitch for a scoop of vanilla.

I hope Wakamatsu does the Japanese version of Wally Backman on Joe West tonight.

Not only does Hughes have to compete against the Mariners, he has to compete with Joe West’s gravitational pull throwing off his pitches.

Play of the game was the home run by Franklin Gutierrez that made the score 3-1 (increased the Mariners odds of winning by 11.1%). 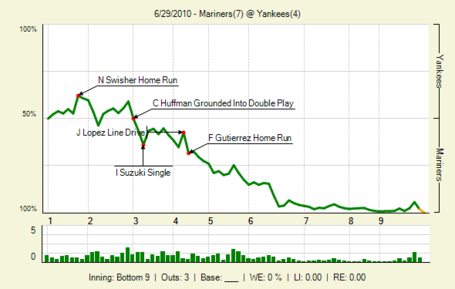