Most of the beat writers have been tweeting like crazy that Dodgers Stadium is a great place for a night at the ballpark. Tonight was certainly an interesting night in Dodgertown.

The Dodgers scored three times in the third on a combination of sacrifices, fielder's choices and errors, then twice in the fifth on a sac fly and home run (by Ronnie Belliard). And finally, they scored again in the eighth off Joba, thanks to an RBI double by Rafael Furcal.

Overall, Clayton Kershaw shut down the Yankees for seven innings outside of an Alex Rodriguez two-run home run. The Yankees were ready, however, when the Dodgers went to the pen. Ronald Belisario pitched a scoreless inning and then the Dodgers brought in their closer, Jonathan Broxton.

Broxton struck out Mark Teixeira to lead off the inning on a few questionable calls by the umpire. Next, Alex Rodriguez singled to left. Robinson Cano doubled A-Rod in, 6-3. Jorge Posada singled, first and third. Curtis Granderson walked, bases loaded. Chad Huffman singled, two runs scored, 6-5. Colin Curtis hit an RBI ground out, 6-6. That was the top of the 9th.

In the bottom half of the 9th, Mariano Rivera came in and shut down the bulk of the Dodgers lineup. Come the 10th, Joe Torre brought in Ramon Troncoso, who gave up a single and a fielder's choice. With Cano and Granderson due up, Torre did the textbook move and brought in lefty George Sherrill. Thank you, Joe. Cano hit a two-run homer to left-centerfield and the Yankees went up 8-6.

Rivera continued his solid outing by finishing off the Dodgers in the bottom of the 10th and the Yankees won the game and the series.

Two Dodgers were ejected for arguing balls and strikes - while both calls seemed correct, the strike zone was a mystery throughout the game. 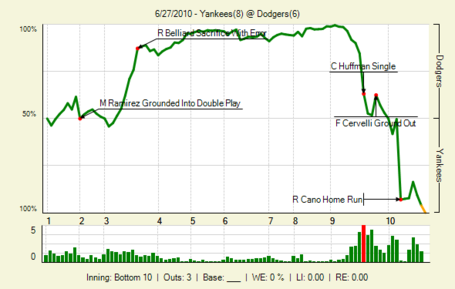