Share All sharing options for: All Sabathia: CC goes eight in 2-1 Yankees win

Playoff atmosphere, Manny Ramirez, Joe Torre and an A-Rod homerun - this was a blast to watch.

Outside of A-Rod's homer (and double), there wasn't much to see on the offensive side: Jeter had two hits, Cano had a single and a HBP and Posada had a RBI single. To his credit, Vicente Padilla pitched a helluva game. On most nights, that's good enough to win.

Play of the Game: No doubt about this one, A-Rod's mammoth shot in the sixth put the Yanks up one, a lead they would not relinquish (+19%).

On the Dodgers postgame show, Steve 'Psycho' Lyons bitched about the ninth inning strikezone. Then, to my surprise, Joe Torre complained. To paraphrase: "Mo doesn't need any help, but those calls were terrible." Here is that zone - 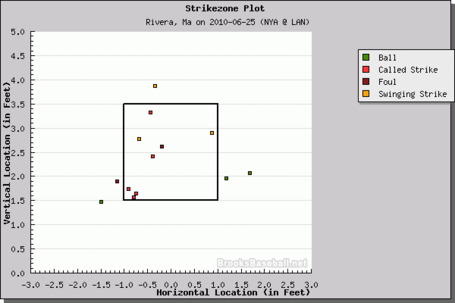 Those three strikes in the lower left corner happen to be inside the strikezone. In fact, not one pitch outside the zone was called a strike.

One more thing: I can't ever remember hearing the "Yankees suck" chant so often in one game, especially when the opposing team was either tied or losing.