9-3, The Empire Strikes Back

Share All sharing options for: 9-3, The Empire Strikes Back

Mood music - All Along The Watchtower by Jimi Hendrix.  [Hendrix brings the win, he gets doubled up on for mood music]

What was a close game and a pitcher's duel between Andy Pettitte and Dan Haren turned into a blowout when the Yankees hitters got their hands on the Diamondbacks "shaky" bullpen.  A-Rod was the big star early with a 2-run home run and an RBI single in his first two plate appearances, and Mark Teixeira took another step in the right direction today by smacking two ringing singles.

Pettite was excellent....again, allowing only a two-run single in the 2nd inning to Dan Haren (who apparently rakes, who knew?)  Joba and D-Rob were used in the mopup time for the 8th and 9th, with Joba throwing a clean 8th, and D-Rob getting into a little bit of a tiff in the 9th.

Play of the game - Both A-Rod's homer and Haren's 2 RBI single were worth 17.2%, but everyone knows the tie goes to the centaur.

Comment of the game goes to long time listener with this gem:

Sheer domination, get him a leather outfit and a whip.

Tomorrow the Yankees will shoot for the series win with Javy Vazquez on the hill, while the D-Backs will send out recently acquired Dontrelle Willis.  So hopefully, we can chase the D-Train early and get back into that Arizona bullpen. 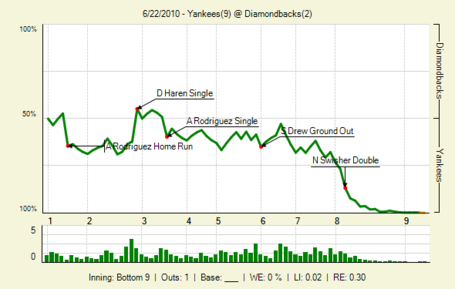