Mood music - Baba O'Riley by the Who [Keepin' it with The Who, as Eminence Front brought us the W]

The Yankees got to Doc early and often, touching him up for a career high 3 home runs (Granderson bomb, Swisher bomb, Teixeira gift). The last 3 times Doc has given up three dingers have been against the Yankees, according to the immeasurable war chest of baseball knowledge that is Michael Kay.  But the scoring started with a two run triple into the gap by Brett Gardner (at which point I was screaming "inside the parker" at my TV, I doubt I was alone).

CC looked the way CC has looked recently.  Sometimes he reminds everyone why he's an ace, and sometimes he can't put his fastball where he wants it and looks vulnerable.  After simply dominating in the first three innings, CC had a long wait while the Yankees played long ball of Halladay, took a comebacker off of his pitching hand, and subsequently struggled in the 4th and 5th, but managed to give up only three runs.

Finally, D-Rob and CHOP cleaned up the 8th and 9th, and Cervelli took out an insurance policy to make sure no one went into cardiac arrest.

Comment of the game: long time listener for foreshadowing the Castro strikeout:

Get Castro the way Kennedy should have in the 60s. 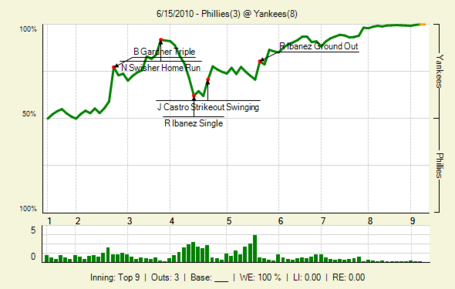 Tomorrow will be A.J Burnett against Kyle Kendrick Jamie Moyer (Charlie Manuel getting cute on me), and the Lake Show are currently up 20 points in Game Six, for those of you who care about such things.