Share All sharing options for: Starting the Cliff Lee Watch

Watching him pitch to the Rays last night had me imagining him in pinstripes in 2011. He worked quickly, threw (quality) strikes, showed a formidable arsenal, and most of all, was effective. He was like a left-handed Jon Lieber, only better.

As soon as I joined the broadcast, he struck out Carlos Pena on three pitches: two on the inside corner, then a well-placed outside fastball for a swinging strike three - 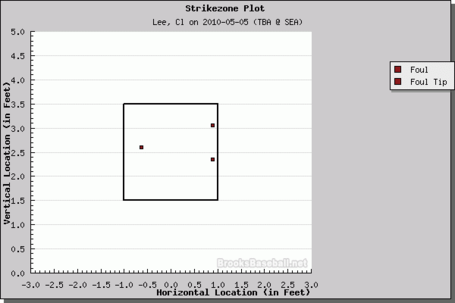 Obviously there are injury concerns - he didn't make his first start until April 30th due to an 'abdominal strain,' a recurring condition for Lee (he's been on the DL twice before with that ailment). In spite of that, it shouldn't be too worrying: Lee's thrown at least 179 innings in all but one of the last six seasons (the only 'under' coming in 2007 when he tossed 145 frames between the Show and the minors). Look at it this way, he's certainly no more of an injury risk than A.J. Burnett, who we signed at the age of 32 (Lee's age next year) for five years.

He's one of the best lefties in the game, has shown that the 'Big Stage' doesn't affect him (if you believe in that stuff), and will be 'only' 32 (the new 29?). A great lefty in Yankee Stadium... what's not to like?

(I'm assuming, of course, that Vazquez doesn't return. Even if he has a solid next five months, his 'baggage' just seems too much for Cash & Co. to re-sign).

To clarify the FA situation: Lee, Vazquez and Pettitte are all free agents after the season.