I put a lot of stock in Pythag records.  I know there are better, savvier ways to predict a team's success and failure, but for a projection I think in the ballpark is accurate enough (that's why they play the games).  Plus, I like an approach that I can calculate on my notepad during staff meetings.

So during yesterday's staff meeting, I started thinking about what it takes to best a pythag record.  The Yankees have beat their pythag by at least 2 wins every season in the last decade except for 2007.

Certainly, playing at home is important (the home team wins a 1 run game roughly 17% of the time).  But that's a matter of luck and out of the control of a GMs and managers.

A solid bullpen is important, and a lot of offense late in the game is important.  No brainer, right?

Allowing for a small sample size and some luck (no other explanation for 2007), I think this might be a situation when offense is more important than defense: 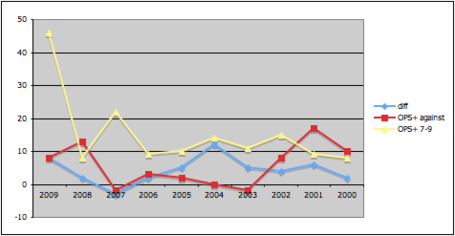 The Yanks beat their pythag by 8 games in 2009 (second highest total of the decade).  Their offense in the 7th-9th innings was 46% (!) more potent than average.

On average, though, the Yanks' offense has hovered around 15% above average, and they've beat their pythag by around 5 games.  2 of the 3 lowest pythag differences came in the seasons the Yanks' late inning offense dropped to league average.

On the other hand, the best pythag seasons (2004 and 2009) don't correspond with our bullpen's best seasons.

Research issues aside, hopefully this means that the Yanks can count on picking up 4 or 5 games on their pythag record next season.  This is really important, because the difference between the Yanks, BoSox and Rays was less than their pythag difference.