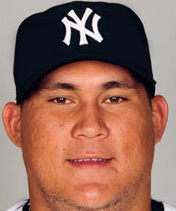 One of the most intriguing candidates for a spot in the New York Yankee bullpen this spring is one of the pitchers we probably know the least about.

That would be 25-year-old right-hander Romulo Sanchez, a massive 6-foot-4, 250+ pound flamethrower. Sanchez was acquired from Pittsburgh last May in a trade for the going nowhere Eric Hacker, so if he gives the Yankees anything at all this will have to be considered an excellent, though small, deal by General Manager Brian Cashman.

Sanchez' 2009 AAA numbers (6-5, 4.09 ERA, 1.506 WHIP) were not great. LoHud's Chad Jennings, who saw Sanchez regularly last season while covering AAA Scranton-Wilkes Barre, is probably the best source of information on Sanchez and he says look beyond those numbers.

Here is Jennings' take on Sanchez' chances this spring.

Sanchez can get his fastball into the high 90s, but he’s never been an especially overwhelming strikeout pitcher. He’s actually never finished a season with more strikeouts than innings pitched, but that trend seems to be changing.

In a few weeks, Sanchez will report to Tampa with the rest of the Yankees pitchers and catchers. It will be his first spring training with the Yankees, and you can bet he’ll open some eyes with that fastball (he has a pretty good changeup too). He’s a long way from being a bullpen favorite, but Sanchez belongs in that group of pitchers who could make enough of an impression to break camp with the big league club.

Pending Pinstripes, which focuses on the Yankee minor-league system, thinks it is likely Sanchez will be in New York at some point during the 2010 season.

Scouting Report: Sanchez is a huge guy, standing 6'5" and weighing at least 250 pounds. At the end of the 2009 season, Sanchez's stuff was as good as it ever has been. He was dialing it up to 99 in the fourth inning as a starter. His fastball is his plus pitch. If his improvements are real, he can be expected to sit in the high 90s and touch 99 with some movement. His changeup is decent, and he could probably afford to use it a little bit more.

He throws his changeup at around 86 MPH, a nice difference from his heater. Again, his slider is just decent, coming in at 85-86 with decent movement but a lack of command. He  has a great fastball, and that is what he works off of. He can struggle with command in a given outing, but he generally is able to throw his fastball for strikes and generate swings and misses with it. Because his other pitches are probably below average, he's only a bullpen option in the majors. His heater gives him the upside of being a guy in the back-end of the bullpen.

2010 Outlook: I was happy to see the Yankees add him to the 40-man roster. It was nice to know I'm not the only one who considers the guy a prospect. Sanchez is a pretty sure bet to start in Triple-A Scranton, but I really can't tell you whether he'll start or relieve there. My guess would be that they'll start him out in the bullpen, since that is where his future lies. If he gets off to a good start, you can expect him to be one of the first call-ups in 2010.

All I know for sure is Sanchez will be one of the most intriguing players to watch once the exhibition games begin.

Other stories in this series