This Dead Horse Had It Coming

Share All sharing options for: This Dead Horse Had It Coming

BRONX, NY — The Yankees found a potential solution to their problematic starting rotation today when they added a 25-year-old right-hander, once considered among the best starting pitching prospects in baseball, who joins the rotation with a 4.18 ERA and 206 strikeouts in 221 2/3 prior innings as a major league starting pitcher. General manager Brian Cashman was particularly enthused about this addition because his newest starting pitcher will be among the least expensive pitchers on his roster in 2011 and didn't cost the Yankees anything to acquire.

That fabricated report keeps swirling around in my head, a happy little fantasy about a pitcher the Yankees already posses in real life, but refuse to put in the starting rotation. His name, of course, is Joba Chamberlain.

Yeah, I know, I know. This discussion is pointless. The Yankees seem to have finally made their minds up on Chamberlain, and Brian Cashman has said repeatedly this offseason that Chamberlain is not being considered for a rotation spot, and that the team views him exclusively as a relief pitcher going forward. I know that, but every time I look at the Yankees' projected 2011 rotation and the available options for improving it, Chamberlain keeps poking his cherubic little face in there gesturing to those career splits.

I just don't get it. Consider Chamberlain's career line as a starter against the 2010 season of Phil Hughes, a pitcher who arrived in the majors with similar hype and is just nine months Chamberlain's junior:

The ERAs are identical. Joba has the better strikeout rate. Hughes has the better walk rate. If you factor in those opponents' batting averages on balls in play, the difference in WHIP starts to melt away, and Joba's ERA starts to look more impressive given his comparatively bad luck/defense. Despite those similarities, Hughes will enter the season as the Yankees' number-two starter, while Chamberlain won't even get a chance to battle the likes of Ivan Nova and Sergio Mitre for the fifth spot.

Something is very wrong here. 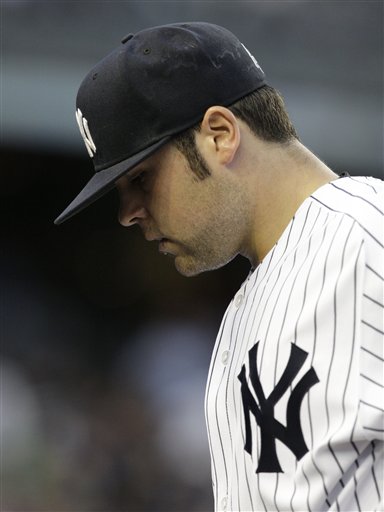 If the Yankees have a good reason for keeping Joba Chamberlain in the bullpen despite the needs of their rotation, they are keeping it to themselves. (AP)

One common comment regarding the Yankees suddenly firm stance on Chamberlain is that we outsiders aren't privy to all of the information informing the Yankees' decision. Perhaps they have done physical studies on his arm and concluded that he won't hold up under a 200-inning workload no matter how gently they ease him into it. Perhaps, but I find that difficult to believe. The only elaboration Cashman has given on the team's decision thus far has focus on the gap in Chamberlain's velocity as a starter. Here are Cashman's comments:

Nov. 17: "Joba to the pen. We made that decision after spring training. We're not looking to put it back. We told him in the spring, 'You're a reliever now.' That's it. He's a reliever, that's our attitude."

Dec. 21: "His stuff plays so much significantly [better] out of the pen. We had given him an opportunity to pitch in the rotation, and the velocity dropped. It’s just not the same stuff."

I can't argue that Chamberlain's stuff isn't better when he pitches in short stints out of the bullpen. I can, however, argue that he'd be of greater value to the team as a league-average 200-inning starter than as an above-average 70-inning reliever. Consider, for a moment, Chamberlain's 2010 performance compared to that of John Lackey, who in his first season with the Red Sox posted an ERA+ of 99 in 215 innings with peripherals in the neighborhood of Joba's career marks as a starter (1.42 WHIP, 2.17 K/BB). Using Baseball Prospectus's twin win-expectancy statistics SNLVAR (Support Neutral Lineup-adjusted Value Above Replacement) and WXRL (Win eXpectancy added above Replacement, adjusted for Lineup), an unfortunate linguistic nightmare that actually describes two very useful and nearly identical stats used to evaluate starters and relievers, we see that Joba was worth 1.3 wins more than a replacment-level pitcher in 2010, while Lackey was worth more than twice that at 2.8 expected wins above replacement.

That 1.5 win gap is not the entire story, however, as the Yankees are flirting with replacement level at the back of the rotation but could easily replace Chamberlain's potential 2011 bullpen performance by signing one of the remaining free agent relievers such as Jon Rauch or Kevin Gregg. That makes Joba's potential value as a starter, which per Lackey's SNLVAR above could be something close to three wins, pure gain for the Yankees over their current situation with Joba in the pen and someone from the Ivan Nova/Sergio Mitre/desperation free agent signing grab bag in the rotation.

Now, I recognize that, even if the Yankees do pull a 180 and put Chamberlain in the rotation (which they won't, but you've humored me this far, so you might as well see this thing through), he might not reach 200 innings because of the inefficiency he showed as a starter (oh those bases on balls!). I do not think, however, that he would need to be subject to an innings limit. Yes, his career high was his 157 1/3 innings in 2009, and he threw less than half that many frames as a reliever last year, but he was due to pitch without a limit heading in into 2010, is now 25, which is the upper limit of the age-range for "young arms" that need to be coddled, and, really, if the Yankees were really just going to let him go to waste as a middle reliever anyway, what's the purpose of protecting his arm?

Speaking of which, for those who think it's important that Joba remain in the pen so that he can succeed Rivera as closer, consider that Rivera is signed through 2012, and Chamberlain is a free agent after the 2013 season. Maybe Rivera retires after his current contract (for any other player it would be very likely, but Rivera has yet to show any meaningful sign of age despite having just turned 41), and maybe Chamberlain thrives in the closer role in 2013 and decides to stay in that role and with the team, but he'll do so at market price if he does, and it's all the more likely that either Rivera blocks him for that one last team-controlled year, or he fails to seize the job and uses his free agency to sign with a team that will let him return to starting at age 28. Besides, with all of the pitching talent in the Yankees' system, I find it difficult to believe that there's not another prospect already in the system who could be as effective in that role as Chamberlain.

That's really all beside the point, however. At this moment, the Yankees are faced with a dilemma. Their decision to wait on Cliff Lee and Andy Pettitte rather than sign one or two solid second-tier free agents to round out their 2011 rotation blew up in their faces when Lee signed with the Phillies. With all of those solid second-tier guys already off the market, the Yankees' best remaining option is moving Chamberlain into the rotation and signing a veteran reliever to replace him in the pen. It's a move that could improve their 2011 outlook by as much as three wins at a fairly modest price, something like $3-5 million annually for as little as a year or two for the relief pitcher, but one they won't even consider. Until the team offers a better explanation than the comparative speeds of Chamberlain's fastball, the only conclusion that I can draw, as unlikely as it might be, is that they are being negligent.