Share All sharing options for: An Unusual Hit Parade 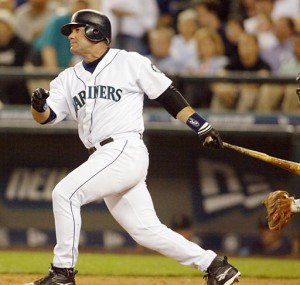 The biggest hit of Edgar Martinez's career eliminated the Yankees from the 1995 postseason and carried even bigger ramifications for both teams (AP).

Earlier this week, while writing up a Baseball Prospectus/ESPN Insider piece advocating for the election of Edgar Martinez to the Hall of Fame, I came across a rather neat discovery, albeit one that may be painful for dyed-in-the-wool Yankees fans to recall. Martinez's 1995 AL Division Series-winning hit against the Yankees, which drove in both the tying and the winning runs in the form of Joey Cora and Ken Griffey Jr., has its own Wikipedia page. That hit is known to Mariners fans as The Double, and it carried ramifications far bigger than just advancement to the next round of the playoffs for one team.

A bit of personal back story is in order here: I moved to New York City in 1995, a lifelong Dodgers fan old enough to remember the 1978 and 1981 World Series matchups between the Dodgers and the Yankees, with the 1977 one at the outer edge of my baseball consciousness. I'd grown up rooting hard against the Yankees, though I had soft spots for many of their players, including Reggie Jackson and Sparky Lyle. Meanwhile, as American League clubs went, I had developed a longstanding affinity for the Mariners based upon having been born in Seattle, with family on both sides of my tree still residing there, and I numbered Griffey and Randy Johnson among my favorite players. So when the Yankees and Mariners squared off in 1995, I was firmly rooting for Seattle. To this day, that seesawing slugfest of a series — none of the games featured fewer than 11 runs, and the two clubs averaged 6.8 runs per team per game — remains the best five-gamer I've ever seen, and not even the evolution of my rooting interests to favor the Yankees has changed that.

The Double arguably saved baseball in Seattle. The Mariners had played in the grim Astroturfed monstrosity of the Kingdome since their 1977 inception, drawn poorly and usually lost, at least until 1995. They needed a new home, and the threat of a franchise sale and relocation loomed if they didn't get one. The Mariners had never reached the postseason before; getting there required a mad dash in which they overcame a six-game deficit with just 16 games to play, forcing a one-game play-in with the Angels — a game which required them to use their ace, Johnson, thus limiting him to one start and one relief appearance in the ensuing ALDS. That they won that game and went on to erase a two games to none deficit in the five-game series created such a euphoria among Seattle fans that within a week of the series' ending the Washington State Legislature went back to the drawing board to approve a funding package for what became Safeco Field. Mariners manger Lou Piniella called the Double and its aftermath, "The hit, the run, the game, the series and the season that saved baseball in Seattle." Martinez became a folk hero among Mariners fans, particularly as he stuck around while Johnson, Griffey and Alex Rodriguez forced their ways out of town in search of bigger paydays.

The defeat carried major ramifications for the Yankees as well. Manager Buck Showalter was forced out of his job and replaced by Joe Torre, who guided the team to the first of four world championships, six pennants and 12 consecutive postseason appearances on his watch. Don Mattingly retired and was replaced by Tino Martinez, who was acquired from those very Mariners in a trade that also netted bullpen stalwart Jeff Nelson. Who knows how much differently things would have turned out for either side had it not been for the Double?

In any event, the devotion of a whole Wikipedia page to Martinez's hit got me to wondering which other big hits in baseball history had taken on such lives of their own that they had pages separate from those of their creators. I polled my Twitter followers, who helped gather the following list, which isn't necessarily comprehensive, but it is somewhat revealing:

• Babe Ruth's Called Shot: The home run Ruth hit in the 1932 World Series against the Cubs which Ruth preceded by a pointing gesture is one of the most famous in baseball history, though the Bambino's exact intent remains one of baseball's eternal great debates.

• The Shot Heard 'Round the World: Bobby Thomson's pennant-winning blast off the Dodgers' Ralph Branca, which was paired with announcer Russ Hodges' immortal call, "The Giants win the pennant! The Giants win the pennant!" rates as one of the signature moments in sports history, not only because it was a decisive blow which changed defeat to victory with a World Series berth at stake but because it was the culmination of a remarkable comeback which saw the Giants overcome a 13-game deficit over the season's final 44 games. In their SportCentury series, ESPN ranked it second only to the 1958 NFL Championship between the Colts and the Giants (at Yankee Stadium) among their Greatest Games of the 20th Century. Nobody can even tell you who did the radio for that game though. Feh.

• Kirk Gibson's 1988 World Series home run: Though it doesn't have a catchy name like the previous three, Gibson's Game One-winning pinch-homer off of the nearly infallible future Hall of Famer Dennis Eckersley is a modern classic. It was memorable for the separately classic calls by Vin Scully (TV: "In a year that has been so improbable... the impossible has happened!") and Jack Buck (radio: "I don't believe what I just saw!"), but even more for the visual of the injured Gibson pumping his fists as he limped around the bases feeling no pain. His blast set up the Dodgers' unlikely defeat of the heavily favored Oakland A's in five games, and it was Gibson's only at-bat of the series.

And that's the list so far. Neither of the World Series-winning homers by Bill Mazeroski (1960) or Joe Carter (1993) have their own pages, nor do Roger Maris' 61st homer (1961), Hank Aaron's 715th homer (1974) — all of them are subsections of pages related to their participants or their events. As are the record-setting home runs of Mark McGwire and Barry Bonds — less iconic because of the two sluggers' connections to the usage of performance enhancing drugs — and the big World Series hits by Reggie Jackson, Luis Gonzalez and Kirby Puckett (all suggested by various Twitter followers).

That's not to say some of aforementioned those moments don't rate with the four above; certainly the cultural significance of Aaron's record-setting shot merits its own page, and in the grand scheme of baseball history at least outweighs the hits of Martinez and Gibson in terms of its importance. But when it comes to the populist electronic encyclopedia where anyone can create a page on any topic, it appears that thus far, nobody has devoted the time to doing so, making the above list an unusual hit parade.