Share All sharing options for: So Long Already, Artie!

Paul Simon’s 1970 song "So Long, Frank Lloyd Wright," sung by Art Garfunkel, features a long fadeout during which the phrase, "So long… So long…"is repeated about half a dozen times. During the final repeat, an apparently exasperated Simon shouts, "So long already, Artie!" The two men dissolved their partnership not long after the song’s release on the album Bridge Over Troubled Water and haven’t put out a record of new material since. 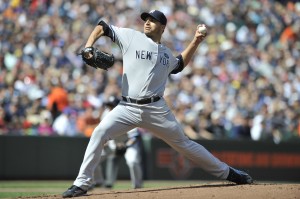 Like Mr. Simon, I’m ready to shout, "So long, already," not at Garfunkel but at Andy Pettitte. They Yankee with the third-most wins in team history has been waffling all winter, and his indecision has been accorded more weight than it deserves. A 39-year-old pitcher who made only 21 starts the previous season, no matter how good, only deserves to be accorded so much projected value.

The list of postwar left-handers 39 or older who have pitched at least 100 innings in a season with ERAs lower than league average is less than 30, and when you start knocking of pitchers that don’t have much in common with Pettitte like Randy Johnson and Tommy John (other than being old pitchers who wore pinstripes), the list shrinks considerably. The best and most optimistic point of comparison is voluble ol’ David Wells, who put up a 3.75 ERA for the Yankees, and chalked up 19 wins doing so, for the Yankees in 2002. After that, Wells had a few more years of league-average pitching in him before finally falling off the beam for good at 43. Tom Glavine had good-not-great years at 39 and 40. Kenny Rogers was just decent at 39 but was excellent at 40 and 41. If you really want to sell yourself on the idea of Pettitte as a durable starter, you could think about Jamie Moyer, who won 116 games between 39 and infinity.

This is just comfort food for the mind; it’s pretty clear that when you start with all the left-handers to take a major-league mound from 1946 and 2010 and you can only come up with about 28 guys to start with, you’re dealing with a cast of outliers. Now, Pettitte is an outlier too; you have to be one to have a 16-year-career in the first place, and for a team to even think about pitching you at 39, let alone want you back as desperately as the Yankees (and the media, and the fans) seem to want Pettitte. It would in no way be a bad thing if he came back, and he might even be good if he’s healthy enough to pitch.

That last caveat is the problem. Let’s get back to that list of older postwar left-handers. Only 25 38-year-old lefties since 1945 have thrown 100 innings in a season, and only nine got to 190 innings. Roll the calendar forward one year and look at the 39-year-olds and the list shrinks to 17 pitchers over 100 innings, while the list of 190 or more guys holds at nine. They’re mostly the same guys in both cases—Moyer, Rogers, Glavine, Warren Spahn, Steve Carlton. Wells and Johnson happen not to make both lists because they both got hurt in their age-38 seasons, just like Pettitte. As he showed last season, the stuff may be there at this age, but the flesh is not always compliant.

Now, even there we can bend over, not too far backwards, and say, "Well, hey, if the Yankees get 20 starts out of Pettitte that were the same quality as last year’s 21 starts, that ain’t a bad thing!" This is true, but it’s also the reason that I’m singing "So long" with Simon. If the most starts you can safely pencil in a returned Pettitte for is 20, then the Yankees have another 142 starts to deal with, including at least 12 that Pettitte will leave vacant. As such, whether the Pettitte comes back or not, the Yankees have to prepare as if he’s not coming back. As I’ve written even in my sleep, there was little defense last season for blowing starts on Sergio Mitre and Dustin Moseley. Now, forewarned, really, really forewarned, the Yankees need to identify their answer to this question, "What if we do get Andy to come back but he can’t pitch every fifth day?" With the rotation already short and Pettitte’s future equally so, they can’t afford to waste the starts on more veteran filler; playoff appearances in 2011 and years beyond depend on the answer.

In essence, the Yankees need a fully-operational starter, one who is competent to take over whether Pettitte returns or if he does not. The external options are depressing and Brian Cashman is not in the habit of overpaying in trade for other teams’ weak tea, so it’s time for the kids to start limbering up. Jeff Francis, Brad Penny, Freddy Garcia, Chris Young—these aren’t necessarily better options than starting from scratch.

Thus, much as saying "So long, Frank Lloyd Wright" is redundant given that no matter how many times you say it, the buildings remain, saying, "So long, Andy Pettitte" requires one to deal with consequences that are exactly the same as if you don’t say it. Whether he comes back or not matters, but not nearly as much as who the Yankees have lined up behind him. Focusing on Pettitte’s decision is missing the forest for the big left-handed tree.