Bronx Bombers on the Ballot

Share All sharing options for: Bronx Bombers on the Ballot 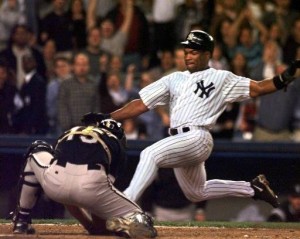 Though his time in Pinstripes is secondary to his case, Tim Raines is eminently worthy of election to the Hall of Fame (AP).

Most people don't associate Christmas with Cooperstown, but Hot Stove season is Hall of Fame season, and a good portion of the current baseball chatter centers around which candidates on the 2011 ballot — which was sent out to eligible Baseball Writers of America voters earlier this month — will gain their bronze plaques next summer. Over at Baseball Prospectus, I've been analyzing the ballot position by position using my JAWS (Jaffe WARP Score) system to identify the players who live up to the Hall of Fame standards; thus far I've covered the starting pitchers, the first basemen, and the second basemen, with the rest of the positions still to come before the voting results are announced on January 5. While none of the seven former Yankees on the ballot appear likely to gain entry, at least one deserves the honor, and all are worth at least a brief mention here.

Created with the stated goal of defining and raising the standards of the Hall after decades of haphazard selections, JAWS is a tool to evaluate candidates by comparing them to the already-enshrined players at their positions on the basis of career and peak performance (defined as a player's best seven seasons). Both career and peak are measured in Wins Above Replacement Player (WARP), which values each player's hitting, pitching, and fielding contributions relative to those of a freely available reserve or minor league call-up in runs, and converts those runs into the currency of wins. JAWS averages the career and peak figures; effectively, a player's best seasons are double-counted because they have a demonstrably nonlinear effect of improving his teams' chances of winning championships. JAWS doesn't take into account awards, postseason performance or other more subjective criteria, all of which can shade a player's case one way or the other but can't overcome major shortcomings in the meat-and-taters department of regular season performance.

Of the seven former Yankees among the 33 players on this year's ballot, only two are holdovers from past years, Don Mattingly and Tim Raines. Neither is a threat to receive the necessary 75 percent of the vote needed for election, at least this time around; on his 10th ballot, Mattingly received 16.1 percent of the vote, while on his third go-round, Raines received just 30.4 percent. Meanwhile, Kevin Brown, Al Leiter, Tino Martinez, Raul Mondesi and John Olerud are all newcomers, and none appears likely to have much of a shot. Here's how those players stack up relative to the position standards:

And here are the position standards themselves, the average scores of the already-enshrined players at each position, with the lowest scores — almost invariably underqualified Veterans Committee selections — dropped:

As you can see, only a few ex-Yankees on the current ballot are even within hailing distance of the JAWS standards, primarily for what they did when they weren't wearing pinstripes:

• Raines is one of the top eligible players not already in the Hall, a player who combined the virtues of dazzling athleticism and cerebrality. He was at his best during his early career with the Expos; over a five-year period from 1983 through 1987, only Cal Ripken was more valuable in terms of WARP. While Raines came down from that peak during his extended stint with the White Sox and shorter tours of duty with the Yankees and three other teams, the combination of his ability to get on base (.385 career OBP) with his skills and smarts as a baserunner (an MLB-best 84.7 percent success rate in stolen bases) made him a valuable and criminally underappreciated player throughout his career. Had he reached 3,000 hits, he'd be a lock; as it is, he collected 2,605 of them while walking another 1330 times, enough to reach base more often and gain more bases than 3,000 Hit Club member Tony Gwynn, a direct contemporary. Raines ranks fifth all-time among left fielders behind Barry Bonds, Stan Musial, Ted Williams and Rickey Henderson, and he absolutely should be in the Hall of Fame.

• Brown was at the tail end of his career by the time he got to the Yankees, and the memories of his time in pinstripes aren't fond ones; he battled injuries, including a self-inflicted broken hand, and flopped during the 2004 ALCS against the Red Sox. But for a time, he was one of the top pitchers in the game, a wiry, ornery sinkerballer who was the ace of two pennant winners, the 1997 Marlins and 1998 Padres — a story not dissimilar from that of Cliff Lee's position coming into this winter. Brown cashed in on his hired-gun status by netting a record-setting seven-year, $105 million contract from the Dodgers, but back and elbow injuries prevented him from making more than 22 starts in four of those years (caveat emptor, Ruben Amaro, Jr.). Though he was outstanding at run prevention, Brown doesn't have a great case for Cooperstown; he never won a Cy Young, notched "only" 211 wins, and was mediocre in the postseason. He falls just short of the JAWS standard on both career and peak counts; had he stayed healthy into his late thirties and early forties, he'd have a much stronger case.

• Olerud was a patient hitter with a sweet swing, a keen batting eye, and a good glove, all of which he showed off to great effect with the Blue Jays, Mets and Mariners. He was a key part of Toronto's 1992 and 1993 World Champions, winning a batting tile with a monster .363/.473/.599 showing in the latter year, and he helped the Mets and Mariners advance all the way to the League Championship Series in three straight years (1999-2001). By the time he got to the Yankees, his power had deserted him, but he remained a decent bench bat. If he had any substantial career after the age of 33, he'd have the numbers to match the JAWS standard, if not ones that would impress BBWAA writers struggling to come to grips with the glut of power-hitting first basemen from the so-called "Steroid Era."

The other four ex-Yanks on the ballot have lesser cases:

• I've hammered Mattingly's case every year since the introduction of JAWS, to the point that I don't even bother to go on at length anymore, given that he hasn't even received 20 percent of the vote since 2002. The golden child of the Great Yankee Dark Age between the Billy Martin/Bob Lemon World Series teams and the Joe Torre ones, Mattingly was a fantastic hitter and a slick fielding first baseman at his peak, and a perennial MVP candidate. Alas, back woes sapped him of his power, making him a very ordinary player outside of his 1984-1987 peak and bringing his career to a premature end at age 34. The gates of Cooperstown aren't entirely closed to him; with any luck, he'll find success as a manager, and get over the top in front of a Veterans Committee to be named later, just as Torre will.

• Leiter bookended his career with stints as a Yankee, struggling for years with arm injuries stemming from overuse, including a 163-pitch marathon just before he was traded away. He didn't emerge as an above-average starter with a regular rotation spot until age 29, but went on to enjoy some solid seasons for the Blue Jays, Marlins and Mets, reaching the World Series as part of Florida's 1997 upstarts and the Mets' 2000 Subway Series entrants. As good as he was, he only had a couple of truly outstanding seasons, and rarely pitched well enough to merit even secondary consideration in the Cy Young balloting.

• Mondesi was a five-tool standout from the Dominican Republic who won Rookie of the Year honors with the Dodgers in 1994, reached the 30-homer, 30-stolen base club in 1997 and 1999, and started going downhill after being traded to the Blue Jays and battling injuries in 2000. He still had some power and a cannon for an arm by the time he reached the Yankees; watching him cock his gun after fielding a rebound off the right field wall, just daring a sucker to try taking the extra base on him was almost worth the price of admission itself. Alas, he wasn't of much use as a hitter after age 32. He's now the mayor of his Dominican hometown, San Cristóbal.

• Martinez came up with the Mariners and emerged as a star in time to help them beat the Yankees in the 1995 postseason. That following winter, he was traded to New York and faced with the unenviable task of replacing Mattingly. He acquitted himself better than anyone could have hoped, becoming a fan favorite as well as a starter on a team that won five pennants and four championships in a six-year span. Nonetheless, only a few of his seasons were strong on WARP terms; his biggest season, when he hit 44 homers while batting .296/.371/.577 and finished second in the MVP voting, was worth just 5.1 WARP, and none of his other seasons are worth even 3.5 WARP. By the end of his initial run with the Yanks, he was a drag on the offense, and like so many others on the ballot who don't measure up, his days as a productive payer ended before his mid-thirties.

As I continue evaluating the ballot at BP, I'll have some more JAWS-related goodies as they pertain to the Yankees for this space in the coming days.