The Tools of Ignorance: Saturday News

Share All sharing options for: The Tools of Ignorance: Saturday News

Pitching in 2011 will affect Andy Pettitte's Hall of Fame chances. Well, duh.  Pettitte has never been a shoe in, so every extra year of longevity matters.  I have Maddux, Pedro, RJ, Clemens, Glavine, Mussina, Smoltz, maybe even Kevin Brown ahead of Pettitte among retired players, and guys like Halladay, Sabathia, Buehrle, Oswalt all poised to overtake him.  If Pettitte pulls together another 20 or 30 wins over the next season or two, however, then he might win a few more votes for his consistency.

The Phillies have the best rotation in baseball, and the defending champion Giants are no slouches.  But I think the Yankees are a lot closer to being a top 5 rotation than people give them credit for.  If Pettitte comes back (see above), or if Burnett manages to rebound in a big way, then I think the Yankees will get themselves into the conversation. They won't match the Phils in 2011, but I think the rotation has a chance to survive the long season, and also run deep into the postseason.

An archivist at Drew University uncovered footage of Jackie Robinson serving as moderator of a debate so lost that no one knew it was missing. Even Rachel Robinson (Jackie's widow) had forgotten he'd hosted the television debate that posed a hypothetical moral dilemma to a panel and audience.

It's so easy for me to file Jackie Robinson away in a little box of my understanding- he was a legend before I was born, and the fights he fought feel (with the periodic glaring exception) like they were won lifetimes ago. This makes him a little more human to me.  I appreciate that.

Speaking of appreciation... the future Mrs. Scape and I held our first annual cookie decorating contest on Christmas Eve Eve.  In a stunning turn of events, my Yankee did not win the voting for  "Best Sport." 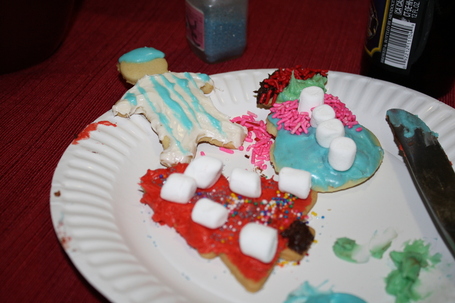 I don't understand how I lost either.

I'll be spending Christmas with her family in Jersey, and then we'll head to Upstate to spend the rest of the weekend with mine. Whether you celebrate, however you celebrate, have a great time. Be safe, and I'll see you Tuesday for the discussion of Bullpen Gospels.

Be excellent to each other.