Apologies for being somewhat quiet the last couple of weeks: all four members of your Bible-study group were busy preparing the Baseball Prospectus annual for publication, me most of all (it has been my whole life since the end of the World Series, which seems like years ago), and the dearth of compelling Yankees news has been almost painful. Do you really want to have a conversation about whether or not Johnny Damon should be brought back? I feel like that would be more painful than informative. The fellow now has no defensive position and had his lowest home run total since 2001 and his lowest stolen base totals since 1995, when he played in only 47 games. He still gets on base at a decent clip, but even if Jorge Posada hadn’t been banned from catching, would you really want a designated hitter who slugged .401? Damon’s patience, veteran sang-froid, and camera-ready smile would make him a decent reserve but for his problematic inability to serve as an extra outfielder. In these days of swollen bullpens, the days of pure pinch-hitters are gone—even one of the greats like chubby Smoky Burgess wouldn’t be able to hold a roster spot. 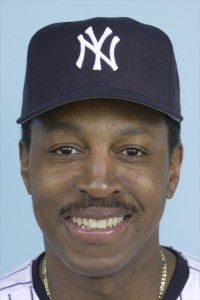 Willie Randolph: Still the best, and, er... What were we talking about? (AP)

I’m also not too enamored of the whole Andy Pettitte thing right now, because I feel like he should have the courtesy to let the Yankees know what he’s going to do already. "Hamlet" is a heck of a character, but you don’t want him on your team, or half-on it. That said, given the lack of available pitching, whether he tells the Yankees or not really makes very little difference to the way they can proceed. If he decides to come back, great. If not, he didn’t leave the team in the lurch because it wasn’t like they passed on some 15-game winner to hold a spot open.

It feels a bit too early to have one of those "Should Derek Jeter continue to lead off" discussions since (A) the answer is clearly no, and (B) we don’t know how Joe Girardi plans to build his batting order anyway. I also figure I’d better hold onto my best Sergio Mitre material until we know how seriously he’s going to be considered for the fifth starter’s spot. Speaking of which, we could have another "Joba to the rotation" discussion, but that horse has been beaten so severely it is no longer recognizable.

Normally, at this time of year I might dig deep and give you something like a ranking of the team’s great second basemen from Del Pratt to Robinson Cano, but I think we need a few more MVP-level seasons out of the latter before we can ask him to topple Tony Lazzeri, Joe Gordon, and my underrated childhood favorite, Willie Randolph. In fact, in a more cantankerous mood, I might be willing to argue that in context, Randolph’s 1980 season—.294/.427/.407, 30 stolen bases in 35 attempts, a league-leading 119 walks—was every bit as good as Cano’s 2010 .319/.381/.534, especially if you consider defense. …All votes Miguel Cairo will be discounted, sorry. We can have that discussion if you want. I’d rather have that discussion than the one about Damon. Damon was a fine Yankee, a four-win player for three of his four seasons, but he’s 37 now, and it’s time to let go.

As you know, I have a difficult time sympathizing when fans put sentimental feelings for a particular ballplayer ahead of the team winning. When the player is Derek Jeter, I understand why some wear blinders, even if I don’t agree with it. When it comes to a player like Damon, I find it even harder to identify. I turned 40 a few weeks ago, and in looking back over my life, there are a lot of times, decisions, people that I’d like to have back, things I’d like to say and do better than I did the first time around. I’m not ashamed to admit that sometimes I even miss people who it would probably be healthier for me to forget about, and dream on understandings that were unreachable when the actual events took place. I never dream on having some post-athletic ballplayer back on the main stage, and if I did, why dream small? Forget Johnny Damon, give me Joe DiMaggio. Give me back old loves, and first loves, and every misspoken word I ever said, and give me a chance to see Ted Williams swing the bat.

Sadly, all those things are impossible. They are as impossible as the idea of Johnny Damon’s return being worth something. We should, therefore, not waste time in fantasy, but live in the now, and the now is today’s loves, and today’s words, and accepting being 40 and not 20, or for those of you younger than myself, accepting being 21 and not 20, and for baseball players desiring youth, youth, youth, and more youth, because yesterday is gone.

So, you see, I don’t want to talk about Johnny Damon, because it would depress me. This is quite nearly the reason I don’t want to talk about Andy Pettitte either, although I don’t think he’s quite the same as Damon. He still has a role to play, though even if he chooses to come back, fragility associated with his nearing 40 might prevent him from playing it all that often. Thus: Sergio Mitre, one of the few things more depressing than being 40.

Before I dig a deeper well of pinstriped nihilism, allow me, on behalf of Cliff, Jay, Stephani, our pals at the YES Network, and myself, to wish you happy holidays and a safe and healthy new year. We will be back with more after the presents are unwrapped. Let me know what you got.