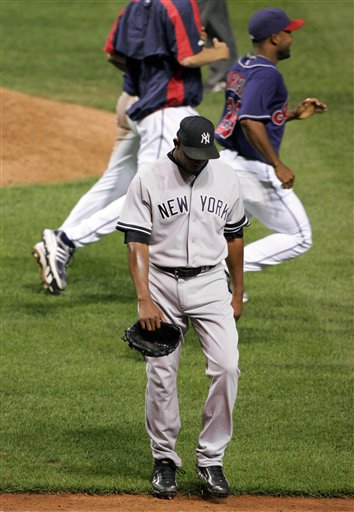 In his lone postseason appearance with the Yankees, Luis Vizcaino gave up the winning run in the infamous "midge" game in Cleveland.

Every time I set out to write about how quiet things have been around the Yankees, I come to realize things haven't actually been that quiet. After all, last week alone brought Cliff Lee's decision and the additions of free agents Russell Martin and Pedro Feliciano. Maybe that doesn't feel like much because the Yankees' primary issue entering this offseason, their rotation, remains unaddressed, but there are things happening around the Yankees all the time. In fact, the Yankees added 11 players in the last week (or at least made 11 additions official, even if a couple had actually occurred earlier in the month). In addition to Martin and Feliciano, the Yankees added an outfielder from the Red Sox to the 40-man roster and announced minor league contracts and Spring Training invites for eight other players. Here, then is a quick look at those new faces.

Jordan Parraz (OF) It's a bit of a cheat to say that Parraz came from the Red Sox. Though the Yankees did claim Parraz off waivers from Boston, he spent just 23 days as property of the Red Sox, who claimed him off waivers from the Royals in late November. Now a member of the Yankees 40-man roster, Parraz is a 26-year-old right fielder with limited power who has put up impressive on-base numbers in the minors thanks largely to the number of times he has been hit by a pitch. Parraz has been plunked 60 times in the last four seasons with a career-high of 19 in his first full season at Triple-A in 2010. A very athletic player with a fantastic throwing arm, Parraz is loosely comparable to Greg Golson as a player with more talent than on-field value. The differences being that Parraz is a year older and can't play center but has a far better walk-to-strikeout ratio. Indeed, assuming the Yankees add a veteran bench outfielder between now and Opening Day, Parraz should be Golson's primary competition as the organization's right-handed fifth outfielder option.

I've already written about three of the eight Spring Training invitees, with a look at massive lefty reliever Andy Sisco and converted center fielder Brian Anderson and some pessimism about perpetual rehab case Mark Prior. Here, then are the other five.

Doug Bernier (IF) A futility infielder who has spotted in the outfield, Bernier was a Yankee camper and farmhand in 2009. Here's what I wrote about him in my breakdown of that year's Spring Training attendees for Bronx Banter:

An undrafted free agent out of Oral Roberts University, Bernier spent his twenties working his way up the Rockies’ system and around the diamond. Primarily a shortstop, he’s played everywhere but catcher and pitcher and made his major league debut as a second baseman last June just before his 28th birthday (he was returned to Triple-A after two games). A weak and inconsistent hitter, Bernier’s only discernable offensive skill is a solid batting eye. He’s organizational fodder and a threat only to Ramiro Peña.

Bernier's two games for the 2008 Rockies remain his only major league exposure, and since I wrote the above, he has hit .208/.303/.279 in 499 Triple-A plate appearances in the Yankees' and Pirates' systems. I have no idea what the Yankees see in Bernier, who will be 31 in late June, but "organizational fodder" might be an over-sell at this point.

Gustavo Molina (C) The most interesting thing about this catching Molina is that he is not related to his famous namesakes. He is a strong defender, but even the worst Molina brother can out-hit Gustavo, who is a career .235/.295/.348 hitter in the minors and has managed just 45 major league at-bats across three seasons with four teams, the most recent being the Red Sox, for whom he went 1-for-7 without a walk or extra base hit in 2010. If he's this year's Chad Moeller, he's a downgrade.

Buddy Carlyle (RHP) This 33-year-old righty swing man is the definition of a journeyman. He now joins his eighth domestic organization coming off his second stint in Japan, that's 12 teams total, only three of which have given him the ball in the major leagues, and only one of which, the Braves in 2007 and 2008, gave him an extended opportunity in the bigs. Diagnosed with diabetes in early 2009, Carlyle's determination and endurance is admirable, but his pitching isn't.

Neal Cotts (LHP) Lefties get countless chances, and relievers who post sub-2.00 ERAs for World Series winning ballclubs do, as well. Cotts is both of those, but his 1.94 ERA for the 2005 White Sox is utterly unique in his pitching record, which is otherwise exclusively composed of ERAs over 4.00 and problematic walk and home-run rates. Cott's one great season was the result of luck on balls in play (.237 BABIP) and fly balls staying in the park (just 1.5 percent turning into homers against a league average of 12 percent). Since 2005, he has posted a 5.06 ERA, 1.59 WHIP, 4.2 BB/9, and an alarming 1.8 HR/9. He now joins the Yankees coming off Tommy John surgery and heading into his age-31 season with fellow LOOGYs Pedro Feliciano, Boone Logan already in place on the major league roster.

Luis Vizcaino (RHP) In May 2005, I wrote an extended piece about Joe Torre's history of overworking his most trusted bullpen arms, and in Torre's final season at the helm of the Yankees, it was Vizcaino who led the Yankees in both appearances (77) and relief innings (75 1/3). Those totals don't seem particularly high, but the former was a career high for the then-32-year-old righty, the latter was his second-highest total, and the season ended with Vizcaino complaining of shoulder soreness. The year after Vizcaino threw 81 1/3 innings for the Brewers, he posted a 6.39 ERA. After Vizcaino threw 75 1/3 innings for Torre, he posted a 5.28 ERA for the Rockies, then washed out of baseball after just 15 1/3 innings in 2009. Now 36, Vizcaino is attempting a comeback based on a strong showing in the Dominican Winter League, a performance lasting all of 11 2/3 innings. That is every bit as sketchy as it sounds.