The wonderful fellas over at the LoHud Yankees blog report the following comments by Brian Cashman on the rationale for making Russell Martin the starting catcher:

Cashman did not rule out the idea of Jesus Montero making the big league roster as a backup, but he stressed that having Martin lets the Yankees take a little extra time with both Montero and Austin Romine. In their organizational meetings about Martin, the Yankees looked back at the benefit of easing Jorge Posada into the job while Joe Girardi was still the regular catcher.

"(Posada’s transition) took a number of years and some growing pains," Cashman said. "Now we’re in a situation where, we have Russell Martin. He can take the reins as these kids take this next step at the Major League level, they can develop on their timeframe and now the timeframe is not forced on them because we need them at all costs." 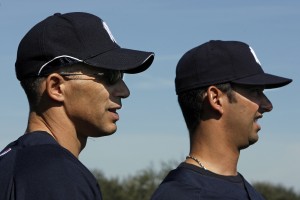 Joe Girardi and Jorge Posada: Portrait of a Man and His Anchor. (AP)

The Girardi-Posada story is always represented as a triumph of planning, but it was really a needlessly protracted process that hurt the Yankees more than it helped. Let’s backtrack for a moment. Sixty-three years ago, the Yankees had a terrific prospect named Yogi Berra. Berra could clearly hit, but had trouble with the defensive aspects of his game. Yankees manager Bucky Harris lacked confidence in him, and moreover allowed Berra to lose confidence in himself. When the Dodgers ran wild on Berra during the 1947 World Series, Harris yanked him out from behind the plate and stuck him in the outfield. Harris still wasn’t a believer in 1948, and kept jerking Berra between catching and the outfield. The sense that a major prospect was being mishandled was one of the reasons Harris was canned after the season and replaced with Casey Stengel. When Stengel came on, he was told that part of his job was to turn this kid into a catcher. The Yankees also brought on Bill Dickey as a coach to aid Stengel in that pursuit. In short, the Yankees told Stengel the opposite of what Cashman is saying above. "Forget the timeframe. The timeframe is forced. We’re forcing it."

Now let’s move forward to 1996. From 1992 to 1995, the Yankees’ primary catcher was Mike Stanley, an excellent hitter—he mashed at .285/.377/.504 in pinstripes—but not the greatest defensive player, particularly when it came to throwing. Incoming manager Joe Torre wanted a better glove behind the plate, and acting on a suggestion from bench coach Don Zimmer, recommended that Stanley be allowed to depart as a free agent and the Yankees acquire gloveman Girardi from the Rockies. The Yankees duly complied, sending reliever Mike DeJean west for the future Yankees manager.

The important thing to realize about Girardi is that at no time in his career was he even close to being a good hitter. Sure, he hit .290 twice, but the first time represented a Colorado-inflated batting average accompanied by no walks or power; the second time was more legitimate, but still didn’t have any oomph behind it.

Simultaneously, the Yankees had Jorge Posada in the minor leagues. However one defines "ready," the Yankees considered him close enough that they let him get his feet wet—he finished out a blowout as a defensive replacement for Jim Leyritz—in September of 1995. Posada had been in the Yankees system since 1991, and had been catching regularly for three years. He had never hit for a high batting average, but the walks and power that remain his trademark were already part of his game. Whatever the questions about his glove, the Yankees felt good enough about his abilities that they largely skipped him past Double-A, promoting him to Triple-A Columbus to start the 1994 season despite just seven games at the lower level the previous year.

With Girardi and Leyritz around, the Yankees had no place to put Posada. He headed back to Columbus for most of 1996, his age-24 season, and hit very well, batting .271/.405/.460 in 106 games. If you saw that line from a minor leaguer today, you’d want him. Now. The Yankees didn’t want him, not that year, anyway. However, that winter, Leyritz was dealt to the Angels for a couple of non-prospects and Posada had a job—as a reserve to a guy he could hit rings around.

At that time, it was often remarked that Girardi was "tutoring" Posada. That was all fine, for so long as any such claim was credible. However, given that Girardi tutored Posada until 1999, this notion was either completely bogus or Jorge was the world’s thickest student. He outhit Girardi straight away, batting .255/.348/.431 in 1,070 plate appearances to his master’s .261/.303/.354 in 941 plate appearances. That the job-share was as close to 50-50 as it was represents the profligate waste of Posada’s youth by the Yankees. On defense, Posada threw out 30 percent of attempted basestealers to Girardi’s 29 percent; throwing isn’t everything, but you can at least make an argument that Posada was holding his own. Overall, in those three seasons, Girardi was worth 2.9 wins above replacement, Posada 6.8.

The Yankees sacrificed a great deal of production and several wins to their hesitance to trust Posada. By the time they finally did, he was 28 years old, with the great rising to his peak years spent learning by sitting. This was emphatically not a success. Had Posada played more often, the Yankees might have had to deal with a few more passed balls and a few more stolen bases, and they would have had to live through a veteran staff’s complaining about a kid’s ability to call a game, which happens with almost every young catcher, regardless of time, place, or team. They would have gotten through the so-called apprenticeship in months instead of years.

Now the Yankees propose to do the same thing again to Jesus Montero, a catcher whose bat is clearly ready and whose glove may be years away. They are going to hold him back for a catcher whose last two seasons look suspiciously like something out of the Girardi catalogue. Despite Francisco Cervelli’s complete inability to hit for power, he and Posada combined to post a very productive line for the Yankees, hitting .264/.364/.409 with 13 home runs. This doesn’t sound like much, but this year the average major-league catcher hit only .249/.319/.381, so the Yankees were way ahead of the competition. Martin hit .249/.350/.330 over the last two seasons, and there is reason to believe that his American League numbers will not be quite as good, especially in the on-base department. One caveat: if Kevin Long can somehow get Martin back to the .288/.366/.454 level of his rookie and sophomore seasons, this whole column will be moot; if that happens, they should invent some kind of special citation for Long, perhaps the God of Hitting Coaches Award. Such a reinvention seems that unlikely.

I am not forgetting that Montero is a square peg. Defensively he is always going to be a project as a catcher—or maybe he will grow into the job in three years, when he will still be younger than many rookies. However, his bat is clearly ready, and he is far more likely to keep the position offensively above-average relative to the competition than Martin is. The Yankees are making a mistake in short-circuiting his bid for the position based on squeamishness about his glove. As with Yogi Berra, you teach, you suffer the pain—which is hopefully no worse than a few extra stolen bases—and in the end you have something special. The Posada route, the alternative that they seem to be taking, is punishing to the player and the team, sacrificing production for the security of a defensive benefit that is imaginary given just how badly the team is giving back runs on offense. Remember, even if Girardi saved the Yankees 10 runs a year on defense, a highly debatable proposition, he gave back 20 on offense (reverse this equation and you have the reason Derek Jeter has been an amazingly valuable player in his career despite his weak range).

Some will undoubtedly respond, "Hey, they won three rings with Girardi catching, so it must have been right." The factual part of that statement stops at the word "catching." It wasn’t right, or if it was right in 1996, it stopped being right thereafter. That they won anyway is no evidence of anything except that sometimes Providence rewards us despite our worst intentions.