You Really Don't Want to See the Medicals

Share All sharing options for: You Really Don't Want to See the Medicals 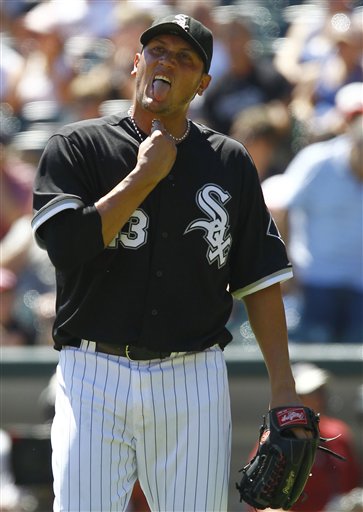 Freddy Garcia has seen balls leave the yard before, thanks (AP).

With the Yankees losing out on the Cliff Lee sweepstakes and still unsure of Andy Pettitte's return, they've turned their attention to filling out the back of their staff with, well, staff filler. According to ESPN New York's Andrew Marchand: "Yankees have asked for the medicals on Freddy Garcia."

My knee-jerk response via Twitter was that reading the free agent Garcia's medical files could take weeks. My private aside to friends was that the Yankees should ask for medication instead of medicals, because he's not the solution to what ails them. It isn't that the 6-foot-4 righty — nicknamed "The Chief" not because he's of Native American ancestry (he's Venezuelan) but because of his resemblance to a key character from One Flew Over the Cuckoo's Nest — is unremarkable, though he is. Last year, the 35-year-old Garcia went 12-6 in 28 starts for the White Sox, but with a 4.64 ERA, 1.3 homers per nine innings and just 5.1 strikeouts per nine. Even with a low walk rate, his peripherals don't suggest he was any better than that; his SIERA was 4.75, his FIP was 4.77, his xFIP was a 4.59, all of which is a pretty unanimous way of saying he was exactly what he looks like he was, no diamond in the rough. Still, in a rotation that suffered A.J. Burnett and Javier Vazquez combining for 344 innings of 5.28 ERA ball, that looks pretty good.

The problem is that Garcia's hardly a guarantee to maintain even that level, or to survive long enough to provide enough bulk innings to help round out the rotation. Garcia spent the 2007-2009 span coming and going from the disabled list, making a grand total of 23 starts with a 5.02 ERA for the Phillies, Tigers and White Sox while heading to and coming back from June 2007 labrum and rotator cuff surgery. His average fastball velocity last year was 87.8 MPH, 3.6 MPH lower than in 2005, when he helped the Sox win the World Series. He's about one notch away from being a batting practice pitcher, if he's not there already. Last year, righties hit .287/.329/.497 against him, lefties hit .271/.329/.454.

Furthermore, Garcia's a poor fit for Yankee Stadium, just as he was a poor fit for U.S. Cellular Field, a flyball-oriented pitcher who yielded 1.2 homers per nine during his days on the South Side. In New Yankee Stadium, Boston's Fenway Park, Baltimore's Camden Yards and Toronto's Rogers Centre—four of the five ballparks in the AL East, including the one he'd call be home—he's yielded 1.3 homers per nine in 128 career innings.

To be fair, Garcia probably wouldn't cost much; he made just $2.5 million for 2009 and 2010 combined. But he's just another damaged pitcher in the shallow end of a free agent pool full of them. Kris Benson, Jeremy Bonderman, Doug Davis, Justin Duchscherer, Jeff Francis, John Maine, Brad Penny, Ben Sheets, Jeff Suppan, Chien-Ming Wang, Brandon Webb, Chris Young... some of those guys were once outstanding pitchers, but all of them have serious medical issues which have have wrought havoc on their careers in recent years. Garcia might actually be among the more desirable ones in that he actually made it to the mound with some regularity last year and kept his ERA under 5.00. But that ain't saying much, and barring a bigger deal to obtain a starter at the cost of prospects or one of the regular outfielders, you can expect the Yankees to splash around among the mangled bodies until they find one who can lift his arms over his head for long enough to stuff him into a pinstriped jersey.

Martinizing
No sooner was the Russell Martin signing complete than the Yankees revealed that the catcher needs surgery to repair a torn meniscus, similar to what CC Sabathia and Jorge Posada have undergone this offseason. The Yankees went ahead with Martin's deal — which calls for a $4 million base salary, $200,000 less than the Dodgers offered and $1 million less than he sought prior to the non-tender deadline — knowing that he needed to go under the knife. "It's a three-week recovery period," said Brian Cashman, which ordinarily would mean that Martin should be plenty healed by the time pitchers and catchers report in mid-February, except that he's still recovering from his hip fracture as well, and has yet to resume baseball activities.

The other revealing thing Cashman said of Martin was this: "As long as he's healthy he will be the everyday catcher." While that's a relatively big if, given the previous paragraph, it would appear to indicate either that Jesus Montero will begin the year in the minors, or that Jorge Posada will get squeezed for playing time, or both. It's a more aggressive assumption than what Cliff made in his most recent post, and it's a bit unsettling. My reading of the situation from last month is that the Yankee front office is amid an ongoing internal debate breaking down along Tampa/New York lines regarding Montero's defensive ability or lack of same, with the Tampa-based Mark Newman, senior VP of baseball operations, the most vocal proponent of Montero's defense and the New York-based Cashman the most pessimistic. That's not to say that Cashman is wrong for making the move to sign Martin, just that if he's expected to play regularly it's going to be harder for the Yankees to tell just what they have in Montero.