Share All sharing options for: Jesus Is (Still) Coming 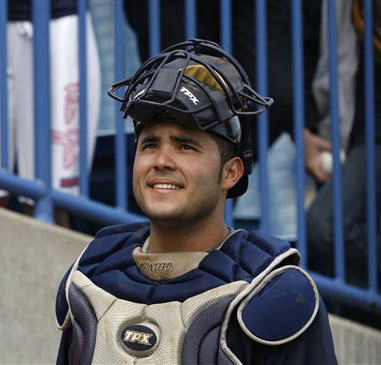 Jesus Montero will be the Yankees' starting catcher before the 2011 season is over. The addition of Russell Martin will only delay his arrival slightly. (AP)

I was going to wait until the official announcement and comment from Brian Cashman to weigh in on the Russell Martin signing, but with word that Martin passed his physical I figured I might as well go ahead now.

Put simply, there are two ways to look at the addition of Martin. The pessimistic view is that the Yankees, on the verge of breaking in a major new hitting talent in Jesus Montero, have blocked the kid with a sub-par veteran and with that veteran in place as the starting catcher, just might overreact to the Cliff Lee signing by trading Montero for a second-tier or worse pitcher who could just as easily go bust leaving them with little to show for one of the top prospects in all of baseball. The optimistic view, and the one I prefer to take for the time being, is that Martin is no more of an impediment to Montero than Bengie Molina was to Buster Posey this past season, and likely even less of one.

Though Martin was once considered one of the top catchers in the major leagues, one capable of hitting for a solid average with patience, power, speed on the bases, and excellent defense, he hasn't hit above .250 since 2008, hasn't slugged above .400 since 2007, and is coming off a fractured hip and a season in which he stole just six bases. Martin's last two seasons have been awful, as he has posted a combined .249/.350/.330 line. That's an 86 OPS+ compared to a 92 OPS+ for the average major league catcher over the last two seasons and something south of what the Yankees got from Francisco Cervelli last year (.271/.359/.335).

Still, Cervelli was, quite surprisingly, a poor receiver last year, and Martin's defense and patience are the two aspects of his game that have not diminished. Add in the fact that, as little power as Martin has shown of late, Cervelli, who has homered once in 423 major league plate appearances and has just nine taters in 1,251 professional plate appearances, has less, and even the diminished Martin seems like a clear up grade on Cervelli, who with Posada banished to designated hitter, was set to be Montero's caddy in the coming season.

Notice what I did there. I compared Martin not to Montero, but to Cervelli, because that's whose job I think he's taking. Yes, the Yankees are likely to open the season with Martin as their starting catcher backed up by Cervelli, but I don't think it will take much more than a hot month from Montero and anything less than a complete return to his 2007, Silver Slugger form from Martin for Montero to get the call pushing Cervelli back to Scranton and Martin to the bench.

In other words, Martin gives Montero a chance to heat up his bat and get a few reps behind the plate in Triple-A while letting the season get under way so that when Montero is later promoted and installed behind the plate there will be other things going on to keep the white hot focus of the Yankee fanbase and media from zeroing in on him and him alone at the start of the season. The fact of the matter is there's a much better chance of Montero hitting than Martin, so order will be restored to the Yankee universe in short order. I don't really see the harm, and if Montero doesn't hit and Martin does, well then you're going to want Martin behind the plate and Montero in Triple-A anyway, aren't you? Remember, Montero just turned 21 less than three weeks ago, it's not as if the Yankees are dragging their heels on his promotions.

Scout Frankie Piliere wrote a piece for MLB Fanhouse yesterday that viewed the Martin/Montero situation as a referendum on the Yankees' willingness to use the minor league system that he says is "just about as strong and as flush with talent in its minor league system as any team in the game" (the Royals being the organization most necessitating that "just about" qualifier). I'm not sure I completely agree.

I think the Yankees have already shown a certain willingness to break in young talent, be it Robinson Cano, Chien-Ming Wang, Phil Hughes, Brett Gardner, David Robertson, or even Joba Chamberlain, but that their patience with the pitchers is considerably less than their patience for the hitters, not that there have been that many of the latter, but the contrast between the performances of and resulting organizational patience shown Chamberlain and Gardner is informative, as is the fact that Cervelli and Ramiro Peña have persisted on the bench despite not doing all that much of anything in their brief major league careers.

That said, I completely agree with Piliere's larger point about the Yankees' strong system, aging major league roster and need to trust the former to fill in the cracks appearing in the latter, something Steve has been saying for a good long while now. In posting his preliminary list of the Yankees' top 20 prospects (headed by Montero, of course), former ESPN writer John Sickels wrote, "The pitching is quite rich; I count eight guys with the ability to hold rotation spots at the major league level, including a couple of potential anchors, and there are more arms behind them." Indeed, numbers three through seven on Sickels' list are pitchers whom he grades as B- prospects or higher. They are, in order: Dellin Betances, Manny Banuelos, Hector Noesi, Andrew Brackman, and Ivan Nova, all of whom pitched at Double-A or above this past season. Of Nova, Sickels writes, "looks like a competent fourth starter to me," and if Andy Pettitte returns the Yankees will only need him to be the fifth man in their rotation. Of Montero, Sickels writes, "No one will care much about the glove in five years."

Which brings me back to Piliere, who has this to say about Montero's work behind the dish:

Montero is at a stage where he can handle himself as a big-league catcher.

At his size, he's going to have to put in additional work to stay flexible and athletic, and his defense will always be something that requires extra attention. But the idea of him being simply unable to catch at the next level is one that is still vastly overblown. . . .

I've had the pleasure of scouting Montero at each level of the minor-league ladder during his development, and the worries about his defense aren't unwarranted. But, they were much more warranted two years ago, and even more so the year before. As he's matured, especially physically, his defense has improved, not declined as some predicted. With Triple-A Scranton/Wilkes-Barre in 2010, I still saw a lot of inconsistencies in Montero's game behind the plate, but it was nothing that I don't see from time to time from mediocre defensive catchers at the major league level.

The bottom line is that there is a big difference between having defensive deficiencies and not being able to play the position at all. Montero is ready to play catcher in 2011, and the more I've seen from him, the more confident I've become of that fact. He'll have his moments that frustrate you back there, but there are no deficiencies that are glaring enough to warrant moving him off the position. His potential to hit 35 home runs a year should more than make up for that.

(Thirty-five homers, incidentally, would break the current team record for home runs by a catcher, currently held by Posada and Yogi Berra, by five.)

The Yankees themselves have never expressed concern over Montero's defense and seem unlikely to trade Montero in part because the pitchers it might be worth trading Montero for are as untouchable to their organizations as Montero should be to the Yankees. Montero will be the Yankees starting catcher, likely before the 2011 season is over, and quite possibly before the All-Star break. Russell Nathan Coltrane Jeanson Martin simply gives the Yankees a high-upside place holder on a one-year contract (for $4 million with another $1.4 million due if he catches 120 games) and Montero a bit of breathing room. If Montero hits right away and Martin struggles, the signing could cost the Yankees some crucial wins in the extremely competitive American League East, but it shouldn't cost them any meaningful portion of Montero's career in the long run.