I very much wanted to write this about Felix Hernandez yesterday, I even discussed it with Cliff Corcoran: all the fannish speculation about the Yankees turning Cliff Lee’s demurral into the reigning Cy Young award-winner is right up there with Hitler sitting in his bunker dreaming of the war being won by the V-2 rocket and other secret weapons while just outside the Russians rampaged through the streets. It’s delusional. The Yankees have lost this round of "Pitching Ace Sweepstakes." As I suggested yesterday, given the inevitable buyer’s remorse that would have accompanied signing a 32-year-old to a seven-year deal, in this case losing may be the same as winning. Still, despite escaping Lee’s old age, despite their many pitching prospects, some feel that they must do something, even if something is limited to fantasies about stealing the game’s best young pitcher at gunpoint. 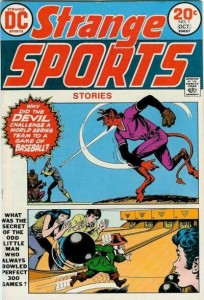 Even if they include THIS guy in the deal, Felix Hernandez isn't going to be a Yankee. (DC Comics via GCD)

The Yankees have many advantages given the way they can leverage their financial resources, but that doesn’t mean that every other roster in baseball becomes their Costco. Brian Cashman can’t just walk into the baseball warehouse store and say, "Yes, I’ll have that box of Albert Pujols, and that case of Tim Lincecum, oh, and also that 50-pound tub of Crisco." He can’t look at other teams like they were eBay and say, "Hmm, I can bid on Miguel Cabrera or just suck it up and pay the ‘Buy it Now’ price." The other teams have to have a valid need to sell. In some cases, the argument for keeping a player is stronger than the one for trading him, even if the team that is doing the buying offers them an entire farm system worth of riches, plus major leaguers, plus cash.

Felix Hernandez might be one of those players, a face-of-the-franchise type whose loss would outweigh any possible return the team might get. Terry Pluto wrote a book called The Curse of Rocky Colavito, which proceeds from the premise that the Indians dealt this terrific 25-year-old slugger and instantly lost credibility with their fans. They also got a poor return on a wonderful young talent, something which helped run a team that had been a solid contender for more than a decade, a two-time pennant-winner during that period, and turn it into the doormat of the American League for over 30 years.. That was beside the point, though, because the move was so alienating that fewer and fewer people cared.

In short, dealing Colavito in 1959 provoked the kind of reaction that the Yankees might have gotten had they dealt Derek Jeter in 1999. Even if they had received equal value, it’s not something the fans would have wanted, and they would have been correctly skeptical had the team tried to justify it on the basis of need. King Felix is that to the Mariners.

One reason why fans would be so quick to reject a trade, as they did the Colavito trade, is because it would set off their—pardon the expression, family site—horsebleep meter. In 2010, Hernandez was one of the top 10 players in the game. Here is how Baseball Prospectus ranked the top 10 according to wins above replacement:

Unless the Mariners were to receive another player or players in the top 10 or thereabouts, it is impossible to claim that the team is bettering itself, because once you’re talking about the handful of best players in baseball, there is nowhere to go by trading but down. Making such a deal all the more blatantly misguided is that Hernandez is so young. Further, there is no prospect or even prospects that you could acquire, including the entirety of the top-rated Royals’ system, because although Mike Moustakas, John Lamb, Eric Hosmer, Wil Myers, and the rest of the guys are an amazing collection of prospects, not one of them is a sure thing, whereas Hernandez is the sure thing. He’s already an established ace. One of those Royals might be as valuable as him one day, but likely not. The same goes for Jesus Montero, Manny Banuelos, et al.

"No prob," you say. "Well even things up by throwing in Joba and Brett Gardner and, um, Ramiro Pena." First: bit deal, a middle reliever and a singles hitter who can’t stay out of the infirmary. Second: the Mariners fans don’t care. The season-ticket base isn’t going to care. They are not going to re-up their packages because the Mariners got a little deeper. They want them to be deeper and they want to see Felix Hernandez.

Now, Fausto Carmona on the other hand, the Indians won’t necessarily miss him, no Rocky Colavito he. But then, that’s the whole reason why he’s available in the first place. He’s not a bad pitcher, but as my grandmother used to say, never buy a sinkerballer when your shortstop has the range of a fire hydrant.

My BP colleague Marc Normandin has speculated as to the Yankees’ next move, and I have a new tune up at Casual Observer Music.