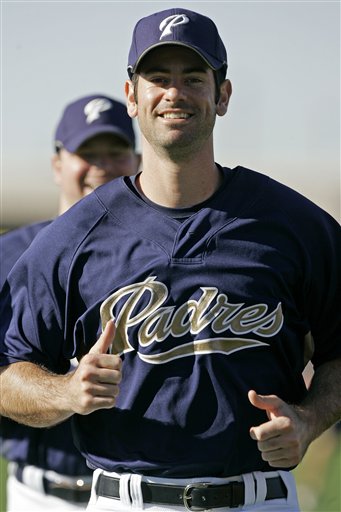 The Mark Prior the Yankees have signed isn't former Cubs ace, it's the one that couldn't even get into a minor league game with the Padres. (AP)

The Yankees may have lost the Cliff Lee sweepstakes, but they did sign a former 18-game winner on Tuesday. Of course, that former 18-game winner was Mark Prior, who hasn't thrown a major league pitch since 2006 due to chronic arm problems and has pitched just one inning for an affiliated minor league team since then. My first reaction was that the Yankees might as well have signed Red Ruffing. My second was to wonder how many pitchers had gone four years between major league appearances, as Prior will have done should he actually succeed in his comeback attempt with the Yankees.

With considerable research help from Jay, I assembled a list of 24 men who went four or more years between major league appearances, none of whom is a particularly inspiring example. Before start breaking down that list, it should be noted that neither Jay nor I could figure out a good way to do a definitive search for four-plus-year layoffs and that most of these names came from discussion threads concerned with finding the longest appearance gaps in major league history, so there's a strong likelihood that the list is incomplete. If you know of additional examples, please add them in comments.

Looking for pitchers who accomplished what Prior is attempting, can promptly eliminate 14 of those 24 men because they pitched in the minor leagues between major league stints with no more than a three-year gap in their minor league record (of those 14, only three had a minor league gap as large as three years, one of which was caused by service in World War II). We can then eliminate former Yankee Paul Schreiber, who went a stunning 21 years between major league appearances and 13 years between his last minor league appearance and his major league return. Schreiber gets the boot because his return came when he was the Yankees' 42-year-old batting practice pitcher and was pressed into duty for just two games in 1945 while the Yankee roster was still depleted by the war.

Now we're down to seven men, two of whom pitched so long ago that I can't be sure their minor league records aren't missing data or that they didn't pitch in some high-level league that didn't leave behind playing records. Those two were Rudy Sommers (who returned to the majors in 1926 after 11 years away and, according to the record, six years after his last minor league appearance) and Jack McFetridge, who returned in 1903 12 years after his last recorded professional appearance.

That leaves just five men whom we can use as proper models for Prior: Jim Bouton, Danny Boone, Dave Stieb, Jose Rijo, and Salomon Torres. Let's take them in chronological order:

Former Yankee phenom Jim Bouton had already blown out his arm and reinvented himself as a knuckleballing reliever when he finally pitched his way out of baseball at age 31 in 1970, after which the fallout from his classic memoir of the 1969 season, Ball Four, effectively blacklisted him from the game. He made five starts for the independent low-A Portland Mavericks in 1975, then spent 1977 tuning up with the White Sox Double-A team (courtesy the always-game Bill Veeck), in the Mexican League, and back with the Mavericks before finally returning to the major leagues for five September starts with Ted Turner's Braves at age 39 in1978.

Little lefty reliever Danny Boone spent four years out of baseball, but caught on with the short-lived Senior Professional Baseball Association in year four at the ripe old age of 35. There he tried out a knuckleball that got him signed by the Orioles with whom he made one start and three relief appearances in 1990, seven years after his last major league appearance. Those 9 2/3 innings comprised the whole of his major league comeback.

One of the best pitchers of the 1980s, Dave Stieb retired due to back problems after making four starts with the White Sox in 1993, but staged a comeback with his original team, the Toronto Blue Jays, in 1998 at age 40. Stieb posted a 4.83 ERA in three starts and 16 relief appearances before retiring again for good.

Former Yankee farmhand Jose Rijo posted a 2.63 ERA in his first seven seasons with the Reds, but elbow problems stopped his career cold in July 1995. Rijo was unable to pitch for five years, but returned as a reliever in 2001, after becoming eligible for the Hall of Fame and actually receiving a vote that January. Rijo made 13 relief appearances for the Reds in 2001 at age 36, then pitched 77 innings for them as a swing man in 2002, but he wasn't the same pitcher. After posting a 5.14 ERA in those 77 frames, he retired for good.

Most recently, Salomon Torres, another small relief pitcher, albeit a right-handed one, went four years without appearing in a major or minor league game. Having effectively washed out of baseball at age 25, Torres retired to devote himself to his religion (he's a devout Jehovah's Witness) and to coach in the minor leagues. He made a pair of appearances in Korea in year four, then returned to the majors with the Pirates at age 30 in 2002 and enjoyed a solid six-year run thereafter in which he posted a 3.66 ERA for the Pirates and Brewers while picking up 57 saves before retiring again for good at the age of 36 despite coming off a strong season as Milwaukee's closer.

So just to be clear, the only one of the five men above whose absence from the majors was due to arm problems was Rijo, and though he was good enough to get a random Hall of Fame vote before his elbow acted up, he wasn't any good when he returned. One could also bring current Reds reliever Mike Lincoln into this conversation. Lincoln was out of baseball entirely for three years due to back-to-back Tommy John surgeries. He returned with 70 1/3 innings of league-average relief for the Reds in 2008 at age 33, but has posted a 7.80 ERA in just 42 2/3 innings over the last two seasons and suffered a season-ending oblique injury in May of this past season.

Prior, who signed a minor league deal with the Yankees that would pay him $750,000 if he returned to the majors, with incentives that could double his money, is attempting to come back from a four year absence due to not to the elbow issues that plagued Rijo and Lincoln, but to a trio of shoulder surgeries. Based on the above, such a comeback is completely unprecedented and about as likely to happen as a comeback by Ruffing, who has been dead nearly a quarter century.