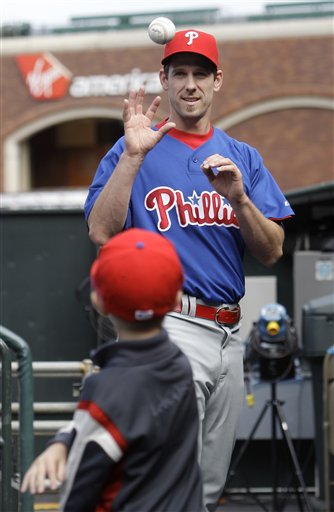 Cliff Lee shocked the baseball world by opting to return to the Phillies instead of the Yankees or Rangers (AP).

Over the past few days, as the Cliff Lee chase grew quiet on the eastern front, word of a third "mystery team" besides the Yanks and Rangers bidding on the lefty was generally treated as a transparent ploy by the pitcher's agent to get the two teams to raise their prices. As it turns out, there was a third team: the Phillies, whom Lee helped to the NL pennant after being acquired in the second half of 2009.

Apparently Lee liked his time in the city of Brotherly Love more than the thought of returning to Texas, because he shocked the baseball world by spurning both the Rangers' and Yankees' offers — the last of which from the latter was reportedly six years, $132 million plus a $16 million player option for the final year — to return to Philadelphia. Terms are believed to be five years, $120 million plus a vesting option. As he did with Roy Halladay, Phillies general manager Ruben Amaro Jr. managed to convince one of the game's top pitchers to leave tens of millions of dollars on the table (see, kids? sometimes it's not about the money), though not as much money as was initially believed. It's worth noting that the deal was carefully tailored so that Lee wound up taking the deal with the highest guaranteed average annual value ($24 million), thereby appeasing his union brethren and giving agent Darek Brauneker bragging rights on having secured the second-highest such deal for a pitcher behind only Roger Clemens. The move gives the Phillies an incredible front four of Halladay, Lee, Cole Hamels and Roy Oswalt in their rotation, and guarantees they'll go into 2011 as the favorites to win their third NL pennant in four years. Never mind the fact that it was just shy of a year ago that the Phils decided they couldn't even afford Lee's measly $9 million 2010 salary after adding Halladay, and traded him to the Mariners for a lesser package of prospects than they surrendered when they signed him.

Losing out on Lee throws a wrench into the Yankees' 2011 plans, but this is hardly the end of the world. As my fellow Bible Study Groupers and I have counseled for the past six weeks or more, there are many reasons to be wary of going seven years on any pitcher, let alone Cliff Lee. While Brian Cashman's next move isn't nearly as obvious as chasing down the pitcher who was the difference-maker in the AL playoffs, nobody's going to weep for the team with the $200 million-plus payroll as they try to scrape together a few ideas for Plan B. With the free agent market for starting pitchers reduced to Carl Pavano and a surgical ward, that likely means a trade for a mid-rotation inning eater — the New York Post's Joel Sherman cited Gavin Floyd, Edwin Jackson and Ricky Nolasco as possible targets — along with a redoubled effort to re-sign Andy Pettitte, a whole lot of hoping that new pitching coach Larry Rothschild can guide Phil Hughes to the next level and help A.J. Burnett recover his form. There's always the possibility of a mid-summer upgrade as well.

The Yankees have tremendous assets as well as numerous liabilities, and while Lee certainly would have been the former at least in the near term, eventually that $150 million-plus contract would have turned him into the latter unless he was able to maintain his pinpoint control into his late thirties. So weep not for Cashman or for Hal Steinbrenner, because they'll make do. Those who have studied the issue say that the last time the Yankees lost out on a free agent they so coveted, it was 1992, when Greg Maddux spurned them to sign with the Braves. That was 18 years and five championships ago. The Yanks missed out on a Hall of Famer, but they survived that loss and even flourished. They'll survive this, too.

At least we can envision the look on Nolan Ryan's face when he found out, eh?