Relief from the Waiting Game

Share All sharing options for: Relief from the Waiting Game 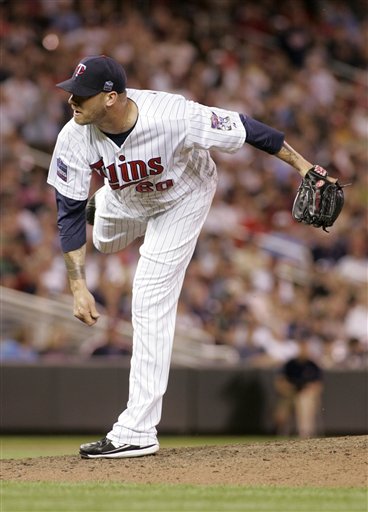 Brian Cashman needs to catch up on his Christmas shopping. (AP)

The news around the Yankees hasn't really been that slow, it's just been dull. Last week saw the Derek Jeter and Mariano Rivera contracts become official with a press conference in which Jeter did little to hide his displeasure about how his negotiations were handled. A couple days later, the Yankees lost two players and added two others via the Rule 5 draft. Along the way, they upped their offer to Cliff Lee to something resembling CC Sabathia's record pitching contract of $161 million over seven years. That last is what gave the weekend the feel of inaction. Lee is taking his time in weighing the offers he has received from the Yankees, Rangers, Angels, and others, and there's a sense that he's gumming up the works, keeping those teams from making other moves until they know if they're on the hook for (another) one of the ten biggest contracts in baseball and keeping the other starters on the market, most of all Carl Pavano, who is the next best pitcher out there, from signing.

Brian Cashman has said, in essence, that Lee has received the Yankees final offer. They'll meet with him if he requests it, but in terms of negotiations, they're done. Given that, I thought I'd suggest something for Cashman to do to kill time while waiting for an answer: sign a relief pitcher. At the start of the offseason, Cashman and I agreed that the Yankee pen needed some reinforcement, and Alfredo Aceves's recent broken collarbone and subsequent non-tender has only further thinned out the relief corps. The free agent market is slowly thinning out, and with Rivera already resigned, the Yankees aren't going to be offering a reliever a contract that would be effected by Lee's, so why not get to it before they're forced to pay for Kerry Wood's coming correction.

In light of the recent non-tenders, here's what the Yankee bullpen looks like at the moment:

Fish is a Rule 5 pick. He has faced four batters above Double-A in his career and posted an 8.93 ERA at Double-A last year. I've left fellow Rule 5'er Dan Turpen off as he has no chance to stick. Without Lee and Andy Pettitte, Ivan Nova is needed in the rotation. Righty Ryan Pope and lefty Steve Garrison, both of who both started and relieved in 2010, are also on the 40-man roster but Garrison has the only Triple-A experience in that pair, posting an 8.87 ERA in his only five starts there last year.

That bullpen might suffice, but it might also completely collapse, and either way, you know the Yankees aren't going to go into the season without reinforcements. Earlier this offseason, I took a look at the available free agents and identified the Yankees top left-handed and right-handed options. The end result was this list of targets:

Since then both Francisco and Downs were indeed offered arbitration by their former teams. Francisco accepted and will thus remain a Ranger. Downs declined but has since signed with the Angels, who also inked Takahashi. Putz signed with the Diamondbacks, where he'll be able to close once again. Oh, and Affeldt signed an extention with the Giants in March that I somehow totally missed [wipes egg off face]. That reduces the above list to two men, Jon Rauch and Kevin Gregg, and Gregg has reportedly been offered a two-year deal worth as much as $10 million by the Orioles, who could possibly make him their closer pushing the re-signed Koji Uehara, another compelling option now off the market, into a set-up role. If so, the chance to close would likely trump whatever the Yankees could offer. That leaves the righty Rauch as the last man on my wishlist.

Cashman said early this offseason that he wanted to add a left-hander to the bullpen, but the only options there are a gaggle of LOOGY's (Pedro Feliciano, J.C. Romero, Joe Beimel, Will Ohman, Ron Mahay, Randy Choate, and Randy Flores) who are only viable for miniscule matchup stints measured in batters. Brian Fuentes is still out there, but he will likely hold out for a closer job and is reportedly looking for a salary of up to $8 million per season, another indication that he sees himself in that role.

Me, I'm asking Santa for Jon Rauch. His neck tattoo will annoy the hell out of me and draw constant complaints from Jay and my wife, but I'd rather have the best pitcher available than a left-handed one, and in my opinion, after you eliminate the guys looking to land closer jobs (of which, admittedly, Rauch could prove to be one), Rauch is the man. Given that there's been very little heat on him since the Twins declined to offer him arbitration, now seems like the perfect time to wrap up this particular present. Best of all, he can double as the tree.

Note: the above has been updated to reflect my embarrassing mistake regarding Jeremy Affeldt's availability