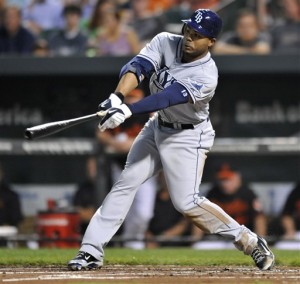 With his seven-year contract, Carl Crawford could become a burden for the Red Sox (AP).

Remember that dinner between Brian Cashman, Carl Crawford and his agent? Some folks got up in a lather about the Yankees somehow being able to fit the speedster onto the Yankee payroll along with Cliff Lee. Others saw him as a potential Plan B in case their pursuit of the southpaw fell through. YESman Jack Curry was among those reporting that the dinner was a bluff which was designed to create the illusion of interest. "The Yankees never made an offer to Crawford, and Cashman conceded that the Yankees weren’t interested in signing him," writes Curry.

This is the way the game is played during the winter, particularly when it comes to the big-spending Yankees and Red Sox. As I noted, just by talking to Crawford, the Yankees probably raised his price tag an extra million dollars or so per year. Consider that the Red Sox signed Crawford for seven years and $142 million, more than $2 million per year above what the Nationals shockingly paid for Jayson Werth, and one year longer and more than $2 million per year above the Angels' six year, $108 million offer for the speedy left fielder.

Consider also that Red Sox GM Theo Epstein stuck his nose into the Mariano Rivera situation, offering a two-year deal at the same money Rivera was seeking from the Yankees, a move which had no chance of convincing the great closer to head north but which forced Cashman to guarantee Rivera's second year instead of selling it as some kind of option. The Sox move will affect the Yankees in 2012 if Rivera should decline, but the Yanks' move will likely affect Boston for a whole lot longer.

While the Yankees of the Cashman era have given out a good number of deals of longer than five years — Derek Jeter, Alex Rodriguez, Mark Teixeira, CC Sabathia, Jason Giambi and Mike Mussina — the Red Sox under Epstein have been much less reluctant to do so, going longer only for Daisuke Matsuzaka and Dustin Pedroia, the latter to buy out his pre-free agency years while taking advantage of his youth. Yes, Cashman's been on the job five years longer and yes, the Yankees have the top payroll in the game every year, but the Sox have also been much more conservative with their longer-term deals, particularly for position players. Until now. With Crawford and the not-yet-officially-extended Adrian Gonzalez, they're going longer than in any deal since the Dan Duquette administration gave Manny Ramirez an eight-year deal back in the winter of 2000-2001.

Like Steve, offhandedly I don't find the Crawford deal a particularly smart one, because the line between him as a useful player and as a drag is a fine one; if he's hurt and his batting average on balls in play drops, as it did in 2008 (when he hit .273/.319/.400 overall), he's a burden, and I wonder how fast he's going to be at 35 years old. There are fewer players I would sign to a seven-year deal from here to 2017 at anything short of gunpoint than there are fingers on the my hand. Albert Pujols, Evan Longoria... I run out of ideas before I run out of digits, but neither Crawford nor Werth make the cut.

Which isn't to say Crawford's a bad player, just that he's got his plusses and minuses. Excluding his first two seasons at ages 20 and 21 (2002 and 2003), when the Devil Rays played him because he was a healthy alternative to watching the team lose 100 games with a Jason Tyner bobblehead out in left field, he's hit .301/.344/.461 for his career, which isn't tremendous when you consider that AL left fielders as a group hit .273/.338/.430 last year, with very similar numbers in previous years despite higher scoring level. Crawford's not a particularly disciplined hitter; he's never come close to walking once for every 10 plate appearances, and his highest on-base percentage is just .364, and that's with a .305 batting average. Nor is he a particularly powerful one; he's never slugged .500, and his slugging percentage is propped up by almost as many triples as homers during that span (90 and 97). Triples are generally an indication of speed, not power, and Baseball Prospectus' PECOTA projection system discounts them considerably in its forecasts. While he's played in a pitcher-friendly park, the fact that it's a turf park has played to his advantage; he's hit .305/.345/.460 at home, .289/.330/.430 on the road.

That said, Crawford has been consistently valuable, topping 4.0 WARP six times in that seven-season span, averaging 4.8, peaking at 7.1 this past year and bottoming out at 3.5 in 2008, when he missed one-third of the season due to a finger injury. A good bit of his value comes from beyond his bat. Baseball Prospectus' metrics peg him as worth about five to seven runs per year in terms of his baserunning, and our defensive metrics peg him as a legitimate plus defender in left field, nearly 12 runs above per year during that stretch, and the most valuable defensive left fielder according to a newer version of FRAA that we're unveiling, but playing Fenway's shallow left field with its imposing Green Monster will neutralize some of that defensive value.

On the other hand, Crawford will reap some benefits from hitting in Fenway Park, particularly in the near-term. As David Pinto noted while studying Crawford's spray chart, while he's not likely to be pulling the ball past the Pesky Pole in right field, he could put a lot of balls into the odd triangle just to the right of center field, hits that not only could be triples but might become inside-the-park homers for a man with his speed. As BP colleague Marc Normandin, writing over at Red Sox Beacon, notes:

Crawford is going to lose some batting average when his infield hits drop. Let’s say turf grants him an extra 10 infield hits a year, so now he will be a hitter who averages 170-175 hits a year instead of 180-185. That is a bit of a problem for someone who walks as little as Crawford and is dependent on their batting average, but remember how the triangle and right field are going to treat Crawford, and that the Green Monster out in left is going to turn some fly outs into doubles. He may lose some batting average, but the value of many of his hits – doubles turning into triples in the triangle, fly outs or doubles turning into homers at Fenway – will increase, meaning his slugging percentages will be higher.

Crawford is not going to be unproductive at Fenway because he no longer can lean on turf. He’s just going to be different.

There's evidence to suggest that players with speed skills age a bit better than those without, but the margin for error is still small when it comes to Crawford. Work by another BP colleague, Matt Swartz, suggests that each Win Above Replacement Player a player produces is worth $5 million dollars in current terms; a player making $20 million a year in 2010 would be a break-even proposition if he were producing 4.0 WARP. To project into the future you have to adjust for inflation; if we assume a three percent rate of salary inflation, 1.0 WARP in 2017 would be worth $6.2 million, while at five percent, it's about $7 million.

We don't know what the individual year breakdowns of Crawford's deal are, but the bet that the Red Sox are making, essentially, is that he maintains that level of around 4.0 WARP per year and doesn't slide below 3.0 WARP, when he'll be a drag on payroll. When you consider he's had only two years above 5.0 WARP — the last two, when he's averaged 6.3 WARP — and that there's likely to be more variance in his performance around that 4.8-WARP average than he's shown thus far, you can see that unless he particularly advances his game, there aren't likely to be many years that the Red Sox get a real bargain.

The addition of Crawford and Gonzalez to the Red Sox lineup is quite likely to be a boon in 2011, but the $300 million they may add to the payroll to keep both for the next seven or eight years has the potential to be a long-term liability. In that sense, they're closing the gap on the Yankees as well. In the long run, those burdensome contracts are more likely to bring the Red Sox back to the pack than to push them out in front of it.