Share All sharing options for: The Russell Martin Blues

According to the estimable George King of the New York Post, the Yankees have told Russell Martin they want him to be the starting catcher. I feel like singing a Robert Johnson song.

And my road seem dark as night

I got Russell Martin in my passway

And my road seem dark as night

I have pains in my hearts

They have taken my appetite

I realize this has not exactly been the cheeriest Yankees blog in the world lately, but when the Yankees want to hold back a 20-year-old with the power of Zeus for Jason Kendall II, it’s hard not to feel ambivalent at best. 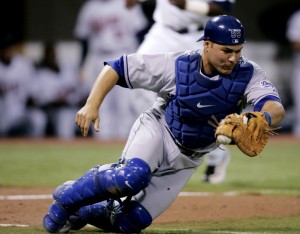 Note I said "ambivalent," not "hostile." This is not a black-and-white issue. After hitting .288/.366/.454 in his first two major-league seasons, Martin’s bat suffered a premature death for reasons that several autopsies could not identify. Over the last three seasons, covering ages 25 to 27, he hit just .261/.364/.356. In his previous piece on Martin, Jay Jaffe named one possible reason, that Martin, as Alicia Bridges sang, he loves the nightlife, he’s got to boogie, on the disco ‘round, oh yeah. Whatever the cause, his offensive contribution is pretty much down to his walks, and since he picked up some of those while batting eighth in the NL, I figure he’s in for about a 15 percent reduction in ball fours upon translation to the American League. In short, failing a miraculous return to 2007, he would outhit Francisco Cervelli, but not much more than that. That’s a low bar for your starting catcher.

Defensively, Martin is a better thrower than Jorge Posada ever was, and possibly better than Cervelli given how poorly the latter threw last year. His career shoot-‘em rate is about 30 percent. However, he does make some errors. His real career fielding percentage—his percentage with putouts from catching strikeouts removed—is .919, which would have been in the lower third of catchers this year. That said, both Posada and Cervelli were around .850.

It seems like Martin is an overreaction to the Carl Crawford signing, the Yankees wanting to be better prepared to take on a Boston team that will be able to run a ton with Carl Crawford and Jacoby Ellsbury. However, the damage done by those stolen bases isn’t necessarily huge—Crawford and Ellsbury have to get on base first, with no one ahead of them, and then go—and please, let them go, let them take the bats from the hands of David Ortiz and Kevin Youkilis.

The Red Sox are not a fast team even with Crawford and a presumably healthy Ellsbury around. They are in no way going to turn into the Rays of the last few years. Over the last three seasons, the Rays stole 51 bases against the Yankees against 13 caught stealing. This year, the Yankees allowed the Rays to go 21-1 on steals and yet were 8-10 against them. The games were close, with the Yankees outscored just 90-97, so perhaps the stolen bases were key. However, during the three years, the Yankees were 30-24 overall against a very good team, so if the stolen bases hurt, they still didn’t prevent the Yankees form having a winning record. You out-pitch the other guy, you hit more home runs, allowing the odd stolen base isn’t going to kill you. Heck, the Yankees went to the postseason this year and they couldn’t throw out anyone.

The cost of defending against those stolen bases is that Montero heads back to Scranton when his bat is clearly ready. It means giving up a lot of runs. If Montero could put 80 runs on the board with his bat and Martin only 60 or so, that’s about two wins gone right there. That’s 20 runs gone to combat a disadvantage on the bases that probably adds up to no more than 10 runs a year. It’s not wise, and it’s certainly not necessary.

As I’ve been writing this post, it has been reported that Martin is leaning towards the Red Sox. This makes sense—if you can’t beat out Jarrod Saltalamacchia for a job, you might as well quit. If this turns out to be the case, it would be a good thing, another example of saving the Yankees from their own nerves about young players as well as those nightmarish visions of Red Sox running like rabbits around the bases. And maybe they will sometimes. But if Montero can hit 20 home runs, it won’t matter all that much.