They All Got Away Except the Ones We Really Wanted

Share All sharing options for: They All Got Away Except the Ones We Really Wanted 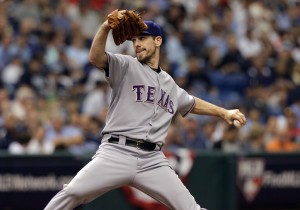 Last year, the Mets spent the first year of the winter—and I know that winter is part of a year, not the other way around, but it felt that way—chasing Bengie Molina. First, Molina wasn’t Mike Piazza, he was a guy coming off of a .285 on-base percentage. Second, they not only chased this 35-year-old on the verge of retirement around the table like some lecherous over-aged executive trying to catch a pretty young secretary, but they suffered the indignity of being turned down by this nonentity. Then, as an apology to their fans for not signing this future Hall of Who? member, they picked up Jason Bay as a kind of afterthought, a "sorry I forgot your birthday so I got you this engraved pen set from that kiosk place at the mall" kind of gift. Having apparently spent all of their winter’s needs on nothing, the Mets got nothing but a player who didn’t really fit their needs, and they ended up disappointing their fans for the umptyteenth year in a row.

Cliff Lee isn’t Bengie Molina. He’s several orders of magnitude greater, more significant, more impactful, than Bengie Molina. Yet, the Yankees offseason has that Bengie Molina feel to it. The lineup that limped through September has been changed little, except for the entirely hypothetical addition of Montero, which will depend on his going 10-for-30 in spring training instead of 5-for-30 and throwing out two of ten runners instead of one. Even if Montero gets the job, the combination of likely light-hitting backup action and Posada’s non-Ortiz-y bat might not make for a huge change in the offense’s overall outlook. The bullpen is what it was. Sergio Mitre is back, which I refuse to classify as a "move." It’s more of a reflex action, a spasmodic grasping at a mirage. 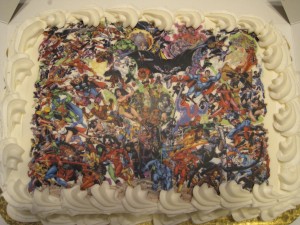 My birthday cake was fun 'n' geeky, but not necessarily nutritious.

The starting rotation, with or without Lee, will still have A.J. Burnett in it. It will have Phil Hughes and his post-May 5.00 ERA in it. It might have Andy Pettitte in it, which isn’t a bad thing necessarily, but it doesn’t help the team get any younger—a need that has been lost in the rush to give a six- or seven-year contract to a control pitcher with a balky back. Call me a cynical curmudgeon if you wish, but I find it hard to get excited by this. You know the old, annoying dieter’s saying, "A minute on the lips, a lifetime on the hips?" I love vanilla cake. I just had a birthday, as Cliff was nice enough to point out last week, and my wife got me a terrific vanilla cake, with buttercream frosting and a great George Perez illustration on it. I’ve lost a lot of weight lately, and darn it, as much as I loved that cake, I felt bad when I ate it, and I ate a lot of it. The initial taste of it was great, and I was ready to let it go after that, but I would be in my office working and the thought would come into the back of my mind like a tickle that there was still more of it down in the fridge… I was getting into diminishing returns with every bite, but it was hard to stop. And it’s not like you can "diet" by saying, "Well, I had some cake so I’ll skip lunch," because (A) calorically speaking, you can skip pretty much everything and not make up for that slice, and (B) you need actual nutrients in your life, not just fat. Cliff Lee is like cake. He can be momentarily pleasurable, but he can’t solve all the problems by himself.

The World Series that you might win with Cliff Lee—I am not sold on the idea that 24 current Yankees plus Cliff Lee equals a World Series, but even if you win one—is like cake. It feels good at first, but then over the next five or six years, you have a perhaps rapidly declining asset who used to throw 91 with great location but now throws 89 with great location and misses 10 starts a year because his spine is shaped like the letter Q. I could be wrong about that, and in the infinite parallel universes that exist, there will be many in which Cliff Lee pitched terrifically for the length of the contract, but there will be many more where he will not, because that is the way of things.

This morning, you will no doubt read many columnists who say things like, "Now that the Red Sox have signed Carl Crawford, the Yankees must sign Cliff Lee!" I don’t quite understand this reasoning, much as I don’t understand the way that Crawford was supposed to be Plan B to Lee as Plan A. Saying that Crawford is an alternative to Lee is like saying you’re baking cookies and mustard is an alternative to sugar. It’s like saying that the alternative to your right leg is the Eiffel Tower. These are completely different players. If you need a left fielder, you pursue a Crawford. If you need a pitcher, you pursue Lee. Because you didn’t get Lee doesn’t mean that you now need a left fielder, and if you didn’t get Crawford it doesn’t mean you now need a pitcher. The needs stay the same, but the solution set changes.

The Yankees didn’t particularly need a left fielder, not when Brett Gardner may be about 90 percent of the player Crawford is. They do need starting pitching whether they get Lee or not. That is a problem they may well be able to solve internally, without anchoring themselves to another thirtysomething pitcher. The fecundity of the farm system in regards to pitching should ease a great deal of the pressure to acquire Lee. If the Yankees don’t sign him, they will not be empty-handed due to the kids—and not every kid will necessarily take three years to settle in the way Phil Hughes did or as Joba Chamberlain never has.

As for Crawford, I hate to disillusion anyone, but he is just not a huge run producer for the simple reason that he doesn’t get on base that much. Clarifying: he’s an asset. Discounting 2008, when he was hurt, from 2006 to 2010, Crawford averaged .308/.354/.474 and averaged 54 stolen bases (and 11 caught stealing) a year, all while playing excellent defense. You can’t be dismissive of that, although you have to be aware that it’s not unusual for left fielders to have on-base and slugging percentages right in that zone. It’s a slugger’s position, and 2010 was the first time that Crawford was, on a per-game basis, a top-five producer at the position.

Now that Crawford is with the Red Sox, you can, just maybe, start subtracting from your expectations. Crawford is a better hitter on turf than grass. His .291/.332/.425 rates on natural surfaces aren’t spectacular for the position. His career .275/.301/.406 at Fenway is abysmal. Stolen bases only add so much when you don’t hit overall. Add in that Crawford is going to be hanging around from age 29 to age 36 and the Red Sox could really regret this deal, and that is even if Crawford doesn’t have some kind of catastrophic leg injury. All he has to do is lose a few leg hits a year and there goes the batting average that is at the heart of his game.

It is understandable that the Sox wanted to take this risk, because left field killed them last year. The position of Teddy Ballgame, Yaz, and Rice gave them just .230/.303/.396. Whatever Crawford does for them, it will be better than that. Put him together with Adrian Gonzalez and does he boost them up to 95-win territory this season, all else being equal? Yeah, maybe he does. But by himself is the move something that should panic the Yankees? No, not at all.

There is more than one way for the Yankees to respond, of course. With Crawford, Gonzalez, Jacoby Ellsbury, J.D. Drew, and David Ortiz, the Sox are going to be very left-handed. A quality second lefty in the pen—you know, instead of, oh, Mitre—could go a long way towards keeping Boston down in the late innings. It would be nice if they could also acquire a catcher who can throw, but that would have been true of Crawford was still with Rays or any other team in the division where the Yankees were going to see him a lot.

The irony here is that, as I suggested above, the Yankees’ needs haven’t changed. The Red Sox make up a nice chunk of the schedule, but not all of it. The Yankees can’t build to beat only them, but everyone. Lee might help in the short term, but if the price is too high, they have other choices. Six months from now, Manny Banuelos could be ready to take his stuff up to the Bronx—again, just because the Yankees handled Hughes and Chamberlain like they’d never had a young pitcher before (in fairness, in many ways they hadn’t), not everyone has to advance by baby steps. There is a school of thought that says that once a pitcher reaches a certain level of proficiency in the minors, all a team achieves by keeping him down there is not greater learning, but a greater risk or arm injury as they roll pitches off his odometer.

That brings us back to cake, Lee, and Bengie Molina. I don’t really want to hear about Lee anymore, because I don’t view Lee as the Ultimate Nullifier, the Encyclopedic Panacea. There are other things that need to happen as well, but we don’t hear about them, because all the eggs seem to be in this one left-handed basket. It may also be that because of these numbers—31, 37, 35, 30, 30, 39, 39, 34, and 41—I can’t get too excited by the addition of a 32, no matter how good. The only way the Yankees are going to continue to win consistently is with the addition of a 22, and a 23, and even the odd 27 if need be. Maybe Lee is the next Warren Spahn and he will pitch well into his 40s. I have no way of knowing if that is the case. What I do know is that there was only one Warren Spahn, and you could wait on the corner for a long time before you see another.

At least for the moment, this is all speculation. We can talk more concretely when we have an actual move to analyze. With the Yankees apparently going to a seventh-year for Lee, I suspect that will happen soon, and along with Pettitte’s groin and A.J. Burnett’s mind, we will soon be thinking about Cliff Lee’s back. That’s what baseball is about—speed, athleticism… and braces.