Give a Man a Fish: Yankees active in Rule 5 draft

Share All sharing options for: Give a Man a Fish: Yankees active in Rule 5 draft 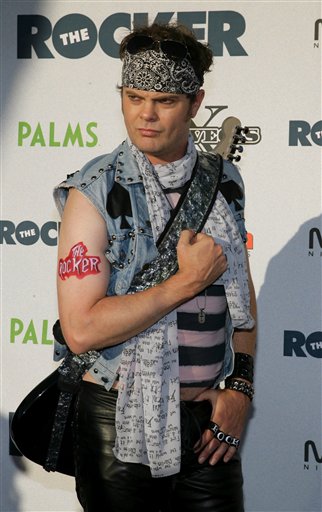 Rainn Wilson's character in the quickly forgotten 2008 comedy "The Rocker" was named Robert "Fish" Fishman, much to the likely chagrin of the Yankees top Rule 5 draftee. (AP)

The Yankees were surprisingly active in the major league portion of the Rule 5 draft, which took place this morning, as per tradition, on the final day of the winter meetings. That the Yankees lost a pair of pitchers in the draft was no surprise. The Yankees are flush with pitching talent at the upper levels of the minor leagues and have been regular targets in the draft in recent years.

As a quick reminder, players are eligible for the major league portion of the Rule 5 draft if they have been with their current organization for four years (five if they were signed before the age of 19) but are not currently on their organization's major league 40-man roster. If drafted, a player must remain on his new team's major league 25-man roster (or on the disabled list, a frequently exploited loophole) for the entirety of the coming season or be offered back to his original organization.

Last year, lefty Zach Kroenke was taken for the second year in a row and exercised his right to become a free agent after he failed to stick for the second time. Righty reliever Kanekoa Texeira, acquired in the Nick Swisher trade, actually stuck with the Mariners (and was later claimed off waivers by the Royals). In 2008, four Yankees were taken, Kroenke, righty starter Jason Jones, infielder Reegie Corona, and Ivan Nova. None stuck, but the Twins traded righty reliever Charles Notle to the Yankees in order to keep Jones. In 2007, it was righty reliever Michael Gardner who was drafted and later returned.

Of course, the Yankees big Rule 5 splash in recent years came last year when they traded Brian Bruney to the Nationals for the top pick, then wasted it on outfielder Jamie Hoffmann, who never had a prayer of making the team and was unceremoniously returned to the Dodgers before Spring Training was over.

That's not to imply the Rule 5 draft is full of riches. It's thrilling to remember that Johan Santana, Josh Hamilton, Joakim Soria, and Dan Uggla began their major league careers as Rule 5 picks precisely because such impact picks are so rare. For the most part, there's a reason these players were left unprotected, so much so that even Kanekoa Texeira, who posted a 4.84 ERA, 1.60 WHIP, and 1.32 K/BB in 61 1/3 relief innings but survived the entire season in the majors, can be seen as a successful acquisition.

Which brings me back to the two players the Yankees lost and the two they acquired, at least temporarily, in this year's draft. First the out-going Zax:

George Kontos, RHP, Padres Kontos will be 26 in June and was moved to the bullpen last year after returning from 2009 Tommy John surgery. A hard-thrower, the Northwestern product struck out more than a man per inning as a starter on his way up through Double-A, but his strikeout rate fell off in his nine Triple-A starts in advance of his elbow surgery, and he struck out just 7.6 men per nine innings across three levels in his return this year. The Padres, who were also the team that took Nova and Gardner only to return both, are obviously hoping that, further removed from his surgery, Kontos will get that number back up, but if they aren't impressed in Spring Training, he'll likely be back as the Padres' bullpen is a long way from desperate.

Lance Pendleton, RHP, Astros Rice University product Pendleton turned 27 in September and saw his first significant time at Double-A this past season. He acquitted himself well at pitching-friendly Trenton, and has a nice low-90s sinker, but there's not much else going on there and his strikeout rate plummeted while his home-run rake spiked in his brief stint at Triple-A to end the season. The Astros are a bad team, but unless they see potential for Pendleton in relief, he seems unlikely to stick.

As for the in-coming Zax:

Robert Fish, LHP, from Angels Fish is a lefty with a mid-90s heater who won't turn 23 until January. A former starter, he was moved to the bullpen full-time this year and briefly dominated the High-A California League (1.12 ERA, 14.1 K/9, 0 HR) before making the jump to Double-A, where he was done in by a ludicrous .457 BABIP, but still succeeded around the zone, striking out 10.2 men per nine innings against a not-disastrous 3.8 walks per nine. I'm sure the Yankees will continue to seek a free-agent LOOGY, and if they land one, they'll throw Fish back (like you didn't see that one coming), but if not, he gives them a budget alternative for the second-lefty spot behind Boone Logan.

Daniel Turpen, RHP, from Red Sox Sixteen teams opted not to make a pick before the Yankees took Turpen, who proved to be the last player taken in the major league portion of the draft. Not to be confused with the DC comics character Lieutenant Inspector Dan Turpin, Turpen was a College World Series star for Oregon State who was drafted by the Giants in 2007 and traded to the Red Sox at last year's trading deadline for former Yankee farmhand Ramon Ramirez. Turpen, who turned 24 on Jorge Posada's birthday, is a career reliever who has never started a game as a professional and spent all of 2010 in Double-A with decidedly ordinary results (4.30 ERA, 1.46 WHIP, 2.14 K/BB). Indeed, Turpen throws from a low arm-angle which has the usual effects of making him hard on right-handers but easy pray for lefties. I'm not quite sure what the Yankees see in Terrible Turpen, certainly his 5.40 ERA in the hitting-friendly Arizona Fall League didn't raise his stock, but I am quite sure he won't stick.

The big question for me here is, are the two pitchers the Yankees just added to the 40-man roster better than the two they left unprotected? Well, they're certainly younger, and one is left-handed, which gives him a certain cache. Given the choice between Fish and Kontos, I can see taking Fish given his youth, handedness, and velocity. I see little to recommend Turpen over Pendleton, however, though I don't see either having much of a major league future, even though Turpen is younger and throws a smidge harder. My guess is that in a few years the names Lance Pendleton and Daniel Turpen will mean as much to the average Yankee fan as those of Michael Gardner, Jason Jones, and Zach Kroenke.

Hat-tip to Baseball America's Jim Callis for his twitter-length scouting reports on all of the major league Rule 5 draftees.