One of Our Own as a Member

Share All sharing options for: One of Our Own as a Member

You know, we always called each other good fellas. Like you said to somebody: You're gonna like this guy. He's all right. He's a good fella. He's one of us. You understand? We were good fellas. Wiseguys. But Jimmy and I could never be made because we had Irish blood. It didn't even matter that my mother was Sicilian. To become a member of a crew you've got to be one-hundred percent Italian so they can trace all your relatives back to the old country. See, it's the highest honor they can give you. It means you belong to a family and crew. It means that nobody can [expletive] around with you. It also means you could [expletive] around with anybody just as long as they aren't also a member. It's like a license to steal. It's a license to do anything. As far as Jimmy was concerned with Tommy being made, it was like we were all being made. We would now have one of our own as a member. --Goodfellas (1990) 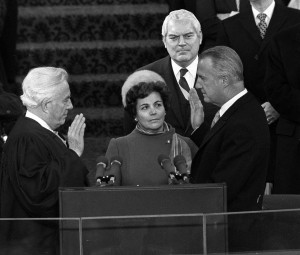 Like Vice-President Spiro Agnew, Jay Jaffe will be the subject of a great moment in inaugural swearing. (AP)

When Henry Hill speaks those words in Goodfellas, he's building up to a very rude surprise about who is an insider and who is not. I think we need have no such worries about the honor received by my old friend and Pinstriped Bible wingman Jay Jaffe, whose campaign to bring rationality and high-quality beer to the Hall of Fame has resulted in his addition to the Baseball Writers Association of America. Yes, one of our own is now on the inside. Jay can claim proud allegiance to the organization that gave us Murray Chass. Or maybe that was the New York Times. Either way, we get the Chass we deserve, so I am not sure what we have done right to have Jay in the same place.

I mock, but only because it's my nature. I met Jay years ago, before he had turned pro, and I am proud to have played a small part in his drafting and development, and applauded as he has become a popular, quotable writer and pawky media presence. I could not be more pleased that now he may walk into any ballpark in America and ask a question about the shortstop's declining range. And that's even if the ballpark is not Yankee Stadium and Derek Jeter happens not to be around that day. He can ask it of anyone. He can ask it of Jason Varitek. Why? Because he can.

Again, many congratulations to my pal and respected colleague. I look forward to seeing the results of his newfound access, particularly here at the Pinstriped Bible.