As has been typical at this time of year even before Steve, Cliff and I joined forces as the Bible Study Group, the three of us are all neck-and-a-half deep in our work for the Baseball Prospectus annual — particularly Steve, who edits the 600-page, 1,600 player behemoth — and some of the stories pertaining to the Yankees that might be addressed in this space have thus far evaded comment. So consider this the tying up of a few loose ends. 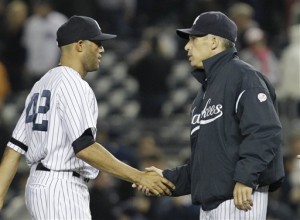 Mariano Rivera has struck a deal with the Yankees and is back in the fold (AP).

Item: Mariano Rivera re-signs with the Yankees for a two-year, $30 million deal. Relative to the attention afforded to the Derek Jeter soap opera, the Yankees' quest to re-sign a man who's arguably the greatest reliever of all time and the greatest postseason performer of all time flew underneath the radar. It certainly helped the great one's negotiating position that even at the age of 40, he was coming off a strong season, saving at least 30 games for the eighth straight year and finishing with an ERA under 2.00 for the seventh time in that span; by that reckoning, it was entirely justifiable that he wind up with an annual salary that matched his expiring three-year pact.

A closer look shows that Rivera made fewer appearances and pitched fewer innings than in any season in the last eight due to some second-half aches and pains. Perhaps more unsettling is the fact that his strikeout rate, which had been above 9.0 per nine in each of the last three seasons, fell to 6.8 per nine, but his cutter remained as difficult to hit as ever; batters managed just a .183/.239/.254 line against him, and his 0.3 HR/9 was his lowest rate since 2005.

The one wrinkle in negotiations is that the Red Sox reportedly made Rivera a similar two-year offer, and the Angels reportedly offered him a three-year deal. It's nearly impossible to envision that Rivera would have actually jumped to those teams, and sources differ as to whether agent Fern Cuza reached out to them or they called him, but the effect was the same: the outside interest forced the Yankees to guarantee the second year of the contract instead of getting away with one year and an option. In the end, it's just a typical bit of negotiating hardball.

Item: Lance Berkman signs with the Cardinals for a one-year, $8 million deal. I wrote about the possibility of the team's late-season platoon DH rental winding up with the Rockies, and from where I sat, I couldn't see the fit given the presence of first baseman Todd Helton, the spacious Coors Field outfield, and the facts that Berkman hadn't seen any time in the outfield since 2007, and that age and knee woes have almost certainly compromised his range since then. I couldn't see much fit in St. Louis either given the presence of Albert Pujols at first and Matt Holliday in left, but that didn't stop the Cardinals, who after initially planning to play Berkman in left, now say they'll put him in right field, where he's more comfortable and where he spent more time in 2006 and 2007. Between that and the fact that manager Tony LaRussa sees him as an everyday option rather than a liability against lefties, this has all the makings of a rough go for the Big Puma.

Item: Brian Cashman dines with Carl Crawford and his agent. I don't think there's really much to this despite a source saying the Yankees are "very interested" and that "the yams were delicious," but it's been suggested the Yankees could afford to pay both Crawford and Cliff Lee. The Yankees' pursuit of Lee has proceeded at a glacial pace which has been dictated by the pitcher's agent, who didn't want to receive offers before the Winter Meetings, and then skipped town before they ended. As frustrating as that may be for the Yankees, what it's done for Lee is dry out the secondary market for starting pitching market, as the most desirable free agents — none of them the caliber of Lee, but all of them (Hiroki Kuroda, Jake Westbrook, Jorge de la Rosa, Jon Garland) serviceable enough to slot into the front five — have come off the board.

What the Yankees do by making sure they're seen with Crawford is signal back to Lee's camp that they've got other ways they can spend their hundreds of millions of dollars. Should Lee sign elsewhere, the Yankees would then sign Crawford and use either Curtis Granderson or Nick Swisher to obtain a starter, though again, one that's not as good as Lee. Additionally, just by talking to Crawford, they probably raise his price tag an extra million or two per year, doing a solid favor for a player they're unlikely to actually land but costing a rival a bit of extra money. In any event, it's been thought that the Angels are the most likely landing spot, but Crawford isn't going to cost any less than Jayson Werth's seven-year, $126-million deal.

Item: Jay Jaffe voted into the Baseball Writers Association of America. Having written about this not once but twice already and been the subject of the previous piece, I'll limit myself in this venue to a tip of a cap and a big thanks to Steve for the ongoing part that he's played in my career as a colleague and friend, to Cliff, who's been a great colleague and friend over the years as well, and to the readership of the PB, which has made this a very gratifying outlet for me to write about the Yankees over the past four months. I started blogging at Futility Infielder nearly 10 years ago to fill a niche that was being underserved, and writing about the Yankees from a different point of view than the mainstream media was offering came easily to me. As my responsibilities at Baseball Prospectus have grown, I wasn't able to do that as often as I would have liked, but writing for the Pinstriped Bible audience has allowed me to scratch that itch once again, and it's been an absolute gas.